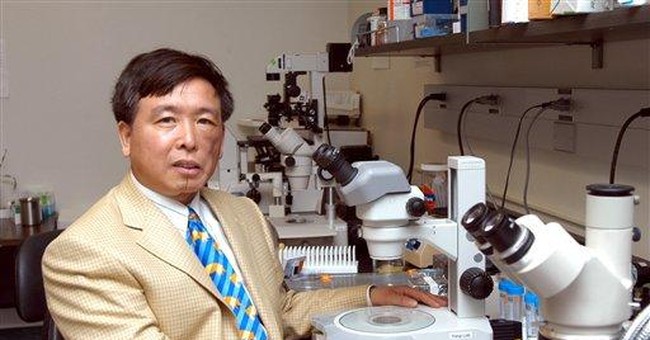 Without so much as a by-your-leave from the federal government, scientists continue to unlock the secrets of the cell. The most recent advance involves a new, safer way to make adult skin cells behave exactly like embryonic stem cells.

The breakthrough that permitted researchers to reprogram skin cells to behave like so-called pluripotent stem cells (meaning they can grow into any organ or cell type in the body) actually came in 2006. Researchers used viruses to carry new genetic information into the cells. Showing that an adult cell could be manipulated to become a stem cell was an incredible breakthrough with enormous political implications. But the use of viruses carried the risk of increasing rates of cancer and the danger of other contaminants. The new technique, announced March 2, apparently uses a structure called transposon, which, according to Bloomberg News, is "a section of DNA that can move as a block within the genome of a cell." After it reprograms the cell, it can be removed by the apparently harmless addition of an enzyme.

"It's very exciting work," Robert Lanza, a stem cell researcher at Advanced Cell Technology in Massachusetts, told the Washington Post. "With the new work, we're only a hair's breadth away from the biggest prize in regenerative medicine -- a way to create patient-specific cells that are safe enough to use clinically."

We'll see. As the parent of a teenager with Type I diabetes, I've learned to take predictions of imminent clinical breakthroughs with several large grains of salt. The key thing about this news is the impressive multiplicity of approaches researchers have applied to the problem. And yet, even as science is finding ways to sidestep the moral and political minefield of embryonic stem cell research, advocates for using days-old human embryos will not yield. Here's the Washington Post again: "Scientists, however, while praising the work as a potentially important advance, said it remains crucial to work on both types of cells because it is far from clear which will turn out to be more useful."

Advocates of embryonic stem cell research (who, by the way, are waiting impatiently for President Obama to reverse President Bush's limitation on the kinds of research the federal government will fund) seem almost not to welcome alternatives to embryonic research. It's as if agreeing to pursue other methods acknowledges a moral problem they wish to deny. Their arguments in favor of using embryos attempt to minimize the moral weight of the situation. "These are embryos left over from the in vitro fertilization process. No one is using them anyway. They might as well be used for the betterment of mankind."

Hmm. Well, the cheerleaders for embryonic research probably are the same people who don't want to drill for oil in ANWR. Never mind that the tiny patch of permafrost is not being used anyway -- can't be used for anything else as a matter of fact. Never mind that it could reduce our dependence on other sources of oil. The principle of maintaining nature's purity is too important.

The "nobody wants them" argument is morally bankrupt, but completely consistent with our culture -- a culture that grants human dignity only to those people who are "wanted." A couple a weeks ago, as National Review's Jay Nordlinger noticed, a Florida woman visited an abortion clinic for a late -- 23 weeks -- second trimester abortion. Instead, her daughter was accidentally born alive (what the AP called a "badly botched abortion"). After the squalling infant was delivered, an owner of the clinic cut the umbilical cord, and tossed the baby into the trash. Now police are investigating. Murder charges may be filed.

This is Alice in Wonderland territory. That's what our abortion culture has given us. It is perfectly legal to perform an abortion at 23 weeks gestation, an age when other babies have survived outside the womb. But if the child is accidentally delivered alive first, it's murder. "She came face to face with a human being," the woman's lawyer explained to the AP. "And that changed everything." Nonsense. It changed nothing. But this woman is hardly alone. The majority that favors harvesting human embryos for their stem cells is engaging in the same kind of self-delusion: If I don't look at it, it's not there. They can flatter themselves all they want that they are "pro-science," but in fact they are trampling upon human dignity.