'We Love to Talk,' Declares Biden 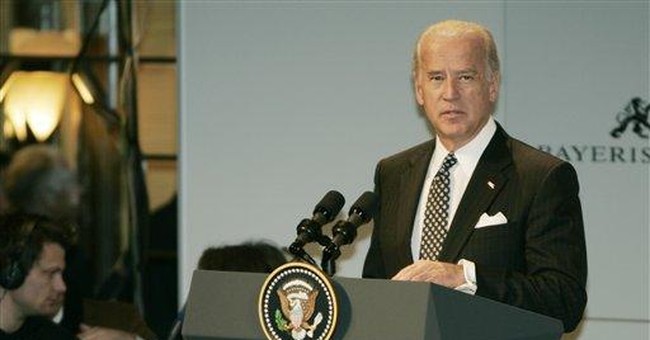 Vice President Joseph Biden delivered the Obama administration's first major foreign policy address last week at the Munich Security Conference. It was just the sort of thing Europeans tend to like. Biden offered bouquets to diplomacy, to multinational institutions, and to respecting other cultures. "It was not an accident," he told his continental audience, "that (Obama) gave his very first interview as president to Al-Arabiya."

The new administration is entitled to pursue whatever foreign policy they think best in the next four years (God help us). But attempting to falsify the history of the Bush years should not go unremarked.

Just as he did during the campaign, when then-candidate Biden declared that we had "kicked Hezbollah out of Lebanon," among other whoppers, Biden is again (presumably with the full support and encouragement of President Obama) inventing his own history to suit his political purposes.

"Our administration is reviewing policy toward Iran," Biden declared, "but this much I can say: We are willing to talk."

Unlike whom? Obama's predecessor? The Bush administration held at least 28 separate meetings between Americans of ambassadorial rank and Iranian officials during the eight years of the Bush presidency. According to the Middle East Forum, more than 16 meetings were held in Geneva and Paris from November 2001 through December 2002 between Deputy Assistant Secretary of State for Near Eastern Affairs Ryan Crocker and senior Iranian Foreign Ministry officials. A number of high-level direct negotiations were conducted in 2003, and a number of indirect contacts were maintained through the Europeans between 2003 and 2007. In March 2007, U.S. Ambassador to Iraq Zalmay Khalilzad held a meeting with an Iranian team at a conference of Iraq's neighbors in Baghdad. Khalilzad's successor, Crocker, also met with the Iranian ambassador. Thus the U.S. gave full backing to a (fruitless) European Union initiative to negotiate with Iran about its nuclear program.

Biden announced last week, as if there were something new under the sun, "We are willing to talk to Iran, and to offer a very clear choice: continue down your current course and there will be pressure and isolation; abandon your illicit nuclear program and support for terrorism and there will be meaningful incentives."

Ah, "meaningful incentives." Why didn't someone think of that before? Let's see, here's a CNN clip from May 8, 2008: "The United States has signed off on a European plan that would offer increased incentives for Iran to suspend its uranium enrichment program, senior State Department officials said Thursday. ... The United States, along with the other nations, has been following a 'dual track strategy' with Iran, which includes tightening sanctions on the regime while offering incentives if Iran suspends its enrichment activities." Page back through the past eight years and you can find the identical story over and over again. The U.S. and the Europeans have been perpetual Charlie Browns running to kick the football to the Iranian Lucy.

So now the Obama Administration proposes to do exactly, exactly the same thing. But they do so loudly proclaiming how different they are. And the clock ticks, and Ahmadinejad -- who affirmatively desires global chaos because he believes it portends the arrival of the 12th imam -- gets ever closer to a nuclear weapon.

"We do not believe in a clash of civilizations," said Biden. Another straw man. The Bush administration never framed the war on terror as a clash of civilizations and in fact made every effort to remind the world that we respected Islam. We heard that Islam was a "religion of peace" more from Bush and Co. than we ever heard it from leading Muslims. One of President Bush's first stops in the days after 9/11 was the Islamic Center in Washington, D.C. And it was Bush who began to observe Ramadan at the White House.

The new administration betrays a touching faith in diplomacy. Democrats always do. What they have never seemed to appreciate is that diplomacy without the threat of force is as effective as a watchdog with a muzzle. Perhaps Obama might consider a muzzle the next time Biden goes for an outing.