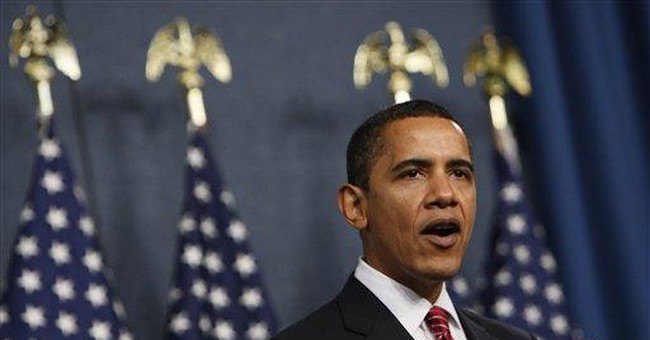 In his inaugural address, President Obama promised to initiate a "new era of responsibility." These heights were to be scaled following a successful campaign to transcend the "old politics" of Washington, D.C. Two weeks is a short period of time on which to judge an era, so let's just say it hasn't gotten off to a roaring start.

The hallmark of this new era is apparently the cap on executive compensation for banks taking bailout money from Uncle Sam. This makes Democrats giddy, as they despise high salaries for executives, except when those executives are Democratic former members of Congress, former Democratic presidents, and trial lawyers. Some of us find the whole notion of government caps on income obnoxious, but will shed no tears for executives who will have to make do with $500,000. If they had run their companies more competently, they wouldn't be dancing to Uncle Sam's tune. (Here is an under-reported story: the failure of boards of directors to fulfill their fiduciary responsibilities to shareholders by curbing unwarranted executive compensation. Where were the corporate raiders when we needed them?)

If responsibility means anything, it means being accountable for one's behavior. Tom Daschle, Nancy Killefer, Bill Richardson, and Timothy Geithner -- that's a pretty significant percentage of appointees to show up with ethical clouds. Richardson, the abortive Secretary of Commerce, apparently was caught up in a Blagojevich style "pay to play" scheme in his home state of New Mexico. Exit Richardson. Nancy Killefer, tapped by Obama as the administration's "performance czar," reportedly failed to pay unemployment taxes for her household help and had a tax lien imposed on her home by the District of Columbia. Tom Daschle failed, among other things, to pay taxes on a limousine and driver provided by a "good friend." He didn't know, the former majority leader of the U.S. senate explained, that the IRS considered the limo income. Until the evening before Daschle's withdrawal, President Responsibility had stood behind him. Asked at a Monday night meeting if he still supported Daschle, Obama said "Absolutely." But the next day, the president acknowledged that he had "screwed up," and that there cannot be two different standards, "one for prominent people" and another "for ordinary folks who have to pay their taxes."

Good TV. Very good TV. Except for one thing: Survey the cabinet table and there in a place of honor sits Tim Geithner at the Treasury Department. This "prominent person," whose department oversees the IRS, failed to pay Social Security and Medicare taxes for four years running. A number of observers believe that if Daschle had been named first, he would be holding his post and Geithner would have been the one to bow out rather than the reverse. There certainly doesn't seem to be any principled difference between the two. Which kind of tax avoidance is more culpable -- failing to report income or simply failing to file? Hmm.

Everywhere you look in American life today you see a desperate need for more responsibility. But the stimulus bill the Obama Administration has taken ownership of actually encourages irresponsibility rather than the reverse.

Certainly governors and state legislatures are not being held accountable for their reckless spending sprees. As Stephen Spruiell has reported in National Review, $79 billion of the "stimulus" bill is devoted to the "State Fiscal Stabilization Fund." What's that? It's a system by which those states that have not hugely overspent their available tax revenues, like Indiana, North Dakota, and Virginia, will pay for those states, like California and New Jersey, that have. Another $89 billion is slated to help states meet their obligations to Medicaid -- a program that is everywhere in deficit. But rather than reform the bottomless pit that is health care spending by government, the Democrats propose to expand the government's role with SCHIP. Government, as Milton Friedman taught, has vastly increased the percentage of national wealth spent on health care through tax exemption and Medicare/Medicaid. Friedman estimated that 60 percent of the total increase in costs between 1946 and 1997 was attributable to those two things.

We're bailing out the car companies and the banks and the states and let's not forget ACORN (they can apply for some of the $4.19 billion in "neighborhood stabilization activities"). We don't ask how you used the money we gave you last year or whether you got results. Remember (oh, how quaint it seems now!) when Obama promised to go through the budget line by line and zero out those programs that weren't working? Good or bad, effective or not, straight or crooked, everyone is being bailed out now. It's a new era all right, but responsibility is only dimly visible in the rearview mirror.