Why McCain Didn't Land His Punches 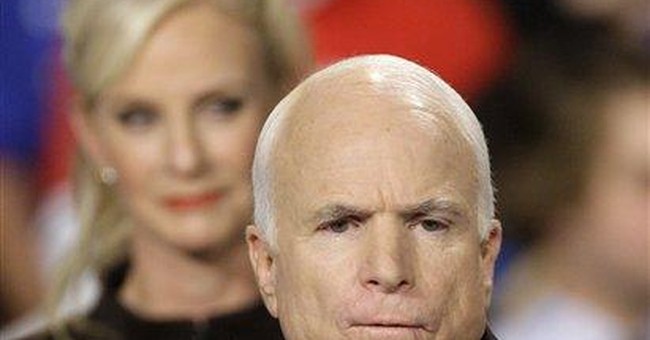 John McCain had his last big opportunity to score heavily against Barack Obama on Wednesday night. And while he turned in his best debate performance so far, he fell short.

In order to reset the table for the remainder of the campaign (and it is very late) McCain needed to explain to voters that Obama hails from the further reaches of the left wing of the Democratic Party. While voters have grown accustomed to Obama's face, they don't yet know his true beliefs. McCain should have linked Obama firmly to Nancy Pelosi and Harry Reid, and stressed that the contest has become one between, on the one hand, the traditional American approach to the economy, which strongly favors the free market with appropriate regulation; and on the other, the European brand of socialism, which is government-heavy, bureaucratic, and intrusive. He should have said that we have arrived at a fork in the road and the decision voters will make on Nov. 4 will have consequences for decades.

Instead, McCain offered up a half cheer for the free market and capitalism -- like his promise to Joe the plumber that he would not raise his taxes, and mangled his criticism about Obama's relationship with Bill Ayers. Ayers, as Andy McCarthy of National Review, among others, has tirelessly pointed out, is not just a "former terrorist," he is a committed revolutionary who detests this country (he posed for a magazine photo standing on the U.S. flag -- not in the 1960s but in 2001). That Obama was comfortable with Ayers (whose "education reform" includes teaching kids to overcome "capitalist hegemony") is highly relevant to the kind of president Obama would be. (And while we're on the subject, Obama's response to the Ayers matter last night was downright Clintonian in its lawyerly parsing. Obama flatly denied that he had "launched" his political career with a coffee in Ayers' living room. But there was a coffee in Ayers' living room for Obama when he first ran for the state senate. It's just that the Obama campaign now claims that the Ayers coffee was not the first. So the word "launched" is not accurate. See?)

Maybe that was all fine -- even beneficial in this tough year for Republicans -- until late September. After that, with markets in turmoil, the game changed. Democrats, sensing the sort of breakthrough they've been hoping for since 1932, recast the election as a referendum not just on George W. Bush but on the free market (which Obama likes to call the "the trickle-down, on your own" philosophy).

McCain does not appear to have grasped the nature of the new challenge. He continues to intone "people are hurting, people are angry" as if to show that he's in touch. Instead of presenting a coherent narrative about the Democrats who did so much to instigate the current crisis by insisting upon subprime mortgages and resisting calls to regulate Fannie Mae and Freddie Mac, he directs his fire at greed on Wall Street. Well, presidents have lots of power, but no president is ever going to be able to control or regulate greed. Sen. McCain likes to punish those he considers corrupt -- notice how often he refers to former antagonists who are now "in jail." But voters, I suspect, really don't care so much about punishing greed as they care about their own jobs, health care, and 401(k)s.

In the time that remains, McCain should argue that voters have a lot to lose if Obama is elected. McCain has a good health care reform package that would save money for all but the highest earners while enhancing competition, reducing costs, and preserving what is without doubt the finest health care system in the world. Obama's plan would encourage employers to stop providing health coverage, thus undermining the private system and pushing us, probably irreparably, in the direction of nationalized health care.

Obama will raise taxes and adopt protectionist trade barriers. As McCain noted in the debate, the last president to do that was Herbert Hoover. McCain's final push should emphasize that just because things are bad, that doesn't mean they couldn't get worse. Much worse.