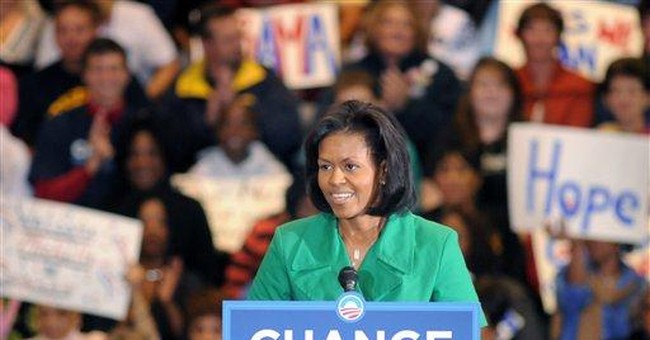 I had an experience wearing a headscarf last week that was culturally and politically interesting. More on that in a minute. It made me think of Michelle Obama.

Last year, Mrs. Obama introduced her husband at a campaign event in Council Bluffs, Iowa. Like so many of Mrs. Obama's speeches, this one reflected a jaundiced view of her country. She began by telling the crowd that her husband was "special." Nothing very unusual there. But then she offered a glimpse (she said) into their private discussions prior to his run for the White House: We talked about it and asked people what they were concerned about and it was fear. They were afraid. "It was fear raising its ugly head. Fear in one of the most important decisions we would make. It was fear of everything. Fear that we might lose. Fear that he might get hurt. Fear that this would be ugly. Fear that it would hurt our family. Fear."

Now it isn't crazy for a wife to fear for her husband's safety when he runs for political office. Rumor has it that Alma Powell discouraged Colin Powell from running for president out of similar concerns. But Michelle Obama was not talking just about the crazed gunman who might be lurking in a crowd somewhere.

"But you know the reason I said yes?" she continued. "I am tired of living in a country where every decision we've made over the last 10 years wasn't for something -- but it was because people told us we had to fear something. We had to fear people who look different from us, fear people who believed in things that were different from us. I am so tired of fear and I don't want my girls to live in a country, in a world, based on fear."

So by Michelle Obama's lights, the last decade has featured Americans being manipulated into fearing those are different from us, presumably by cynical politicians. "That's why -- and we have to admit it -- we are in this war. We are in this war because for eight years we were told to be afraid."

Right. There was no unprovoked attack on American civilians killing thousands of innocent men, women, and children. There was just a concerted effort by Dick Cheney, Rush Limbaugh, and Donald Rumsfeld to make us fear people "who believed in things different from us."

Actually, I think Americans -- for good or ill -- have exactly the opposite tendency.

Last week, I happened to wear a scarf tied tightly around my head for a day. The reason isn't important. But I noticed something. Everywhere I went and in everything I did, people were extra polite and nice to me. Cars let me cut into their lanes. Clerks in stores were extra cheery. Now, I'm a friendly sort and usually get treated well, but this was noticeably better. And then it hit me -- people must have assumed I was a Muslim and were determined to show that they bore me no ill will.

My friend Danielle Crittenden really did perform an experiment. She donned a Saudi-style full burka and went about her daily life wearing it for a full week. Her account is available here. She, too, found that Americans were extra friendly to a black clad shadow.

Showing nothing but her eyes, she even showed up at National Airport with a one-way ticket and no baggage. To be sure, they pulled her aside for extra screening, but the female TSA agent assigned to wand her asked tentatively if it was "culturally okay" to ask her to remove her face covering. "'When women like you come through, we don't know what's 'correct.' Like if I want to see that your face matches your ID, can I ask you to show me your face?'"

Crittenden was dumbstruck: "It's a good thing I was wearing a mask so the guard could not see my astonishment. The security agents at the airport serving the nation's capital--bare seconds of air distance from Capitol Hill, the Pentagon, the White House--did not feel entitled to check the identities of veiled women. Clearly, they hadn't even received any special sort of instructions about it."

One can easily imagine Mr. and Mrs. Obama chatting about xenophobic, narrow, hate-filled America over their toast and coffee in the morning -- he lamenting their attachment to religion and guns, she decrying their fear-mongering hatred of The Other. It's enough to make one decline her invitation, offered that afternoon in Council Bluffs, to "help us change, transform this country in a fundamental way."