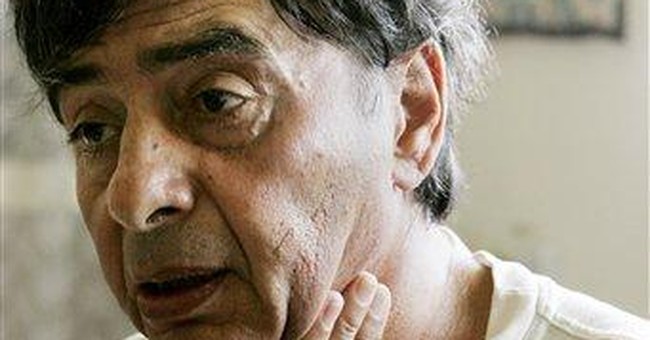 What can you say about a people who welcome a child murderer as a hero?

Most Americans are familiar with the brutal murder of wheelchair-bound Leon Klinghoffer on the cruise ship Achille Lauro in 1985. Terrorists led by Abu Abbas (who was later given safe haven in Baghdad by Saddam Hussein) took the ship captive and threw Klinghoffer overboard. But few recall that the ship was seized to bargain for the release of, among others, Samir Kuntar from an Israeli prison.

Kuntar had taken part in an earlier terror attack. In 1979, as a 16-year-old, he and four others had traveled to northern Israel by boat from Lebanon and come ashore in the seaside town of Nahariya. At midnight, Smadar Haran recalled, they burst into her apartment building. Peering out to see what the noise was, Smadar, mother of two, slammed shut her apartment door when she saw the terrorists -- but too late. Kuntar had glimpsed her. Her husband, Danny, helped Smadar and their younger daughter, 2-year-old Yael, to squeeze into a crawl space above the bedroom.

Smadar wrote later, "I will never forget the joy and the hatred in their voices as they swaggered about hunting for us, firing their guns and throwing grenades." As police began to arrive, Kuntar and the others dragged Danny and 4-year-old Einat down to the beach. With Einat watching, Kuntar shot Danny in the head and then threw his body into the surf. Kuntar then repeatedly smashed Einat's head against a rock with his rifle butt, killing her, too. Yael did not survive the attack either. In an effort to keep the baby from crying and betraying their hiding place, Smadar had accidentally suffocated her.

This week, Kuntar, dressed in fatigues and sporting a Hitlerian mustache and haircut, walked down a red carpet arrayed for him in Beirut. The government closed all offices and declared a national day of celebration. Tens of thousands of Lebanese cheered, waved flags, threw confetti, and set off fireworks as Hezbollah staged a rally to celebrate their "victory" over Israel. Mahmoud Abbas, the "moderate" leader of the Palestinian Authority, sent "blessings to Samir Kuntar's family." PA spokesman Ahmad Abdul Rahman sent "warm blessings to Hezbollah on the return of the heroes of freedom headed by the great Samir Kuntar."

The statement went on to laud the "heroic" actions of "martyr" Dalal Mughrabi, whose body was returned to Lebanon. She had participated in the worst terror attack ever against Israeli civilians, the hijacking of a tourist bus in which 37 people including 12 children were murdered. The Palestinian Authority spokesman took the opportunity to vow that the Fatah party "will continue to struggle in the way of the pure Martyrs, until the state is liberated and the Palestinian state is established with Jerusalem as its capital." Kuntar, acknowledging the adulation of the crowd, took the microphone and declared, "I return from Palestine only to go back to Palestine."

And what did Israel get in return? Two corpses. The bodies of Eldad Regev and Ehud Goldwasser, the two reservists whose kidnapping in 2006 prompted the botched and inconclusive Israel/Hezbollah war. After this shameful and stupid trade of live terrorists for dead soldiers, Hezbollah has achieved its goal. In 2006, Hezbollah had crossed the border and attacked two Israeli border patrol jeeps, killing three and wounding two. Two others, Regev and Goldwasser, also believed wounded in the attack, were kidnapped and taken into Lebanon on orders from Hezbollah leader Sheikh Nasrallah, who thought he could demand the release of all Lebanese terrorists in Israeli prisons in exchange for the two soldiers. (Hamas simultaneously kidnapped Gilad Shalit in the south.) Israel at first responded with a war. But while most of the civilized world rooted for the Israelis to destroy Hezbollah in southern Lebanon, Israel flinched and conducted a feckless conflict. Thousands of Lebanese and Israeli civilians were hurt and displaced, but nothing was settled -- until now. Now Hezbollah has achieved total victory.

Every Israeli is now at much higher risk for kidnapping and murder. Why in the world should Israel's enemies shrink from murdering their captives if they get just as much for corpses? Hamas continues to hold Shalit in Gaza. His life expectancy has just been radically reduced. It's inspiring that the Israeli government (like the U.S. armed forces) is devoted to bringing their people home dead or alive. But not like this. Not like this.

At the welcoming ceremony for Kuntar and his fellow terrorists, Sheikh Nasrallah made a brief appearance. In company with Lebanese president Michel Suleiman, Prime Minister Fouad Siniora, and Speaker of Parliament Nabih Berri, Nasrallah hugged and kissed Kuntar and the rest. "The time of defeat is long gone," he said. "Today is the time of victory."

Who can deny it?