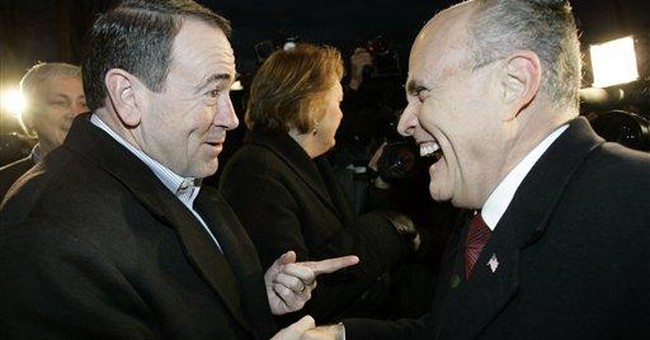 Memo to: Republican candidates of all stripes
From: A well-wisher
Subject: How to Win Again

As Republican primary and caucus voters conspire to deny the party a front-runner -- one state for you, another for you, and a third for the other guy -- some observers have speculated that the party doesn't quite know its own identity. Among party regulars, the lament has gone up to Heaven, "Why can't anyone simply propound a Reaganite agenda and unite us?"

A fascinating new book, "Comeback," by former George W. Bush speechwriter David Frum, offers what may seem to some a startling answer: Drop Reagan. He is no longer relevant to the challenges we face as a party or a nation. He was perfect for his time. But that time has passed.

When Ronald Reagan ran in 1980, the top marginal tax rate was 70 percent. Inflation was eroding the purchasing power of consumers. Overregulation strangled businesses. One out of every three households had been victimized by crime within the previous 12 months. The Soviet Union had added 12 new countries to the communist domain in the previous decade. American hostages in Tehran were paraded on international television. Welfare rolls were expanding.

So are conservatives victims of their own success? To a point, yes. Two decades of steady reductions have made the tax code so steeply progressive that most Americans pay very little income tax (the payroll tax is another matter), and 29 million income earners no longer pay any income tax at all. The top 1 percent of taxpayers now pays more than one-third of total taxes. Alas, Frum writes, "The top 1 percent may make a disproportionate amount of money. But they still cast only 1 percent of the votes." Is it therefore surprising that poll after poll find Americans less interested in tax-cutting and more concerned about deficit reduction?

The story is similar regarding the other issues that made Reaganism so compelling. Inflation was painfully wrung from the economy in '82 and '83. The Soviet Union was brought low. Crime has dropped to levels not seen since the 1960s. Bipartisan efforts have reduced regulation. Welfare reform was finally accomplished in 1996.

But it wasn't just the triumph of conservative solutions that left the Republican Party without a unifying theme; it was also the conduct of Republicans in power. Complacency, corruption and lack of imagination have combined to undermine the Republican brand.

Political parties are often slow to adapt to changing circumstances. Republicans were waving the bloody shirt years after the Civil War had ended, and Democrats attempted to run against Herbert Hoover decades after the Great Depression. That's where whip-smart intellectuals like Frum come in. He picks off sloppy conservative thinking like a sniper and serves as a pathfinder in the complicated world we will soon confront.

The reforms he proposes are too numerous to summarize here. A taste will have to suffice until you reach your bookstore:

A carbon tax. That's right. To discourage the use of gas and oil and to fund more tax breaks for young families.

Cut the inheritance, corporate, capital gains and dividend taxes to zero to encourage wealth creation. Modify an idea from Bill Clinton and permit "USA accounts" within Social Security that would permit even minimum wage workers to save a small fortune. Frum runs the numbers: "That should be our conservative and Republican promise to American workers: 'Every American a millionaire by age sixty-seven!'"

Reform the nation's scandalous prisons. Conservatives put all those people behind bars to make the rest of us safe, Frum argues, but it is intolerable that there are 240,000 prison rapes yearly (compared with 90,000 rapes in the larger society).

Negotiate with Iran, sure, but resolve to deny nuclear weapons to them, whatever it takes.

Limit immigration to the skilled, and close our doors to radical Islamists, even if they have Ph.D.s.

"Comeback" rockets along at a brisk pace and covers an incredible amount of ground in just 178 pages. No one will agree with every single proposal. But the kind of fresh thinking David Frum has displayed here is just what the doctor ordered -- even if the patient may not yet know he's sick.