The Audacity of Lies 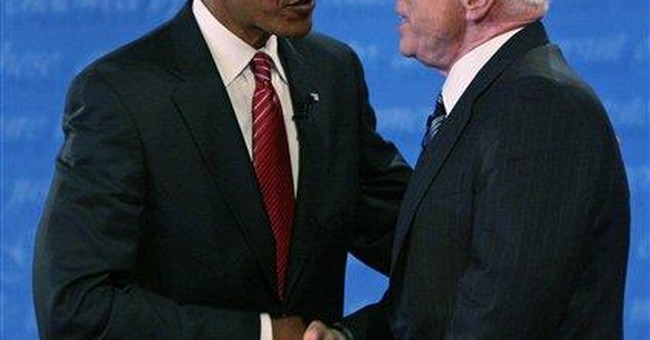 I understand what it means to fight hard, but fight fair. After a lifetime of making my living offering opinions on the radio, I try and follow that philosophy each and every day.

Many of us wear our beliefs on our sleeve. You know where we stand on issues, ideology and politicians.

But we don’t lie.

We don’t make stuff up out of whole cloth in a desperate attempt to win the argument.

We find it repulsive to try and trick people into believing things that aren’t true.

And after this week’s third and final presidential debate, I was dumbfounded by the audacity of lies that came from the Democrat candidate on that Hofstra University stage.

I know that calling someone – anyone – a liar is a serious charge. But in just one brief period of time, Sen. Obama demonstrated his enthusiasm for outright falsehoods, over and over again.

The lies ranged from the silly to the intricate.

At one point, Sen. Obama insisted that John McCain’s campaign has produced “100% negative” campaign ads. When Sen. McCain tried to interrupt and say that wasn’t true, Obama said, “Absolutely it is.”

So Sen. McCain is guilty of negative campaign commercials “100 percent” of the time, Sen. Obama?

I have a transcript of the extraordinary campaign ad that the McCain campaign produced and aired nationally the day that Obama gave his acceptance speech at the Democratic National Convention in Denver. The spot was voiced by Sen. McCain himself.

Senator Obama, this is truly a good day for America. You know, too often, the achievements of our opponents go unnoticed. So I wanted to stop and say, congratulations. How perfect that your nomination would come on this historic day. Tomorrow, we’ll be back at it. But tonight, Senator: a job well done. I’m John McCain and I approved this message.

What a blistering, negative ad, huh?

Believe me, the Obama campaign hasn’t spent one dime on any kind of message that contained that kind of class and grace directed towards Sen. McCain. For Obama to suggest that a campaign capable of that kind of positive message in the middle of a hard-fought campaign has been “100 percent negative” is simply a downright lie.

When Obama’s vote for the Illinois version of the Born Alive Infant Protection Act came up in the debate, Obama lied again. He claimed: “There was already a law on the books that required lifesaving treatment, which is why…I voted against it.”

At no point in history has Sen. Obama or his colleagues ever cited this 1975 law as a reason for voting against the bill in Illinois. More importantly, the law only protected “viable” infants – and left the meaning of “viable” up to the abortion doctor who just failed to kill the baby in the womb.

And finally, one of the biggest lies of all, that Republicans failed to reign in wild, foaming-at-the-mouth supporters who screamed, “Kill him” when Obama’s name was mentioned.

When Obama brought this allegation up during the debate, he repeated a charge that, according to the U.S. Secret Service, appears to be the fabrication of a small-town newspaper reporter named David Singleton.

When the agent in charge of the Secret Service field office in Scranton read the reporter’s claim, that a man was heard yelling, “Kill him” after a congressional candidate mentioned Obama, he was “baffled.” After all, Agent Bill Slavoski was at the rally along with an “undisclosed” number of additional Secret Service agents.

He told the Pennsylvania Times-Leader, “We have yet to find someone to back up the story.” The office actually conducted an investigation and interviewed countless witnesses. “We had people all over and we have yet to find anyone who said they heard it.”

In other words, the only person at that rally in Scranton with thousands of witnesses who claims he heard someone threaten Sen. Obama, Scranton Times-Tribune reporter Singleton, was the only person in a position to make that charge in a newspaper column, something he did with great enthusiasm. His bizarre (and apparently ridiculous) claim was dutifully reported by the Associated Press, ABC, the Washington Monthly, and MSNBC’s Keith Olbermann

And Obama perpetuated the lie during the debate by chastising Gov. Sarah Palin for not doing anything about it!

I don’t know what is going to happen on November 4th. But I think it’s going to boil down to whether or not enough Americans have been fooled by this serial liar.

For the sake of our country, I sure hope not.