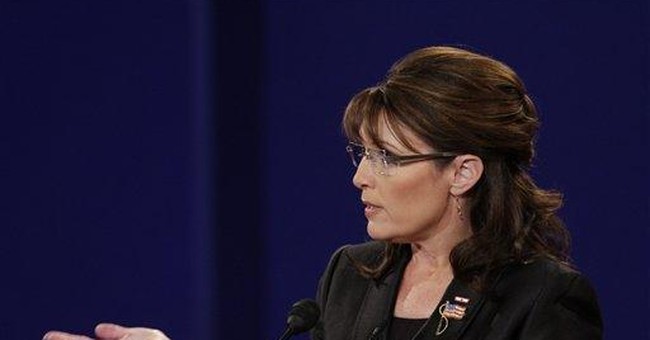 Boy, now that Gov. Palin has finally appeared in the much-hyped vice-presidential debate, I wonder if Kathleen is wishing she could take those words back. The normally reliable conservative writer stunned readers and angered my radio audience when she wrote a scathing column the other day suggesting that Gov. Palin should drop out of the race “for the good of the country.” Parker parroted the mantra of the left by saying that Palin is out of her league and should step aside.

On my radio show today, Parker defended her column. Feisty and a bit combative, she reiterated her belief that Gov. Palin is a lightweight who wasn't “properly vetted” and ought to fade away into the sunset, clearing the way, as she put it, for Mitt Romney to become Sen. McCain's running mate.

I'm still getting angry emails over Kathleen's appearance and expect I will continue to for quite a while.

Kathleen Parker's unexpected tirade took a lot of us by surprise. Then again, it's not the first time a woman has taken an unpredictable turn.

I never have pretended to understand women. Over the course of my marriage, I found myself wondering why my wife seemed to truly feel that yes meant no and no meant yes. I often could simply not figure her out, hard as I tried.

Maybe this bizarre contempt that Kathleen Parker has demonstrated for Sarah Palin is one of those mysterious aspects of being a woman.

In one ten minute phone conversation, Parker went from saying that she “love(d)” Gov. Palin to the mean-spirited line about Palin not being able to string a pair of sentences together. How in the world can someone love someone who is believed to be an imbecile, incapable of even speaking in complete sentences?

Naturally, that doesn't make any sense. Very little of Kathleen Parker's smear of Palin does.

That's why I'm back to thinking it must be a woman thing. And I said so on my radio show. Immediately, female callers from all over the country flooded my phone lines with agreement.

“Some women are catty this way”, said Ellen from Philadelphia. “Especially competitive women. They hate seeing someone like Sarah Palin get elevated ahead of them in any way.”

Kathy from Los Angeles called to say that she worked with a couple of women who behaved like Kathleen Parker did today. “The more accomplished and popular and beautiful the woman in question was, the more the other ladies hated her. They resent other women who are poised, self-confident and clearly comfortable in their own skin.”

A South Carolina caller said that I nailed it. “I have always suspected many women are simply jealous of Sarah Palin”, said Debbie. “It's irrational and unreasonable, but they are envious of this wonderful and inspiring lady.”

Again, I don't presume to understand any of that. Women are mysterious objects and I'm clearly not qualified to figure them out. I sure as heck remain baffled over columnist Kathleen Parker stepping off the curb on this one.

But no one who watched tonight's debate could suggest that Sarah Palin is incapable of smart, intelligent, articulate dialogue. Even in the tough environment of a televised debate with such high stakes, Gov. Palin was charming, charismatic, witty, folksy and captivating.

And you know what no one seems to be acknowledging? Americans realize that Gov. Palin has been getting a crash course on running for national office these past few weeks since she was tapped by John McCain to be his running mate. We don't expect her to sound like an inside-the-beltway politician. We accept that she's new to this.

Despite her wildly popular approval rating as the governor of Alaska, we know that she's brand new to this process.

And we love her.

We love her solid conservative values. We admire her love of God, family and country.

We know that she's tough, fair and passionate.

From the moment she walked onto the stage and shook Joe Biden's hand and was picked up on microphones saying, “Hey, can I call you Joe?” the night belonged to Sarah Palin.

From Iraq to Israel, she was crystal clear on foreign policy. On the war, her scolding of Obama and Biden of wanting to wave the white flag of surrender was spot on.

When she talked about education and the economy, she was running on all cylinders.

Let's face it, for both her critics and fans, tonight's debate was all about Sarah. That's because we know Joe Biden. We've heard him for years. We didn't expect any surprises from the liberal Democrat from Delaware. And we didn't get any.

To those of us pulling for her, Gov. Palin didn't surprise us, either. She's one tough lady.

“The Barracuda” delivered. She was well prepared for her showdown with Sen. Biden.

She was all business, reciting facts, policy and ideology with a smile. She did just fine.

And, Kathleen Parker, she strung complete sentences together all night long. I hope you were watching.