A President for America, Not for Hollywood 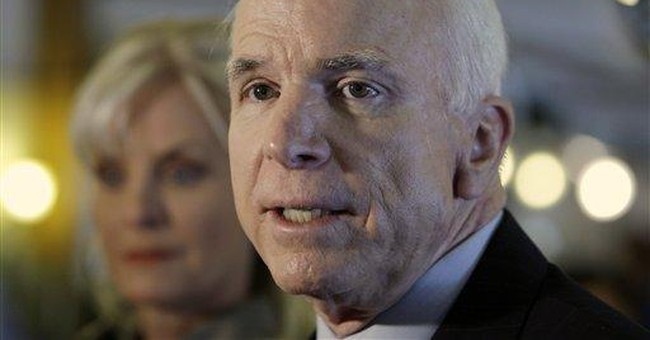 It was fun interviewing Sen. John McCain this week on my radio show.

Sen. McCain isn't someone who strikes you as a particularly dynamic speaker. He doesn't seem to like the formality of giving speeches. He clearly isn't too comfortable reading off a TelePrompter. In other words, this isn't a guy who would be cast as a U.S. President on a TV show.

Barack Obama would fit that description.

Come to think of it, the actor who played a president on the hit TV show "24" resembles Sen. Obama a bit. No, not because they're both black (I can almost hear Al Sharpton's howls of protestation...please leave my private parts alone, Jesse Jackson). But the fictional president possessed some of the same characteristics as Obama: tall, lanky, self-assured, photogenic; a smooth delivery and a warm demeanor.

Yes, Barack Obama could easily be cast as an American president in a movie or TV show.

But this ain't Hollywood. And we're far from the world of pretend and make-believe.

When you get John McCain going about the war against terror, he comes alive. That's when it gets fun. He rattles off the statistics, he showcases his wealth of military experience, and he doesn't recognize the concepts of defeat or surrender.

And when you ask him about the military and foreign policy experience of his opponent, he bristles.

This week, Sen. Obama delivered a foreign policy address that struck Sen. McCain as more than a little odd. "How can Sen. Obama continue to declare that Afghanistan needs to be more of a focal point than Iraq on fighting terrorists when he has never even been there?", McCain asked me.

That strikes me as odd, too.

After all, it doesn't take much for a sitting U.S. Senator to hop on a plane and visit a war zone. Sen. McCain has done it over and over again.

I did some checking, and it turns out McCain was absolutely correct. Sen. Obama has never once traveled to Afghanistan. He has been to Iraq -- once -- about two years ago. Now that he has finally decided to return, get ready for a news media that will act as if Jesus Christ has returned and will be raising people from the dead or multiplying the loaves and fishes.

Wouldn't one think that getting a military tour of the battleground with one-on-one briefings from the commanders whose troops have their boots on the ground in either Afghanistan OR Iraq would be beneficial?

No, not if your entire presidential campaign is already grounded in the belief that we need to tuck tail and retreat from Iraq like a bunch of whipped puppies. Sen. Obama doesn't want a few little pesky facts, like the ongoing success of the Iraq surge, to get in the way of a good old fashioned act of waving a white flag of surrender.

During his foreign policy address this week, he managed to snatch defeat out of the jaws of victory over the surge issue, too. While everyone of all political stripes are admitting that the surge is working and dramatically reducing the level of bloodshed in Iraq, Obama managed to complain that the Iraqis aren't spending as much in rebuilding their own country as a result of the surge.

It's a funny thing, the old school media's infatuation with Obama. Sometimes it's obvious, like Chris Matthews admitting to the thrill up his leg when the anointed one speaks; other times, it's fairly subtle.

This week, the New York Times breathlessly revealed the results of a survey that suggested that 80% of black Americans have a favorable impression of Obama compared with 30% of whites.

The clear insinuation in the article is that white America is so bigoted that it couldn't possibly vote for a black man. Remember how West Virginia was pummeled in the press during the primary election there?

And yet, there is certainly another racial reality at play here. Isn't it possible -- even likely -- that many black Americans are supporting Sen. Obama simply because he is black?

If a white voter (re: West Virginia) admitted to voting for a candidate simply because of the color of his skin, we routinely label that person as a racist.

So why does the black voter who is doing the exact same thing get a pass?

I often ask black callers to my show questions about Sen. Obama's policy positions, especially those who describe themselves as Republicans or conservatives. Their lack of knowledge is astounding. Abortion, taxes, health care, it doesn't matter, they don't really know much about him at all.

Ask them what that means, and sadly, they don't really know. There's nothing new about the failed, radical, liberal beliefs of the former community activist from Chicago. But try telling that to a black man or woman hellbent on voting for him.

The New York Times is right, there is still a political racial divide in this country. But as usual, the Times doesn't know who to blame.

If there are whites who won't vote for a black man simply because he's a black man, shame on them.

But if there are blacks who won't vote for a white man because he's not a black man, that's equally shameful. And every bit as bigoted as bigoted can be.

At the end of my interview with Sen. McCain, I told him how feisty he sounded, how fired up he seemed to be. He laughed.

That's what he's going to have to do in order to win the White House in November. The stakes are high and the deck is stacked against him.

But if he continues to remind the American people about the radical differences between a man who has fought in a war and another who simply reminds us of an actor who plays a president on television, John McCain will win.