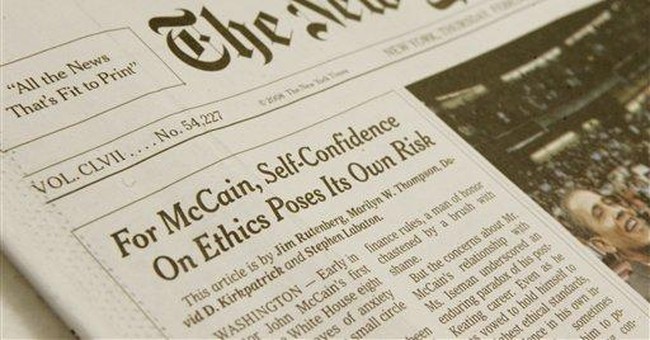 I have two sources, both of whom wish to remain anonymous, that report to me that New York Times Editor Bill Keller was spotted in a dumpster last weekend in the Hamptons snorting crack cocaine and smothering a pair of cocker spaniel puppies with a pair of sweat socks.

So now I’m reporting it to you.

Of course this isn’t true – not that I know of, anyway – but it sure was easy to get out my laptop and write those words down so thousands of eyes could read them.

Evidently, the “Old Grey Lady” possesses the same standards as a supermarket tabloid that breathlessly reports that “sources” claim they saw Elvis munching on a Krispy Kreme donut in Myrtle Beach.

Watching Sen. John McCain solemnly deny the ridiculous front page story in the Times – a story that basically claims that two “former campaign workers” who “wish to remain anonymous” were concerned, nearly a decade ago, that a friendship the senator had with a female lobbyist might have had the appearance of impropriety, even though there was not one shred of evidence to suggest that was the case – was positively sickening.

For a guy who is said to have a mighty temper, Sen. McCain sure stayed pretty calm during the press conference during which he unequivocally refuted and denied the allegation. If ever there was a time to show the world some anger, perhaps this was it.

But none of us are running for president. I suppose he has to thwart the claims by his critics that he’s some kind of hothead who is prone to irrational outbursts and he went into that media event today having to be mindful of staying calm, cool, and collected.

Too bad. It would have been satisfying to watch him pound his fist on the podium a few times and call out the jackals from the New York Times.

This is the inevitability of “gotcha” journalism. It seems like every other reporter; from the smallest TV station in the country to the biggest periodical in the world believes that trying to destroy a public figure’s reputation is a worthwhile effort.

And if the “journalist” can’t get the sordid allegation on the record, there’s a very easy fix: quote anonymous sources.

Let’s face it: as the great Wilford Brimley character in the movie Absence of Malice says in the climactic scene: we hope that reporters do the right thing, but if they don’t, there’s not really a lot we can do about it.

And if the person getting slimed is a Republican running for the highest office in the land, he has to face the onslaught brought on by the anonymous story.

I can only hope that most Americans from all political stripes will be able to see right through this episode. When the Times peered down from its lofty liberal tower a couple of weeks ago and officially endorsed McCain as the GOP nominee, many of us knew right then that there was going to be big trouble ahead.

I just didn’t think it would happen so quickly.

The fact that it was well known that the newspaper was investigating this non-story about sleazy, baseless allegations for months prior to their “endorsement” of McCain should, on the merits, make their nod towards Sen. McCain utterly meaningless and completely disingenuous.

All the New York Times was doing was falsely propping Sen. McCain up in order to tear him down a few weeks later.

But just like Hillary Clinton’s tears handed her New Hampshire, so should this ugly media attack benefit Sen. McCain. This will be remembered as the cheap shot of the 2008 campaign. And decent people don’t like seeing people brutalized by cheap shots.

Those of us with radio shows or newspaper columns have been fed a rumor about Sen. Barack Obama for months now. It’s a graphically vivid rumor, a tale of degradation and illegality that would make just about anyone with an ounce of decency cringe.

If true, it certainly is a tale that would doom any political candidate’s chances.

But no broadcaster or newspaper columnist with a shred of common decency would ever publicize that rumor. We know that it would be shameful to try and smear Obama with whispered innuendos and sleazy stories that we couldn’t corroborate, despite the intensity with which some of us disagree with Sen. Obama.

In other words, we wouldn’t dare go where the New York Times went with Sen. John McCain this week.

No, the Times is in a league all its own. And it’s not a league that anyone could be proud of.

DeSantis Is History’s Greatest Monster For Some Reason
Townhall
David French SO upset over tweet from The Blaze's Todd Erzen he called to TATTLE ... it did NOT go well
Twitchy
Ron DeSantis Schools CNN Reporter Pushing Misleading Hurricane Narrative
Redstate
The Morning Briefing: Biden's Last Brain Cell May Be the Death of the Republic
PJ Media