Mike Fuljenz
|
Posted: Dec 20, 2017 12:01 AM
Share   Tweet
The opinions expressed by columnists are their own and do not necessarily represent the views of Townhall.com. 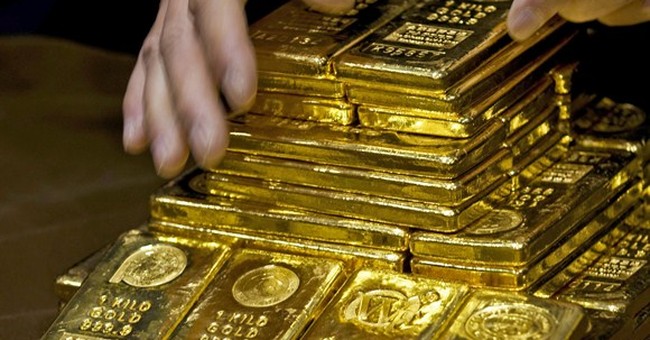 A year ago, in their December 26, 2016 issue – their last issue for 2016 – the Barron’s Commodities column carried the headline, “The End of a Gold Era.” They quoted leading Wall Street banks like Bank of America, which said that Fed rate hikes will be “a key headwind to gold.” The London Bullion Market Association, however, was more bullish than usual in their 2017 predictions. The summary statement of the LBMA survey said: “2017 will certainly be an eventful and unpredictable year given the high degree of geopolitical uncertainty, with a more nationalistic U.S. President in residence and the indications that the UK will pursue a hard Brexit in its negotiations with the EU.” In addition, they said there is “the prospect of further uncertainty with elections to be held later in 2017 in both France and Germany, as well as the potential for tensions between the U.S. and China. Analysts are predicting that the gold price will trade in an average range of $1,101 to $1,379. Greater uncertainty should prove positive for gold, as could higher inflation if the new U.S. administration adopts reflationary policies.”

That range of prices was pretty accurate as the low for gold in 2017 came on the first day of the year at $1,150 and the high for the year came on September 8, 2017 at $1,346. Given the fundamentals cited in that paragraph, most pundits predicted a strong dollar due to several key elections in Europe – in the Netherlands, France and Germany. If those elections went the way of “Brexit,” then the anti-European Union (EU) forces could have ended the euro currency. Instead, pro-EU forces won, and the dollar fell almost 10% to the euro in 2017. As it turns out, the dollar’s strongest day was the first trading day of the year, when the U.S. Dollar Index stood at 103.2. As of last Friday, the dollar index was 93.9, down 9%.

I’m happy to report that my friend Gary Alexander won a highly-publicized bet with his fellow market columnist Ivan Martchev (posted on Marketwatch and several other Websites), in which Ivan predicted that gold would fall below $1,000 in 2017. Gary bet him $1,000 that it wouldn’t. Ivan accepted the bet in public, and I backed up Gary here in my Metals Report, saying “my money is on Gary,” who was editor of Gold Newsletter in the 1980s, when Gary and I worked together. Now, Gary tells me that Ivan has admitted defeat for 2017 but he has renewed the same bet for 2018. Well, my money is on Gary again!

Gold hit its lowest level since last July on Wednesday, December 13, the day the Federal Reserve’s Open Market Committee raised short-term interest rates 0.25% to 1.25%. The London pm gold fixing the day before, December 12, was $1240.90. As soon as the rate increase was announced, gold began rising. By Friday, gold had risen $15 to $1,256. This fits the pattern of the last two years, when gold hit its late-year low price on the very day (or day after) the Federal Reserve raised short-term interest rates. In this case, the old adage of “sell on the rumor, buy on the fact” means that gold traders would sell gold in advance of the Fed’s interest rate decision and then buy as soon as the decision was announced. Strange!

Some years, gold beats the stock market and some years (like this year), it apparently doesn’t, but gold is not designed to beat every other investment every year. It is “designed” (if that is the right word) to be REAL MONEY. It is designed to beat the dollar, the yen, the euro and every other paper money in real value, in purchasing power, over the long term. And that is what gold is doing, and has always done.

The Consumer Price Index (CPI) has been calculated since 1913, the same year the Federal Reserve was born. In the last 104 years, gold is up more than 60-fold, which means that today’s dollar is worth less than 2-cents was worth in 1913. In the same 104 years, the Consumer Price Index has risen from 10 to 242, which means the 1913 dollar could buy what $24 buys today. In the following table, you can see the gold price vs. the CPI at specific intervals over the last century and you can see that gold wins every time.

Gold has 5,000 years of history as the ultimate safe haven. Although Bitcoin has soared in the last three months, let’s wait and see if it can beat paper currencies over the next decade, much less 5,000 years….

The Internet is a wonderful tool, but it is also a dangerous place, too, at times. Criminals take advantage of our kind nature, particularly at this time of year. One of the most popular forms of Internet search is the “puppy picture or video,” so criminals make take advantage of our warm hearts by trying to sell us cute little puppies online. Well, the Better Business Bureau (BBB) warn us in a report to beware of such scams. Thousands of consumers have fallen victim to fake pet ads originating from…you guessed it: Nigeria.

I’m tempted to say that nothing good comes out of Nigeria, but I know they have a great soccer team! I’m just kidding, of course, but the most famous “phishing” scam is when some supposedly high-level diplomat from Nigeria has $10 million in gold bars (or is it $10 billion?) that he wants to transfer to America and he has heard that you – of all people! – are a trustworthy person, so if you will just send him $10,000 for the necessary paperwork, a good portion of that $10 million will be yours. Yes, some people I know fall for this.

In the numismatic field, some people still fall for counterfeit coins, gold-plated tungsten bars posing as gold bullion and other scams. That’s why it’s important to deal with nationally-known coin dealers with multiple industry awards. Over the years, I have taught many counterfeit detection and rare coin authentication seminars for collectors, dealers and law enforcement officers. This year, I am particularly proud to have won the Al Kreuzer Memorial Award for outstanding contributions in the efforts to combat counterfeit coins and currency from The Industry Council for Tangible Assets.

Merry Christmas with a “Music Lesson” from Morgan Freeman

I sent you this link last year, but it bears repeating. It comes from actor Morgan Freeman, and it concerns a special music lesson his mother gave him. When he refused to study his piano exercises as requested, she just asked him to play a scale in a certain way – a way he refused to play until after she died. When he finally got around to following her instructions, he found the secret blessing in his mother’s lesson.
Check out the video: https://www.ignitermedia.com/products/2667-the-christmas-scale

Merry Christmas to all.