Mike Fuljenz
|
Posted: Feb 10, 2016 12:01 AM
Share   Tweet
The opinions expressed by columnists are their own and do not necessarily represent the views of Townhall.com. 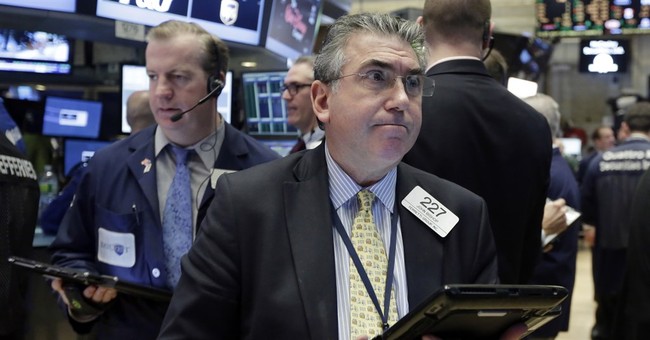 Gold is up over 12% in the first five weeks of 2016, while stocks are down 9% in the same time, giving gold a 21% advantage over stocks. Gold opened on Monday morning (February 8) by touching its $1200 price from the start of 2015, thereby making up for all the losses from last year. The dollar is not the major cause, since the dollar index is down only about 2% this year, so gold is rising in terms of all major currencies. In addition, gold and silver are doing far better than most other commodities, especially oil, so this appears to be a pure “fear” play in gold – a safe oasis from the decline in stocks. With interest-rate yields from banks and bonds falling to near zero, gold is the safest “sidelines” play in a dangerous world.

Money is Moving OUT of Stocks and INTO Gold

Here is a comparison of asset classes as of last Friday, according to the weekend Wall Street Journal:

There is a direct correlation between the decline of stocks and the rise of gold. Stock-based exchange-traded funds (ETFs) sold a net $16 billion in stock shares in January, while precious metals ETFs added $1.2 billion in the same month. Roughly speaking, that means about 7.5% of stock ETF sales went into gold ETFs in January. This trend accelerated in the first days of February. For the week ending February 4, 2016, an additional $888.7 million moved into the SPDR Gold Shares (GLD), the biggest gold ETF.

This trend is important since gold ETFs have often been the “tail that wags the dog” in the gold market since the introduction of gold ETFs in 2004. Since the gold ETF speculators often trade rapidly and on margin, their action magnifies any gold market moves, up or down. During gold’s strongest years, there was massive net buying for gold ETFs, but in April 2013, the gold ETF market turned on a dime and there has been net gold ETF selling over the last three years:

If we keep seeing net gold ETF buying in 2016, we could see a reversal in the price of gold this year. That’s important because a gold bull market breeds more gold bullion coin buyers, who will later move up to numismatic coins. This is a time for buying gold coins, not selling them. In addition, historic times of a declining stock market are often the best times to accumulate rare coins. In the 1970s and 1980s, the three worst stock markets generated the three strongest surges in gold and even larger increases in rare coins, as measured by the PCGS 3000 Index.

With both physical and paper gold demand rising in early 2016, we could see a new bull market in gold.