Mike Fuljenz
|
Posted: Jan 06, 2016 2:48 PM
Share   Tweet
The opinions expressed by columnists are their own and do not necessarily represent the views of Townhall.com. 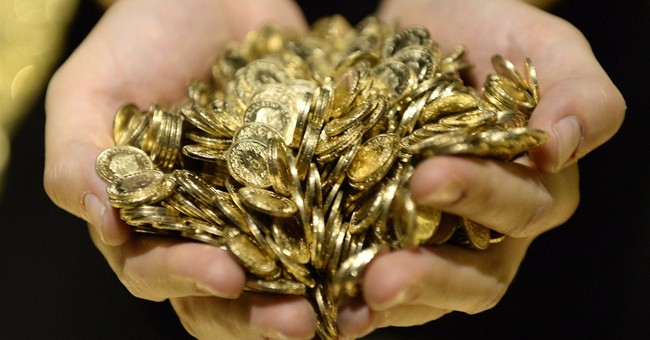 Gold opened 2016 with a $20 rise on Monday morning. The London pm gold price fix was $1082.25, up $20 from their last London setting of 2015, at $1062.25. In New York, gold reached $1084 before retreating and then staging another rally. At the same time, the Dow Jones Industrial Average was falling over 400 points on Monday’s opening, ostensibly over fears about China and the Middle East, but also hurt by the slow growth of the U.S. economy, combined with a recent interest rate increase by the Fed.

Gold Rose (in Terms of MANY Major Currencies) in 2015

The U.S. dollar rose in terms of every other major currency during 2015. Besides the few currencies that are roughly tied (“pegged”) to the dollar, the 42 other currencies listed in the year-end Wall Street Journal fell to the dollar in 2015. The weakest currency was the Kazakhstan tenge, against which the U.S. dollar gained 85.2% in 2015. Among the 15 most important currencies, gold gained ground in eight and fell in the other seven, but gold performed better in every other major currency during 2015 than in the dollar:

The Tooth Fairy is Evidence of Inflation

Those of us over 60 remember getting a silver quarter or a few silver dimes under our pillow for each loose tooth that finally fell out. The U.S. stopped minting silver dimes and quarters 50 years ago, but those “junk” silver coins sometimes sell for 12 times face value, so a quarter from 1964 is worth about $3 today. Sure enough, Visa’s annual “Tooth Fairy” index found the average “fairy dust” per tooth last year was $3.19, very close to the real worth of that silver quarter or three dimes under our pillow in 1960. Visa also reported that each child stands to earn $64 from their early “career” of losing their loose teeth.

To get this figure, Visa interviewed over 4,000 American parents via telephone polls last May and June. Visa has been taking this annual poll since 2009. Ironically, the tooth fairy is feeling the pinch of our slowing economy. Last year’s $3.19 average is down from $3.40 in 2014. The Pillow Payoff has fallen two years in a row now. “The Tooth Fairy is finally fluttering back to earth,” quipped Nat Sillin, Visa’s director of global education. However, some parents are still generous. Here’s the range of rewards:

Fathers gave more ($3.63) than mothers ($2.87), a consistent trend in all seven years of the poll. As the years go on, perhaps this Tooth Fairy poll will be a microcosm of the economy – in good times, parents give more, in bad times they cut back – but I view it primarily as an indication of inflation since 1960.

The Tooth Fairy (notice the definitive article, “The” in capitals, like “The Ohio State University”) is The hardest-working imaginary gift-giver in the fairy-sphere. Santa Claus may ring a bell on a street corner for a few days in December and he works very hard one night, but The Tooth Fairy works every night of the year. An army of Easter Bunnies may lay a lot of eggs one Spring Sunday morning, but The Tooth Fairy delights thousands of children every morning of the year, 365 dawns (366 this year), rain or shine.

At least two billionaire gold investors are still bullish on gold and may be buying more at bargain prices:

John Paulson is the largest shareholder in the largest gold exchange traded fund, the SPDR Gold Trust (symbol: GLD). His company owns about 9.1 million shares of GLD, worth roughly $940 million. According to the latest quarterly filings, released November 14, his fund didn’t buy any more gold in the third quarter, but in that quarter Paulson said gold was “fairly valued.” Since gold has gone down in price since then, he may have bought more gold last quarter, but we won’t know until the February 14 filings.

Stanley Druckenmiller, formerly chief portfolio strategist George Soros (who has also bought a lot of gold in his lifetime), is one of the top 10 holders of GLD. He retired from money management in 2010, but he currently manages his family’s fortune through the Duquesne Family Office umbrella. According to the latest quarterly filings, his family fund owns 2.9 million shares of GLD, the equivalent of 290,000 Troy ounces of gold, currently worth about $300 million, roughly 7.5% of his family’s $4 billion fortune.