Mike Adams
|
Posted: May 04, 2018 12:01 AM
Share   Tweet
The opinions expressed by columnists are their own and do not necessarily represent the views of Townhall.com. 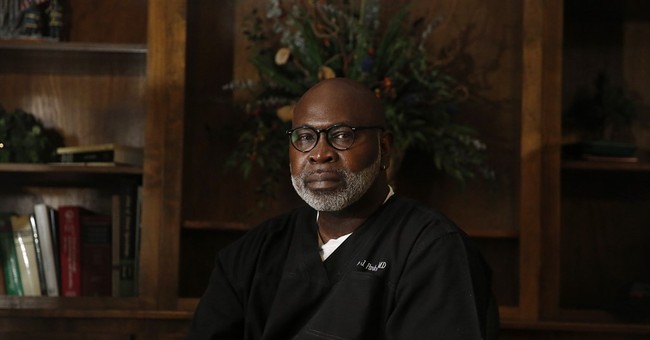 There is an obvious similarity between those who wish to keep abortion legal and those who wanted to keep slavery legal. Just as it is necessary to dehumanize the unborn in order to preserve abortion rights, it was once necessary to dehumanize the slave in order to preserve slaveholder rights. Unsurprisingly, professional abortionist Willie Parker takes a different view. He thinks it is the pro-life position, rather than the pro-choice position that has close ties to slavery. He explains it this way:

“It is impossible not to think constantly about the analogy of the limits on women’s reproductive rights to slavery. As an African American man descended from slaves and raised in the South, it is too easy for me to imagine what it’s like to have no control over your body, your destiny, your life. Less than two hundred years ago, white men owned black people’s bodies … I believe that the men who are passing the laws that limit medication abortion want to control women’s bodies, which is not so far from wanting to own them outright.” P. 107-108 from Life’s Work: A Moral Argument For Choice.

In a nutshell, Willie Parker believes that any effort to restrict abortion is extreme. Any such efforts are morally indistinguishable from kidnapping women, falsely imprisoning them, and then forcing them into a lifetime of involuntary servitude. But he sees nothing extreme in his own insistence that women can treat their own unborn children as chattels – aborting them for mere convenience even during the latest stages of pregnancy. And he does not mask his view that such decisions are moral goods. He actually characterizes himself as pro-abortion, not merely pro-choice.

That characterization helps explain why Willie Parker calls George Tiller “one of the abortion movement’s bravest practitioners” and “St. George.” He recalls meeting Tiller before he was gunned down in a church in Kansas:

“His work and his bravery were legendary and I was awestruck. He was one of three doctors in the country who continued to perform third-trimester abortions despite the vitriolic political outcry against the procedure …” P. 114 from Life’s Work: A Moral Argument For Choice.

Calling Tiller a “guru,” a “teacher,” and a “saint,” Parker expresses shock that such a “mild person could be the object of so much fury.” Parker’s admiration for Tiller is so great that a letter from Tiller hangs in Parker’s office saying, “Abortion is a matter of the heart. For until one understands the heart of a woman, nothing else about abortion makes sense at all. George Tiller.” Parker described receiving news of Tiller’s death this way:

“My mood sank from exuberant to desolate – an emotional pivot I had not felt since twenty years earlier, upon receiving the news of the death of my mother … I felt a hardening of my resolve … I have heard fanaticism defined as a doubling down of effort behind a misbegotten aim. If that is true, then conscientious resolve is fanaticism’s antidote: a doubling down of effort behind a clear aim, despite the risk.” P. 116 from Life’s Work: A Moral Argument For Choice.

This is the point in Parker’s 217-page book where the need for grounding in some sort of moral reference point becomes obvious. Parker seems to be saying that pursuing a misbegotten aim is fanaticism, which is a problem. But what does he mean by the use of the term misbegotten? Common synonyms are contemptible, despicable, wretched, miserable, confounded, damned, and accursed. But none of those words mean anything unless they are grounded in some external moral standard.

Although he claims to be a Christian, Parker cannot use the Bible to explain what is objectively wrong or “misbegotten.” He says in his book that, “There is no ‘right’ interpretation of Scripture.” He also states that, “I don’t believe in moral absolutes.”

Hence, it is even more difficult to explain this passage from his book:

“The anti-abortion movement was launched and promulgated largely by whites, triggering in me a nausea and a primal loathing that I believe is the reasonable response of someone who grew up among folks who carried with them in their bodies memories of lynching and the terrorism of the Ku Klux Klan.” P. 123 from Life’s Work: A Moral Argument For Choice.

This is more than slightly disturbing. Parker admits to hating a movement simply because it was launched by whites. His attempt to link any movement “promulgated largely by whites” with the Klan is more than just intellectually lazy. It is deeply bigoted. But he has an even bigger problem when it comes to grounding his moral repulsion.

People intuitively understand the inevitability of moral absolutes. When shown a picture of piles of dead Jews in Auschwitz, people are naturally repulsed. No one has to explain it to them. They intuitively understand that killing innocent human beings is wrong. And they know that is exactly what happened in Auschwitz. So they rightly conclude that the people running Auschwitz were wrong. They had a misbegotten aim. And the people who liberated Auschwitz were delivering fanaticism’s antidote.

So who is to say that the KKK had a misbegotten aim, while those who fought them were providing fanaticism’s antidote? Not Willie Parker. The only moral compass he has points back to him. That explains why he is constantly lost in a fog of moral confusion.

That also explains how he has managed to abort thousands of black babies without experiencing any symptoms of nausea, much less primal loathing.