Cowards in the Academic Trenches

Mike Adams
|
Posted: Nov 17, 2017 12:01 AM
Share   Tweet
The opinions expressed by columnists are their own and do not necessarily represent the views of Townhall.com. 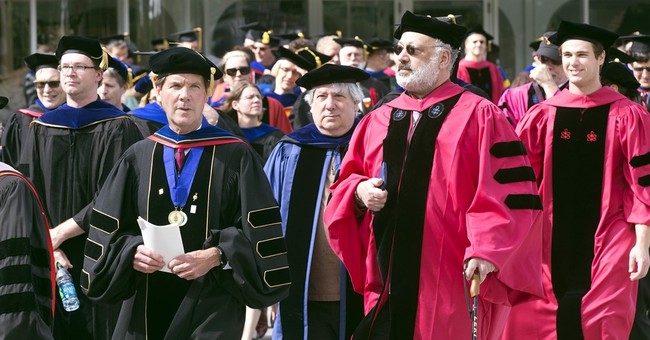 The problem with my leftist colleagues really isn’t their politics. It is their lack of courage. And it is getting worse. Granted, I have long heard reports of professors abusing students in the classroom. But those reports have drastically increased since the election of 2016. I would like to provide just a few examples before commenting on the effects such cowardly abuse are having on students and on the general campus climate:

*A professor was giving a pro Black Lives Matter lecture. A student countered the professor by making the rather obvious observation that “all lives matter.” Upon hearing it, the professor denounced his student as a racist three times in front of the entire class. Each time she tried to explain herself, the professor shouted “racist!”

*On the first day of class, a professor circulated her syllabus with a clause telling students they were banned from making “disrespectful” remarks during class discussion. Over the course of the next three and a half months, the professor repeatedly claimed that all white police officers are racists and that simply aspiring to be a police officer is evidence of racism. Students were prevented from rebutting the professor by the selectively enforced ban on “disrespectful speech.” She equated denial of racism with racism, which she classified as inherently disrespectful.

*A professor told his freshman students that anyone who voted for Trump is both a racist and a fascist. A teenaged student raised her hand to offer her non-racist and non-fascist reasons for supporting Trump, albeit reluctantly. The professor shook his fist at her and shouted, “shut up!” repeatedly until the student finally gave up.

*A professor hurled profanities about Trump and Pence in a classroom tirade. When a student countered that Pence is a “good man” he was told that he was mentally ill and needed to go to the counseling center to get “professional help” before returning to class. The accusation that the student suffered from mental illness was repeated in front of dozens of students.

It is unsurprising that students learn from their professors. Generally speaking, that is what they are there to do. So it comes as no surprise that the increase in uncivil classroom conduct by professors is being accompanied by an increase in uncivil conduct by students across our campus. Several members of the College Republicans (CR) group recently found that out when they decided to host a speech about free speech by the author of this column. Some of the more troubling incidents surrounding the event include the following:

*An Iraq War veteran and current UNCW student was posting club flyers for weeks when he noticed they were being torn down. After he went to replace them he started to monitor the bulletin board. In the process, he caught a feminist student in the act of tearing down his flyers. When confronted, she peppered him with an f-bomb-laced tirade. A few professors approached upon hearing all the commotion. They simply stood by and listened while the feminist verbally abused the veteran.

*After the female president of the CRs hung flyers advertising the free speech event they were torn down. She stapled the next bunch of flyers and left a note promising to hang two for every one torn down. A male student left a note calling the female student and her friends “c*nts.” Campus feminists were so outraged they marched on Washington, D.C. Just kidding. They didn’t care.

Days before the speech, the same student defaced more flyers. This time, instead of directing the c-word toward the women he attacked the speaker with defamatory statements. Specifically, he claimed the speaker was sued for divorce after his wife discovered he liked bestiality. The self-professed communist and Antifa supporter was reported to the administration for stealing and defacing flyers. Unlike communism itself, his fate is yet to be determined.

*Finally, the speech day arrived. After the speech itself, no leftists tried to ask questions during the Q&A session. This is despite the fact that the humble and awesome speaker assured those in attendance that the First Amendment equally protects both respectful and disrespectful questions.

The day after the speech, the students who waived their free speech rights in the Q&A started putting up signs on campus referring to the speaker as a “c*ck.” The ringleader previously interned for the Democratic Party. I know you’re shocked.

Readers should immediately discern the obvious parallel between the antics of these cowardly professors and their unhinged student followers. The professors shut down dialogue in the classroom and repeatedly insult students who disagree with them. Similarly, leftist students forego invitations to engage in dialogue with conservatives. Lacking the power to control their fellow students, they refrain from face-to-face attacks and instead attack their fellow students anonymously. This tactic is employed unless, of course, they are actually caught in the act of tearing down their opponents’ speech and must therefore resort to in-your-face hysteria.

My Marxist colleagues are not true revolutionaries. They are cowards in a civil war of their own creation. And they are poisoning the academic climate with their toxic and highly contagious intellectual cowardice. Each one of them should be dishonorably discharged for the crime of academic malpractice.