First Thing We Do Let’s Kill All the Handicapped

Mike Adams
|
Posted: Jun 02, 2016 12:01 AM
Share   Tweet
The opinions expressed by columnists are their own and do not necessarily represent the views of Townhall.com. 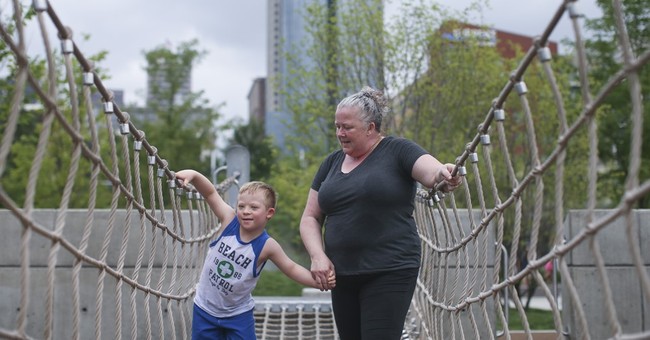 The so-called handicap justification for abortion suffers from the same flaw as nearly every other argument for abortion. It simply assumes that the unborn child is not human. If you don’t believe me then try a little experiment the next time you hear someone try to use this justification. Simply say, “I agree. The best way to eliminate handicaps is to kill all children with handicaps.”

The response will be swift and emphatic. It always is. The person arguing that detecting a handicap during pregnancy can justify abortion will inevitably offer the same point of clarification: “No, I’m not saying that we should kill handicapped children. I’m saying we should abort them before they become handicapped children.” When they offer such a “clarification” you’ve caught them begging the question on the central issue in the abortion debate, which is simply, “What is the unborn?”

Ultrasound technology may seem like a friend to proponents of the so-called handicap justification for abortion. But it is not. We are usually unable to detect handicaps such as Down syndrome and cerebral palsy (CP) until the second trimester of pregnancy. This is long after we are able to detect with certainty the sound of a baby’s heartbeat. This is problematic for the pro-choice science-denying fundamentalists.

Even those who refuse to accept the clear scientific consensus that life begins at conception – and we’ve only known this since the Civil War - must recognize the significance of the heartbeat. It means that we are dealing with a living being that is actively participating in the process of developing itself from within. It is undeniable proof that the entity in the womb is living long before any handicap is detected, much less confirmed.

But those who are forced to admit that the unborn handicapped child is human still have to deal with the question of what makes humans valuable. Persuading them that the handicapped child is of equal value is not easy in our culture. After all, we live in a country where major political candidates are no longer disqualified from office for openly mocking the handicapped. In our country, the pursuit of pathological narcissistic self-interest often Trumps any modicum of common decency.

Put simply, the debate over the handicap justification for abortion forces us to confront squarely the question of whether human value is determined by a) what we are (our basic human nature), or b) what we can do (our basic human functions).

Indeed, the implications of applying functionalist justifications for aborting children with Down syndrome are simply too dangerous to ignore. Consider the following:

*Down syndrome children are more impulsive than the average person. But the same can be said for gamblers, debtors, alcoholics, drugs addicts, and most criminals. Is this a justification for killing them, too?

*Down syndrome children are slow learners. If this justifies killing them then would we also be justified in killing all children with learning disabilities?

*Down syndrome children often have delayed language and speech development. If this justifies killing then may we also execute the mute?

Similarly, the implications of applying functionalist justifications to aborting children with CP are also too dangerous to ignore. Consider the following:

*The primary effect of CP is impairment of muscle tone, motor functions, balance, control, coordination, reflexes, and posture. Would we also be justified in killing those without CP who happen to display similar characteristics – such as being uncoordinated, out of shape, or just displaying bad posture?

*People with CP also exhibit oral motor dysfunction, such as swallowing and feeding difficulties, speech impairment, and poor facial muscle tone. Can we also kill people with lisps? How about those who are in dire need of facelifts although they don’t actually have CP?

Somehow some people do remain so calloused as to deny that the handicapped are equally as valuable as the rest of us - despite the fact that they share our basic human nature. However, they must surely be troubled by the error rate in detected handicaps during pregnancy. How would those calloused individuals respond to the following? ...

*A beautiful young woman came walking up to me with tears in her eyes after I gave a speech on the topic of this column. She was diagnosed with Down syndrome when she was in her mother’s womb. Her mom wanted to have her. Her dad wanted her aborted. Mom won that argument and now her dad has to live with the fact that his daughter knows he wanted his perfectly healthy daughter to be killed.

*A teenaged black man walked up to me after another speech I gave on the topic of this column. He was tall, athletic, handsome, and confident. He shared with me the story of how two medical doctors told his mother he had CP and therefore should be aborted. The third doctor she visited happened to be a Christian. That third said the other doctors were wrong and that the abortion should not take place. The mother believed him and months later she bore the perfectly healthy son.

Progressive advocates of abortion would never tolerate such errors among advocates of capital punishment. Of course, the question is not whether the pro-choicer is a consistent human being. It is simply whether the handicapped are valuable human beings. In other words, are they among those neighbors Jesus talked about in the parable of the Good Samaritan?

As a society, we will be judged by whether we lift them up or simply pass them by.