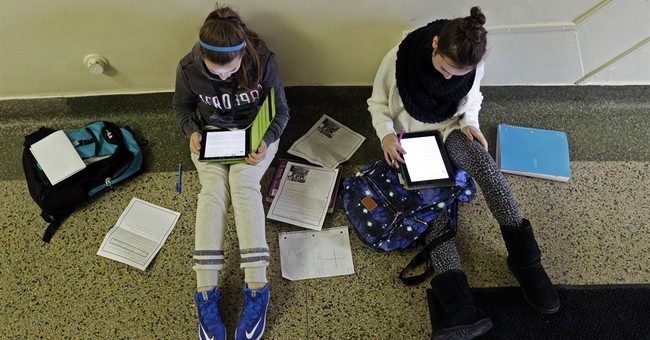 Author’s Note: If you’re wondering why this column begins with “#6” just go to my archive. This is Part III of a series. Parts I and II described a new College Prep Course that is being offered by www.CrossExamined.org. Frank Turek, J. Warner Wallace, and I will be traveling the country offering the course starting in the summer of 2015. This column series provides an overview of my ten-step plan to help Christian kids prepare for life in college.

6. Getting Into the Driver’s Seat in Class. I appreciate the folks who made the movie God’s Not Dead. But the movie contained three serious flaws. You need to know them before you enroll in college:

First of all, you aren’t going to hear a professor formally ask you to renounce your faith and threaten to punish you with extra work if you refuse to do so. It would be better if that were the reality. You would just call the Alliance Defending Freedom, sue, and prevail in a court of law. It isn’t that easy because atheist professors aren’t that stupid.

Second of all, you aren’t wise to take the bait when the professor demands that you defend your Christianity in front of your peers. It’s a losing proposition because he has heard all your arguments before. So, if the professor tries to place the burden of proof on you, all you have to do is remind him that he’s being paid a salary to teach a class and that salary is coming from the tuition you are paying. Do not take the bait. Let him teach while you prepare questions for cross-examination.

Finally, you are not going to convert the entire class to Christianity in the course of the semester. That mass conversion scene in the movie was not realistic. But you will be able to plant a few stones in the shoes of fellow students if you ask the right questions. Because you have already read and re-read Tactics by Greg Koukl (before you enrolled!), you will be able to ask tough questions that undermine the ability of the professor to indoctrinate other students.

For example, imagine your professor goes on a rant about how assault weapons need to be banned in order to reduce violent crime. You could respond (using Koukl’s Colombo tactic) with something like the following:

What do you mean when you use the term “assault rifle”? (Hint: There is a 99 percent chance the professor will not be able to answer the question).

How did you arrive at the conclusion that these weapons should be banned? In other words, where is the data showing that they cause an increase in violent crime? (Another hint: The professor might not have any data but he might point out that the violent crime rate did go down during the ten-year period of the previous assault weapons ban. If so, you’ve got him trapped).

Professor, have you ever considered the fact that the violent crime rate also went down in the decade following the lifting of the ban on these so-called assault weapons? How does that affect your claim that they should be banned?

As you can see, using the three-question Colombo tactic requires a little work. But even isolated questions can be effective in the classroom. When your Marxist professor lectures on topics like socialism and cultural relativism, just take good notes and try to think of questions that expose flaws in his worldview. For example,

Professor, you said we should not judge other cultures by the standards of our own culture. Does that include Nazi Germany?

Professor, isn’t putting Jews in ovens wrong regardless of the geographical location and time period of the people doing it? In other words, isn’t there such thing as a universal moral code?

Professor, you said God was evil because he allowed innocent children to be killed. Does that also apply to those who think abortion should be legal?

Again, with questions like these you might not win over the hardened heart of your professor. But you will give your classmates something to think about. You’ll be planting stones in their shoes.

7. Worldview Training, Part II. After spending a year in the belly of the beast, most students will need to regroup and assess what just hit them. I would recommend making a second trip to Summit Ministries (see www.Summit.org) during the summer after one’s freshman year. It’s a lot of material to absorb in just two weeks. At Summit, regular speakers include Josh McDowell, Sean McDowell, Nabeel Qureshi, Mike Haley, Scott Klusendorf, and, of course, Jeff Myers and John Stonestreet. There’s no way you can absorb all these guys have to say in just one two week session.

8. Student Groups and Free Association. Christian student groups are often told that they cannot limit their membership to those subscribing to traditional Christian beliefs - or that they cannot require their officers to hold such beliefs. In response, I’ll address three indispensable questions in my prep course lectures:

What did NAACP v. Alabama (1958) say about freedom of association?

How was freedom of association (in the context of student groups) limited by CLS v. Martinez (2010)?

How can state religious freedom statutes be used to keep public universities from exercising the limited authority granted to them by the CLS decision?

In my next installment, we’ll talk about getting your group funded and battling campus speech codes.