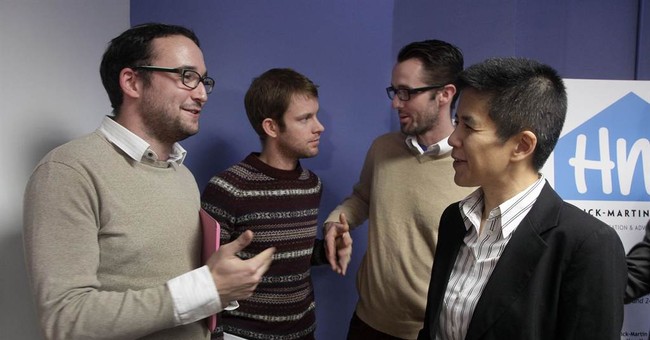 Author's Note: By way of disclosure, I am currently being represented by the Alliance Defending Freedom, or ADF, in the appellate stages of a First Amendment lawsuit.

When I was a graduate student, I had great admiration for the Southern Poverty Law Center. In 1989, I took a graduate seminar in race relations and learned all about how the SPLC helped shut down the KKK in the South - thus expediting the end of the practice of lynching. Because of their hard work, the targeted murder of blacks is currently confined to abortion clinics funded by leftist organizations yet to be defined as "hate groups."

Sadly, the once-great SPLC has abandoned its focus on fighting groups that terrorize the black community. Otherwise, they would be doing something about Planned Parenthood. Instead, the SPLC has turned its efforts towards promoting intellectual terrorism against all opponents of the American Left. Now, virtually everyone who disagrees with SPLC politics is branded a hate group and lumped together with groups like the KKK.

Recently, I learned that the now out of control SPLC has characterized the Alliance Defending Freedom as an anti-gay group, which means they are gearing up to attack and label them a full blown hate group. They already call them an "anti-gay" group. Their reason for the characterization was simply that the ADF opposes efforts of the LGBT community to impose its agenda on those who disagree with them for religious reasons. Some examples of ADF activism in this area follow:

-Representing Bakers. The ADF has represented bakers who have refused to bake cakes for homosexual “wedding” ceremonies. The SPLC has a problem with this - suggesting that siding with the bakers constitutes anti-gay bigotry. In fact, they liken it to the mid-20th Century practice of denying blacks seats at counters in segregated cafes. This is a poor analogy, indeed. In fact, the SPLC position is morally consistent with saying that a black baker should be forced to bake cakes for a fundraising dinner for a white supremacist group. Of course, the moral inconsistency is a reflection of the fact that SPLC is dedicated to identity politics, not to principles of freedom of association and freedom of conscience.

-Representing Photographers. ADF has also defended photographers who refuse to photograph homosexual "weddings." This was also seen as hateful by the SPLC. Imagine what the SPLC would do if a black photographer had been forced to take pictures at a Klan rally. Would the SPLC defend the photographer or the Klansmen?

-Representing Christian Student Organizations. You don't really have to rely on a Klan hypothetical when trying to expose SPLC hypocrisy on the issue of freedom of association. Back in the 1950s, Klansmen really did try to join the NAACP in order to destroy them by changing their statements of belief.

Now, homosexual activists have stolen the old Klan tactic and used it on campus Christian organizations. And the SPLC is right there cheering them on!

Now that some of the Christian groups have gone to the ADF for protection against these Klan-inspired tactics, the SPLC has come out against the ADF - even characterizing their efforts to defend Christian group autonomy as part of a "sharp record of anti-gay bigotry." Switching back to hypothetical mode, imagine that the ADF decided to defend the NAACP from Klansmen seeking to invade the group and change their belief structure. Would ADF be guilty of establishing a "sharp record of anti-Klan bigotry"?

Indeed, highlighting SPLC hypocrisy is like shooting fish in a barrel because the organization has no consistent set of moral principles. That is, unless you characterize defending Leftists no matter what they do as a "moral principal."

Truth be told, the SPLC has become much less of a defensive organization in recent years. These days, they seem to remain on the offensive with this tired business of stigmatizing groups that hold fairly mainstream views as "hate groups." Examples include the American Family Association (AFA), the Family Research Council (FRC), and World Net Daily

It is worth asking what Martin Luther King would think about the AFA or FRC if he were alive today. Would he brazenly lump them together with the KKK and the Aryan Nation? Of course he wouldn’t. In fact, King would probably be among their financial supporters.

It takes real moral bankruptcy to fail to grasp the offensiveness of such brazen moral equivalence. One could only hope that the moral bankruptcy of the SPLC will lead to actual bankruptcy as donors wake up and turn away from the practice of subsidizing their blatant hypocrisy. Or maybe members of the ADF could invade the group and reorganize the SPLCs core beliefs, thus making them consistent.

The core problem with the SPLC is that they simply don't understand the definition of hate speech - the thing they so enthusiastically claim to be eradicating. In reality, hate speech is simply speech that liberals hate because they lack the intelligence required to offer a rebuttal.

Given that the SPLC hates an increasing amount of main stream speech, it is hard to avoid characterizing them as a hate group. Their battle against hate groups would best be advanced by closing their own doors and throwing a giant going out of business party. If they ever do, I will be there to take pictures and bake them a cake.

This piece has been updated for clarity.

LIVE: Knives Out As Bernie Tells His Democratic Opponents To Come Right At Him

Katie Pavlich
Why You Should See How Bernie Does In Texas and California?
Matt Vespa
'Your Job is to Keep Us Safe': Congressional Tensions High as Coronavirus Looms
Ellie Bufkin
Michael Jordan Provides Lighthearted Moment During Kobe Service
Cortney O'Brien