So You're a Revolutionary? Well, Isn't that Cute! 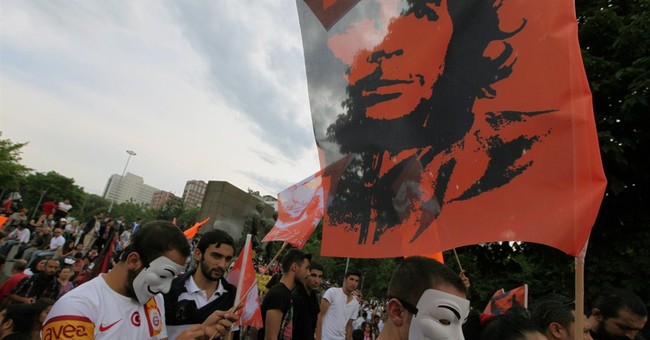 Gabriel Lugo is president of the faculty senate at UNC-Wilmington. He's generally a nice fellow with a good sense of humor. But, unfortunately, on August 9th, he sent out a wildly unprofessional memo to the entire university faculty. His memo lends credence to my concern that the UNC system has become little more than a political lobby for the Democratic legislative agenda. Thus I will soon propose that we rename our school DNC-Wilmington to reflect the fact that it is an institution committed to politics rather than honest intellectual inquiry.

In a section of his memo allegedly updating them on "Legal/Political" issues, Lugo informs the faculty of the following: "Gun legislation was approved. Concealed weapons will be allowed on [sic] locked vehicles in [sic] campus, on [sic] your favorite bars, and on your kid’s playgrounds. Here is how Bill Maher sees it:"

You have to wonder what Lugo was thinking circulating a video suggesting that it should be as easy kill your baby as it is to sell your pickup truck in North Carolina (please, watch the profanity-laced video in its entirety). Our state abortion laws have nothing to do with any pending matter of university business. Lugo is just abusing his position as Faculty Senate President in order to interject his broader political beliefs into university business. Welcome to DNC-Wilmington.

Furthermore, the Maher video is simply grossly misleading on the gun issue. Our state law used to ban handguns in all restaurants that serve alcohol - even if the individual carrier has never had a drop of alcohol in his life. The new law drops the across-the-board ban while maintaining the illegality of carrying a weapon if you have even one drop of alcohol in your system. In addition, all restaurant owners still have the right to ban guns from their premises altogether, whether or not they actually serve alcoholic beverages.

In other words, the new law shifts control from the government to the person who actually owns the business. Since they are liable for things that happen on their property, they are in the best position to make the call. The law makes sense when clowning propagandists like Lugo and Maher are not misrepresenting it. But Lugo is a tenured professor so he can lie with impunity. I’ll have more to say on that later.

Lugo's remarks about guns on playgrounds are particularly strange and misplaced. Previously, there was a ban on handgun possession in all state public parks. The new law lifts the across-the-board ban. As a criminologist, I support that change for two reasons: 1) Personal gun possession has been shown to reduce kidnapping and rape. 2) People are often kidnapped and raped in public parks.

Of course, Lugo's reference to guns in "your kid’s playgrounds" is a childish emotional distortion of the change in the law. And, once again, it has no place in an email dealing with official university business. There are no bars or "kids' playgrounds" on university property. Please just shut up and teach, Gabriel. And stop sending me emails loaded with irrelevant political commentary.

Lugo continues saying "Students will now be allowed to have legal counsel in all hearings. Honor code violation hearings would have been excepted if the Conduct Board consisted only of students, but that is not the case at UNCW."

I'm actually glad Gabriel brought this up. I helped organize and draft that new legislation. And I think I understand why Gabriel is mad at the Republicans for sponsoring it. This new bill makes it impossible for Democrat college administrators to kick kids out of school after questioning them about minor criminal acts in the absence of counsel. It guarantees the kind of due process Che Guevara would oppose. I’ll get to Che later. I'm getting ahead of myself, comrades.

Gabriel continues saying "President Ross is under attack by a number of legislators who want to replace him with one who matches their ideology." As Faculty Senate President, Lugo should know that Ross, the university system president, isn't picked by the legislature. He's picked by the board of governors. And guess who picks them? I’ll give you three guesses and the first two don't count. Hint: it's the governor. Now, stop for a second and ask yourself this question: is Lugo a) just lying about all this stuff? or b) just grossly incompetent? There is no "c" option.

Lugo continues with the promise that he is "starting a business selling Che berets." We'll isn't that cute. Che Guevara used to be a prison guard at a concentration camp that incarcerated homosexuals in Cuba. He admitted to shooting prisoners, including women and children, in the head while they were handcuffed and helpless. How does the LGBTQIA Office feel about Lugo's admiration of Guevara? How about the Women’s Resource Center? And how can Comrade Lugo become a revolutionary like Che if he's afraid of handguns in public places?

Finally, Lugo says "Elections for a new senate president will take place in December." That’s good to hear. I hope they bring back Lugo's predecessor as Faculty Senate President - a feminist who falsely accused a conservative professor of spraying tear gas in her university office. It seems that political paranoia, not competence, is the only qualification for the job.