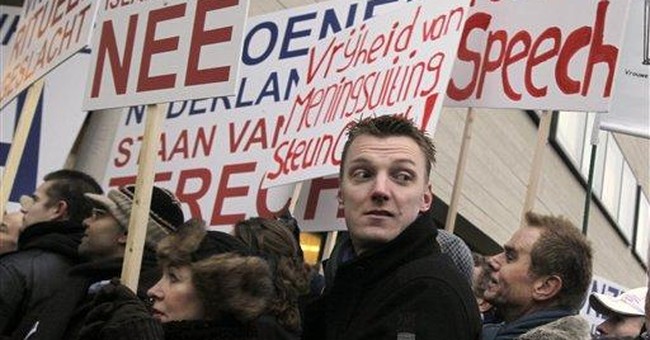 Dutch politician Geert Wilders is being tried in Amsterdam over some controversial remarks he made about terrorism and Islam. I’m glad I live in the United States of America, where such a trial would be prohibited by the First Amendment. I’m also glad I don’t teach at Temple University in Philadelphia, where students now have to pay an unconstitutional after-the-fact security fee levied by the university. This fee was for hosting none other than Geert Wilders.

The notion that it is permissible to charge a student group extra fees for security simply because a speaker's views are controversial (read: not approved of by university administrators) might be acceptable at the University of Havana or the University of Beijing. But it should never happen in America.

Geert Wilders came to Temple University on October 20, 2009. Wilders was invited in the wake of a controversy surrounding his film “Fitna” which was released in 2008. The film was controversial because it features passages of the Koran interspersed with scenes of violence on the part of Muslims. The movie was shown during the presentation at Temple. Extra security was provided and there was no disturbance.

On December 3, Temple University Purpose (TUP) – the group that hosted Wilders -was surprised with a bill from Temple for $800 for a "Security Officer." This came with the explanation that the charge was for the costs "to secure the room and building."

TUP Interim President Brittany Walsh pointed out that Temple had said – prior to the event - the university would pay any extra security costs. But, after repeated emails, she has received no substantive reply. This is odd because, as one can see from their mission statement, TUP is not a conservative group – the type most likely to be singled out for such treatment:

Obviously, this group is being punished financially because it hosted a speaker likely to offend a particularly volatile segment of the population. As a consequence, the Foundation for Individual Rights in Education (FIRE) has written to the president of Temple. In that letter, FIRE cited the U.S. Supreme Court's decision in Forsyth County v. Nationalist Movement (1992), which says, "Speech cannot be financially burdened, any more than it can be punished or banned, simply because it might offend a hostile mob."

Two years ago, Temple's speech code was struck down by the Third Circuit. That lawsuit was handled by my friends at the Alliance Defense Fund. If the university does not begin to respect the First Amendment, additional humiliation and litigation are certain to follow.

My message to Temple University President Ann Weaver Hart is simple: You have been warned. Reverse your course of action or face the consequences. If you do not think I am serious, just ask former Georgia Tech President Wayne Clough.