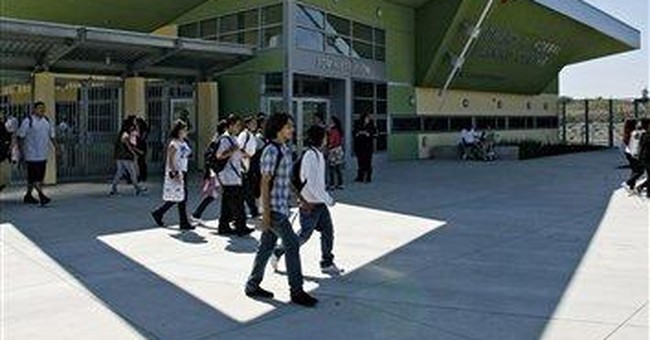 I’ve been warning people for years. In literally hundreds of columns I’ve argued that the liberals who run our institutions of higher learning are literally bankrupting our states. My columns have been filled with more than hollow assertions. They’ve been backed with evidence. And, now, every prediction I’ve made is coming true.

My office phone (here at UNC-Wilmington) was cut off over the summer because the department couldn’t pay the phone bill. Workers have been laid off. We didn’t get a pay raise this year. In fact, we got a pay cut. The room I teach in is boiling hot because the AC is broken and, apparently, the university cannot afford to fix it. I’m usually drenched in sweat by the end of a lecture. When it’s test time, the department can barely afford to run off my exams.

Of course, I don’t mind any of this at all. I’m just basking in the glory of saying “I told you so.” I enjoy knowing that the public no longer questions my credibility on the issue of overspending in higher education. It helps that I’m a well-compensated speaker and writer, too. Like a good capitalist, I’ll do my best to profit from the present fiscal crisis.

Most people understand how we got into this mess in higher education. It’s because high paying administrative positions have been growing at a (much) faster rate than lower paying teaching positions. And the creation of these new positions rarely requires approval from the central administration in Chapel Hill.

But there is one person who doesn’t get it. That person is UNC-Greensboro Chancellor Linda Brady. Here’s what she had to say on August 19, 2009 in a speech at her university:

“This fall I will create a new Office of Equity, Diversity and Inclusion within the Office of the Chancellor. I will also re-establish the Task Force as the Chancellor’s Advisory Committee on Equity, Diversity and Inclusion, which will be housed within this new office in 303 Mossman. A graduate student has been assigned to support the work of the Office and the Committee. Professors Dennison and Gause have agreed to reprise their Task Force roles and co-chair the Committee. Provost Perrin and I will meet with the group in mid-September and will rely heavily on its members for guidance and advice on these issues. In the coming year we expect to clearly define the roles and responsibilities of the Office of Equity, Diversity and Inclusion with the goal of launching a national search in spring 2010 for a senior executive-staff level position to lead this office.”

What Linda Brady didn’t say in her speech is that these offices of “Inclusion” are driving up the cost of higher education. And that’s preventing a lot of working class folks from going to school to improve their lives. Referring to an office that excludes as an office of “inclusion” is, well, Orwellian. It’s like calling the Secretary of War the “Minister of Peace.”

Enter Erskine Bowles – former member of the Clinton Administration and now UNC system president. In an email sent this semester - by Bowles to all 17 UNC university chancellors, including Brady – he said the following: “We have discussed the need to pare administrative costs REPEATEDLY at Chancellor’s meetings.”

Bowles continued, saying this: “And we have made it crystal clear that any further delay in reducing senior and middle management positions would jeopardize our credibility and standing with the General Assembly and the taxpayers of North Carolina.”

Finally, Bowles threatened all 17 chancellors with this: “Hear me loud and clear, we will be looking for PROOF that you have focused FIRST on administrative reductions and solid evidence that you have taken steps to shore up your core academic services.”

And so we have an interesting conflict brewing. Linda Brady believes that no matter how bad things get, financially speaking, the North Carolina taxpayers still have to continue to fund new expansive initiatives whenever terms like “equity”, “diversity” and “inclusion” are invoked. There is no evidence that Brady will be deterred by Bowles’ non-specific threats.

And don’t count on a specific order from Bowles to Brady halting this new effort at “inclusion.” Erskine Bowles is principled for a Democrat. But he’s still a Democrat.

UNCG students and alums are furious at Brady for her efforts to create new diversity initiatives in the midst of such economic turmoil. And there’s only one thing they can do. They must contact Linda Brady and remind her that she is a public servant who works for the people.

I’m going to write Linda Brady right now and argue that there will never be true equity in this county. Unless, of course, the government keeps on spending until we all have nothing.