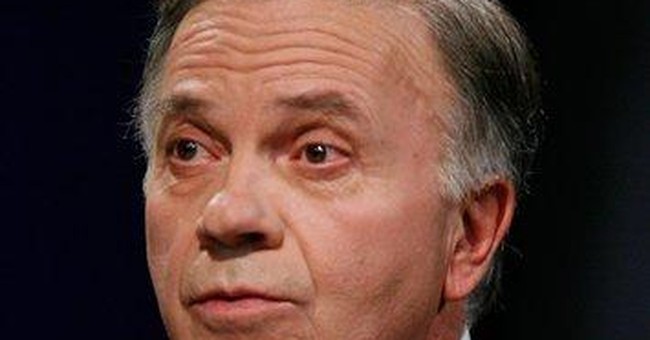 The issue really could not have been simpler. A bunch of protestors at UNC-Chapel Hill decided to interrupt a speech by Tom Tancredo. They disrupted the speech by shouting over him, standing in front of him while he was trying to speak and, finally, by breaking windows in the room where he was speaking.

It worked. Tancredo, feeling threatened, left before giving (all but two minutes of) his speech.

The protestors believed they had a right to disrupt the speech because Tancredo’s argument – that we should enforce immigration laws – was merely “hate speech.” I should not use the term “believed.” These kids don’t have beliefs. They have feelings. They simply felt offended and felt that their feelings trump free speech. And they felt like breaking stuff to show their feelings.

A student named Anthony Dent (along with others) decided to introduce a resolution to condemn the protestor’s actions. He presented it to the UNC Student Congress. Anthony was motivated to do so by an email sent to the UNC student body by Chancellor Holden Thorp.

The chancellor had done the right thing by condemning the protestor’s illegal actions. Mr. Dent’s simple “Resolution to Sustain the Right to Free Speech on Campus” follows in its entirety:

WHEREAS, The April 14, 2009 protests that disrupted and prevented dialogue on a controversial issue amounted to self-censorship;

WHEREAS, One ideal of our University is free academic inquiry;

WHEREAS, Open dialogue and respectful discourse move us towards that ideal.

THEREFORE, BE IT RESOLVED BY THE STUDENT CONGRESS OF THE UNIVERSITY OF NORTH CAROLINA AT CHAPEL HILL THAT:

We affirm Chancellor Thorp’s appropriate and immediate response, and we call upon Chancellor Holden Thorp to follow through on his commitment to discover the identities of the offending students and press criminal charges, if warranted, for the damages wrought upon university property.

AND BE IT FURTHER RESOLVED THAT:

We encourage students to engage on an intellectual level even with those with whom they disagree.

AND BE IT FURTHER RESOLVED THAT:

A copy of this concurrent resolution will be delivered to the office of the Chancellor by the Speaker of Congress.

When I showed this resolution to one of my Democrat colleagues at UNC-Wilmington, he said “They voted against that?” with a heavy emphasis in the word “against.” Indeed, it is tough to imagine a disagreeable word in the resolution. But some in the Student Congress said their “constituents” disagreed with the Chancellor’s statement. So it’s worth reading it in its entirety:

I want to express how disappointed I am in what happened last night when former Congressman Tom Tancredo wasn't able to speak when a protest got out of hand, and our Department of Public Safety had to take action. Congressman Tancredo felt threatened and left without making his remarks.

Mr. Tancredo was scheduled to speak about immigration. We expect protests about controversial subjects at Carolina. That's part of our culture. But we also pride ourselves on being a place where all points of view can be expressed and heard. There's a way to protest that respects free speech and allows people with opposing views to be heard. Here that's often meant that groups protesting a speaker have displayed signs or banners, silently expressing their opinions while the speaker had his or her say. That didn't happen last night.

On behalf of our University community, I called Mr. Tancredo today to apologize for how he was treated. In addition, our Department of Public Safety is investigating this incident. They will pursue criminal charges if any are warranted. Our Division of Student Affairs is also investigating student involvement in the protest. If that investigation determines sufficient evidence, participating students could face Honor Court proceedings.

Carolina's tradition of free speech is a fundamental part of what has made this place special for more than 200 years. Let's recommit ourselves to that ideal.

Just a few weeks before the Tancredo incident, another free speech controversy erupted at UNC-Wilmington. It happened when the Provost yanked several pictures of nude children on display by the Women’s Center in the Randall Library.

The pictures, which showed the exposed breasts and pubic hair of these children, were of concern because of past incidents involving pedophiles frequenting Randall Library (where they were downloading pictures of nude children). UNCW faculty were outraged and passed an academic freedom resolution condemning the administration. Provost Chapman resigned a few weeks later.

To date, there have been no resolutions supporting Tom Tancredo. He doesn’t take pictures of naked little girls.