Michelle Malkin
|
Posted: Jun 20, 2019 12:01 AM
Share   Tweet
The opinions expressed by columnists are their own and do not necessarily represent the views of Townhall.com. 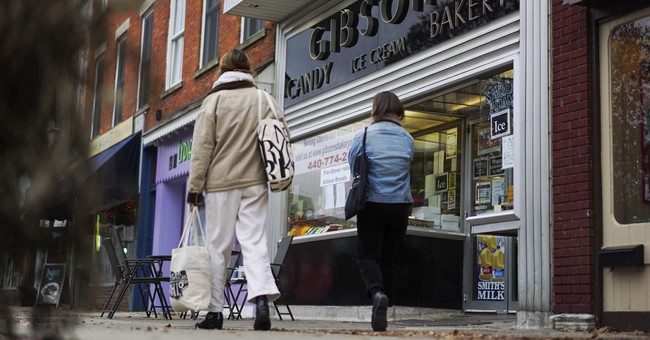 As a right-wing alumna of far-left Oberlin College, I have four words for the administration in response to last week's ground-breaking $11 million jury verdict in the defaming of the humble Gibson's Bakery:

You had it coming.

I have five more words for Oberlin as arrogant college officials continue their obstinate war on the Gibson family even after the much-deserved courtroom defeat:

You still don't get it.

After the college sent out Vice President, General Counsel and Secretary Donica Thomas Varner's June 7 email to alumni disparaging the verdict and lying about the basis for the trial, the jury whacked Oberlin's calumnious crapweasels with an additional $33 million in damages caused by their libel, intentional interference with business, and intentional infliction of emotional distress. Ironically, thanks to Big Business GOP-sponsored tort reforms in Ohio 15 years ago, the awards may be greatly reduced to the relief of the radically liberal college, as Legal Insurrection blogger and law professor William Jacobson points out.

Still, the jury's message to administrators who incited hatred against Gibson's is loud and clear: Stop the racial smears.

Because white townies are presumed guilty until proven innocent, minority students and their mentors leaped to protest alleged institutional racism by a bakery that has nobly and peacefully served and employed people of all races and backgrounds since 1885. Social justice agitators attempted to turn three black student shoplifters into Rodney King-style martyrs and the white Gibsons into the Simi Valley police of Lorain County in late 2016. In August 2017, after the SJW noise died down, the trio of grabby-handed students pleaded guilty to misdemeanor charges ranging from attempted theft and aggravated trespassing to underage purchase of alcohol. They acknowledged in statements that Gibson was within his right to detain shoplifters and all stated in court that Gibson's actions were not racially motivated.

But those admissions were small consolation to the Gibsons, who the dean of students attacked publicly in knee-jerk protests immediately after the theft and who other officials savaged privately in extensive, profanity-laced communications leading up to the bakery's lawsuit and trial. Oberlin Dean of Students Meredith Raimondo put herself in the middle of the maelstrom, complete with bullhorn and flyers declaring Gibson's to be a "RACIST establishment with a LONG ACCOUNT of RACIAL PROFILING and DISCRIMINATION." Oberlin VP of communications Ben Jones lambasted the bakers: "F--- em ... they've made their own bed now." And special assistant to the president Tito Reed condemned the Gibsons' "combined audacity and arrogance to assume the position of victim" as the college sought to pressure the family into exempting all student shoplifters from criminal prosecution in exchange for restoring canceled cafeteria contracts.

I received an even more defiant letter from Oberlin College President Carmen Twillie Ambar on June 14 vowing that "this is not the final outcome." Ambar warns of a "lengthy and complex legal process." Indeed, I'm now hearing from infuriated Oberlin insiders this week that the college persists in treating the Gibson family horribly and refuses to end the horror show, all while blithely assuring alumni that "we value our relationship with the town and region that are our home."

—Another Asian American student I knew accused a white library worker of racism after the poor staffer asked the triggered student to lower the blinds where she was studying.

—In spring 1990, two black female students baselessly accused David Gibson of bigotry after he told them they were not allowed to sit at an outside table because they hadn't purchased any food items from his store. The rule applied to everyone. The perpetually aggrieved students demanded an apology to the entire black student population.

—In 2013, hyped by the administration and power-seeking minority groups, Oberlin made international headline news for a "KKK sighting" that turned out to be a person walking around campus wearing a blanket.

Oberlin alum Beth Kontrabecki Walters summed it well for me in her reflections on campus life and the Gibson's verdict: "What was once considered a forward-thinking and prestigious institution has now become the poster child for intolerant, myopic crybabies. Oberlin should not appeal this decision. ... The multimillion-dollar reward to Gibson's is the public's way of sending a message; it's high time these insulated left-wing incubators put an end to the out-of-control politically correct culture. ... They made an example of Oberlin, and while I agree with the jury completely, as an alum, it is extremely embarrassing nonetheless."

Instead of reexamining its fundamental contempt for Midwest family values, entrepreneurship, the presumption of innocence and the truth about its racial hucksterism, Oberlin recently announced the appointment of a new "Multicultural Resource Center" director focused on nominating future speakers for the college's segregated Black, Asian/Pacific Islander, Latinx, and LGBTQ+ students graduation ceremonies and advancing the "advocacy, equity, and belonging for marginalized students."

In other words: More of the same old toxic stew of anti-white activism masquerading as "education" that landed Oberlin in such humiliating legal trouble in the first place. The jury voted. Now it's time for more parents, alumni and donors of ideological insane asylums like Oberlin to vote with their own feet and pocketbooks. De-fund the divisive defamers of American higher education. It's the only way they'll learn.