Michelle Malkin
|
Posted: Sep 12, 2018 12:01 AM
Share   Tweet
The opinions expressed by columnists are their own and do not necessarily represent the views of Townhall.com. 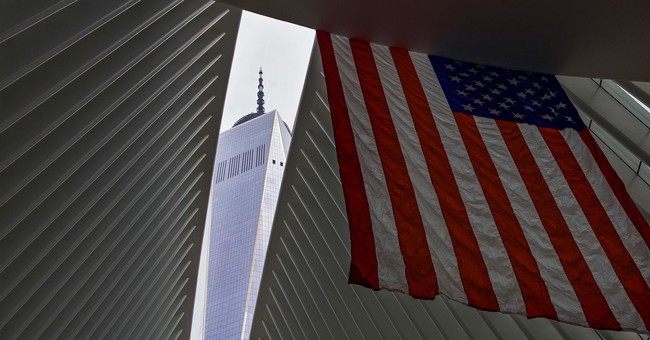 For 17 years, America has engaged in a collective ritual every Sept. 11: Hang flags, light candles, bow heads and make vows to "Never forget."

Then, every Sept. 12, it's back to business as usual: See something, do nothing.

Did you remember that five of the 9/11 hijackers -- Mohamed Atta, Marwan al-Shehhi, Hani Hanjour, Nawaf al-Hazmi and Satam al-Suqami -- carried out their killer plot after overstaying their visas, evading detection and avoiding deportation?

Did you remember that a year after the jihadist attacks that stole nearly 3,000 innocent lives, the 9/11 Commission urged our government to build a biometric entry-exit program to track and remove visa overstayers -- who comprise an estimated 40 percent of the total illegal immigrant population?

Did you remember that Congress had already mandated exactly such a system for all ports of entry -- land, sea and air -- in 1996 as part of the Immigration Reform and Immigrant Responsibility Act?

Janice Kephart, former border counsel on the 9/11 Commission, testified five years ago that "tracking the arrival and departure of foreign visitors to the United States is an essential part of immigration control, with collateral effects on law enforcement and national security." Without both arrival controls and departure records, she warned, "there is no way to know whether travelers have left when they were supposed to."

At least eight separate federal statutes, passed with bipartisan support, have established the parameters and appropriated funds for a foreign visa holder entry-exit system over the past two decades. But as I reported in my book "Invasion" 16 years ago, lobbyists for the travel and tourism industries, airlines, universities, the U.S. Chamber of Commerce and illegal immigrant amnesty banded together to undermine the implementation of this most basic national security program, which every sovereign country needs to defend its borders.

On the 10th anniversary of the 9/11 attacks, GOP House Homeland Security Chairwoman Candice Miller reported on the federal backlog of more than 750,000 unvetted visa overstay records: "If we are serious about controlling who comes into the nation and preventing another 9/11 attack, we need to get serious about an exit program," she testified.

Spoiler alert: The swamp creatures in Washington are not serious.

Now, the Department of Homeland Security reports a whopping 700,000 foreigners overstayed their temporary tourist, business or student visas in fiscal 2017. Most alarming, among the countries with the highest overstay rates are the terrorist breeding grounds of Afghanistan, Iraq, Yemen and Libya.

An estimated 40 percent of the 700,000 student/exchange visa overstays on record last year came from four countries: China, India, South Korea and Saudi Arabia. (In case you'd forgotten, Saudi Arabia sent 15 of the 19 hijackers to America 17 years ago this week.) Jessica Vaughan of the Center for Immigration Studies analyzed the data and flagged five "countries where we need to critically examine visa issuance processes" because of overstay rates of more than 30 percent: Chad, Djibouti, Eritrea, Liberia and the Solomon Islands.

Last year, a DHS inspector general's audit concluded that Immigration and Customs Enforcement cannot account for all visa overstays because its 27 different databases are a stove-piped mess. ICE arrested a measly 0.4 percent of visa overstays (3,402 out of 500,000) it could account for -- in part because investigators couldn't access information or weren't even aware of available national security databases.

President Donald Trump called on Congress to expedite completion of the long-delayed biometric exit program, and several pilot programs at airports are now in place. But Trump faces the same open borders/big business roadblocks that have stymied the system ever since the Twin Towers came crashing down. If Congress wanted to, it could immediately pass measures to make overstaying a visa a felony, to impose re-entry bars on visa violators and to require bonds for foreigners entering through the highest-risk temporary visa programs or from countries of concern.

But annual pretension is so much easier than actual prevention. All remembrance and no action dishonors the 3,000 who died 17 years ago -- and endangers us all.