Death Be Not Loud

Michelle Malkin
|
Posted: Sep 05, 2018 12:01 AM
Share   Tweet
The opinions expressed by columnists are their own and do not necessarily represent the views of Townhall.com. 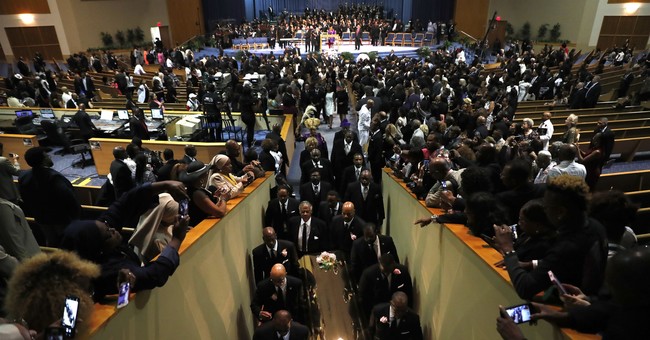 Question: What is more cringe-inducing than a celebrity funeral?

The ghoulish twin spectacles last week memorializing Aretha Franklin and John McCain brought out the worst in family, friends and frenemies. No matter your partisan affiliation, these vulgar exercises in self-indulgence should serve as object lessons on how not to depart with dignity.

There was the nation's most infamous anti-Semite, Louis Farrakhan, smiling like the Cheshire cat onstage with hate crime hoax godfather Al Sharpton and shakedown con artist Jesse Jackson, who exploited his honored platform to threaten funeral attendees: "If you leave here today and don't register to vote, you're dishonoring Aretha."

There was lascivious 72-year-old Bill Clinton ogling 25-year-old Ariana Grande, who was wearing slightly more fabric than she normally wears, roughly equivalent to two 12- by 12-inch lace doilies, as she warbled "Natural Woman." (Clinton's latest public display of asininity closely rivaled his indecent conduct at his former Commerce Secretary Ron Brown's funeral, where the master media manipulator fake-cried after news videographers captured him yukking it up after the National Cathedral service.)

There was boorish Bishop Charles H. Ellis III copping a side-feel of Grande's barely covered bosom in the name of "friendliness."

There was Atlanta pastor Jasper Williams hijacking the Detroit dais to share his unsolicited views on crime and parenting.

Not to be outdone by the disrespectful requiem for the Queen of Soul, the five-day, three-city McCain processional marathon featured a vindictive blacklist (reportedly devised by the decedent himself); passive-aggressive eulogy swipes at President Trump by Meghan McCain, Joe Biden, Barack Obama and George W. Bush; and a hyperbolic media declaration about how the late Arizona senator's passing augured "the death of political courage" itself.

The fact that President Trump is living rent-free in the heads of so many camera-ready mourners says more about the Hollywood and D.C. swamps than it does about anything else. Outside La-La Land and the polarized realm of the Resistance, sane Americans live grounded and healthier lives defined primarily and centrally by family, faith, hard work, quiet charity, devotion to community and self-improvement.

And you, dear politicians, entertainers and bitterly clinging entourages, are not at the center of it.

We've seen this graveyard narcissism intertwined with crass partisanship during televised death rituals before. The late Democratic Sen. Paul Wellstone's funeral, after he perished in a plane crash, reeked of electoral opportunism before the 2002 midterms. In front of 21,000 Minnesotans who had gathered to pay tribute to the man, his family and other aides who died in the tragic accident, Democratic leaders gracelessly turned the memorial into a 3.5-hour campaign rally to elect Wellstone's stand-in. Campaign treasurer Rick Kahn led a chorus of boos directed at then Sen. Majority Leader Trent Lott, who had traveled from Mississippi to pay his respects, and former GOP Sen. Rod Grams.

Then-Governor Jesse Ventura, an independent, condemned the circus and said the Democrats' grandstanding "drove the first lady (Ventura's wife, Terry) to tears;" the couple walked out in protest. GOP senatorial candidate Norm Coleman went on to defeat Wellstone's replacement, the dinosaur Walter Mondale, in what political observers from both sides of the aisle agree was a passionate voter backlash against the funeral fecklessness.

But the main reason for self-restraint, of course, is not electoral self-preservation. It's soul preservation. Sniping about partisan politics on any pulpit or any platform after anyone of any stature has died is just plain petty. Such unhinged diatribes diminish the ranters more than the targets of the rants.

The deeds of the dead should speak for themselves. All else is futile sound and fury, grotesque pomp and theater, meaningless dust in the made-for-TV wind.