Michelle Malkin
|
Posted: Jul 04, 2018 12:01 AM
Share   Tweet
The opinions expressed by columnists are their own and do not necessarily represent the views of Townhall.com. 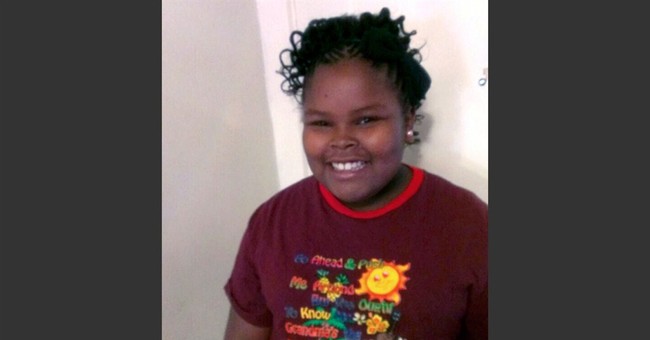 Amid all the raging political headlines and hyperventilating tweets of the Summer of Resistance, a searing ember of news stopped me in my tracks this week.

Jahi McMath has passed away.

I never had a chance to meet the young California teen, but her fight for life gripped me three years ago and was never far from my mind or heart -- especially as my own daughter, the same age as Jahi, battled her own health crisis.

But Jahi's mother, professional nurse Latasha "Nailah" Winkfield, refused to accept their verdict. As a parent, caregiver and believer in Christ, Winkfield was compelled to protect her child. With the help of the pro-life Schiavo Foundation, Winkfield moved with her daughter to a long-term care facility in New Jersey.

Medical ethics scholar Wesley Smith visited Jahi with the Schiavo Foundation's Bobby Schindler 10 months ago and reported: "At the time of the tragedy, I believed ... that Jahi was, indeed, dead. But I now have strong doubts. It's nearly four years later, and Jahi's body still has not broken down...She has experienced no visible bodily decline ... Disabled is not dead."

Dr. Alan Shewmon, professor emeritus of pediatrics and neurology at the University of California, Los Angeles, reviewed nearly 50 videos of Jahi moving her fingers on command last year and wrote in a court declaration that Jahi was "a living, severely disabled young lady, who currently fulfills neither the standard diagnostic guidelines for brain death nor California's statutory definition of death."

And a team of Harvard researchers recently reported that over the past five years, Jahi was indeed growing, digested food, had menstrual cycles, healed wounds and fought off infections. "We would say that Jahi's parents were far from crazy in believing their daughter to still be biologically alive," Dr. Robert Truog, director of the Harvard Center for Bioethics, concluded.

The changed tune of many "experts" came too late for Jahi's family, which had been fighting in court to bring her back to California. After undergoing several surgeries for intestinal problems, Jahi succumbed to excessive bleeding and liver failure after an operation. Jahi will finally head home to Oakland this week, where the family's lawyer says her brain will be preserved for further study.

With all the roar these days of keeping families together, why is there so little media attention to the plight of American families of brain-injured children who've been forced to separate by medical elites making bright-line mortality judgments based on murky diagnostic criteria for what constitutes life?

Also suffering out of the selective media spotlight: Children with rare illnesses ripped from their homes in medical kidnappings by arrogant medical professionals and child welfare bureaucrats who scoff at parental sovereignty and autonomy.

Jahi's life and death inspired other families of disabled children to fight back.

Jahi's life and death resonated beyond ideology, race and class. I'll not forget the Instagram image of Jahi's mom clasping her daughter's hand at her hospital bedside -- an enduring symbol of hope, suffering, resilience and abiding love.

Jahi McMath mattered. She defied her California death certificate. She humbled the experts. She brought joy to her loved ones. Her heart and brain may have stopped, but the light she brought in her short time on earth will not be extinguished.