Return of the Feckless Chick-Fil-A-Phobes

Michelle Malkin
|
Posted: Apr 18, 2018 12:01 AM
Share   Tweet
The opinions expressed by columnists are their own and do not necessarily represent the views of Townhall.com. 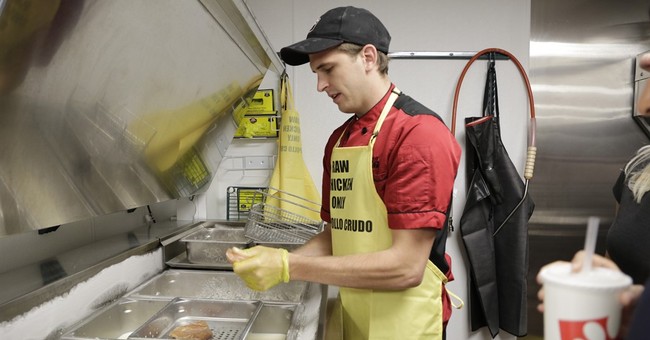 Move over, Trump Derangement Syndrome. Another unhinged liberal pathology is back:

Perhaps, in the interest of public health, the CDC should launch a weekly C-F-A-P surveillance report to map the recurrence of this culturally infectious disease. Early-onset symptoms include fear of pressure-cooked poultry, allergic reaction to waffle potato fries and an irrational hatred of cow costumes. Anti-Christian prejudice and coastal elitism are common comorbidities associated with this debilitating progressive condition.

Ground zero for the latest outbreak? The headquarters of The New Yorker magazine. This week's issue online features the bigoted lament of writer Daniel Piepenbring, who decries the fast-food chain's "creepy infiltration" of the Big Apple and warns against the company's "pervasive Christian traditionalism." Chick-fil-A opened its fourth location in the city last month. The largest franchise in the country, it seats 140, employs 150, and along with the other NYC locations, donates an estimated 17,000 pounds of food to a local pantry for the homeless and hungry. The company is reportedly on track to become the third-largest fast-food chain in the world.

What are the Chick-fil-A-phobes so afraid of?

A private business succeeding in the marketplace based on its merits, without coercion or cronyism.

An enterprise that values hard work, honesty and integrity.

A family-owned American Dream come true that creates jobs, pays taxes, satisfies customers of all backgrounds and gives back to the community.

Horror of horrors, what menaces these sandwich-sellers of faith be!

Chick-fil-A's corporate mission to "glorify God" and "enrich the lives of everyone we touch" leaves The New Yorker scribe terminally heartsick about the "ulterior motive" of its restaurant execs. So do the founding family's commitments to faithful marriages, strong families, Sundays off and the highest standards of character for their employees. The frightened New Yorker critic is especially perturbed by the "Bible verses" enshrined at Chick-fil-A's Atlanta headquarters and by the restaurant's popular bovine mascots -- which he dubs "morbid" and the "ultimate evangelists" -- whose ubiquity on New York billboards and subway corridors is akin to a "carpet bombing."

Notice, by the way, how these hysterical Chick-fil-a-phobes have no qualms about the success of Jewish-owned delis or the spread of Muslim halal food shop operators in New York City who openly pay tribute to their faiths. Imagine a reporter freaking out over Quran verses or Torah citations hung up on a business owner's wall. Welcome to Social Justice 101, where discriminating against Christian-owned business in the name of opposing discrimination is the definition of tolerance.

We've been here before, of course. It was a liberal activist reporter and gay marriage advocate at The New York Times, Kim Severson, who helped launch the first nationwide witch hunt against Chick-fil-A in 2011. The former vice president of the National Gay and Lesbian Journalists Association used her straight-news platform to invoke fear of "evangelical Christianity's muscle flexing" and spread false and libelous attacks on Chick-fil-A founder Truett Cathy and his family as "anti-gay." Her propagandizing in the radical rag of record helped stoke boycotts and regulatory crackdowns by pandering Democrat Mayors Thomas Menino in Boston, Rahm Emanuel in Chicago, and New York City's Bill de Blasio.

And that's what chaps the thin hides of the far-left journalists at The New York Times and The New Yorker who choke at the sights and smells of good, old-fashioned capitalism.

If leftists only want to eat and drink at a global fast-food company whose progressive CEO shares their Democrat-supporting, gun-grabbing, open-borders, gay marriage-boosting values, they should stick to Howard Schultz's Starbucks cafes.