Michelle Malkin
|
Posted: Aug 10, 2016 12:01 AM
Share   Tweet
The opinions expressed by columnists are their own and do not necessarily represent the views of Townhall.com. 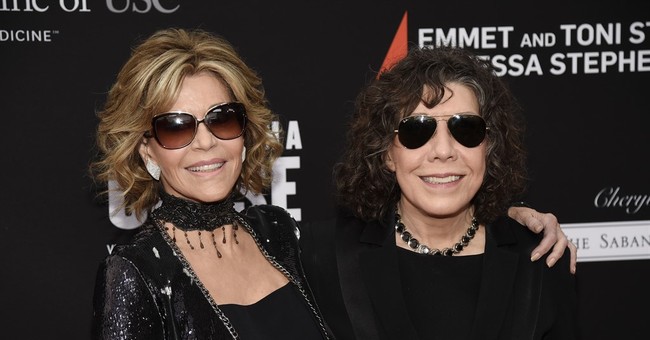 A state economic development commission unanimously voted last week to fork over $1.5 million in taxpayer-funded "incentives" for the liberal duo's romantic flick, arguing that it will generate "great publicity."

But given the fierce opposition so many men and women in uniform in this proud military community have to Hanoi Jane Fonda, I'll bet many of my friends and neighbors wish they could pay to keep the traitorous commie propagandist as far away from the Rockies as possible.

The same goes for Redford, whose last big directing foray was the domestic terrorism-glamorizing hagiography of the Weather Underground movement, "The Company You Keep."

The Colorado panel's got a lousy track record when it comes to picking winners. It last dumped $5 million into cop-bashing Quentin Tarantino's box-office disappointment, "The Hateful Eight."

On a broader policy level, the entertainment corporate welfare racket should offend all taxpayers.

Government officials make phony-baloney claims that their public-private "investments" will pay for themselves. But study after study, on both the progressive left and the free-market right, shows that the economy-stimulating effect of public subsidies for private corporate preferences (movies, sports stadiums, malls, hotels, you name it) is negligible.

The independent California Legislative Analyst's Office found that for every dollar California spent on the $100 million annual film subsidy it created in 2009, the state treasury received 65 cents.

In South Carolina, film incentives returned just 19 cents in taxes for each dollar paid out in rebates. That's "a net loss in revenues equal to 81 percent of expenditures on rebates," as the Tax Foundation pointed out. Maryland barely managed to recoup 6 cents on every spent on its film tax incentive program.

A 2009 report by the Pennsylvania Legislative Budget and Finance Committee found that the state lost nearly $59 million on its $75 million film tax credit and grant program.

Astonishingly, the conservative Mackinac Center in Michigan determined that the state's $500 million spent on film subsidies since 2008 resulted in fewer film jobs than when the program started.

And after reviewing Hollywood handout programs in more than 40 states, the left-wing Center on Budget and Policy Priorities found that subsidies reward companies for production that would have happened anyway; most of the top jobs "created" by the "incentives" go to out-of-state industry veterans, and the revenue generated by economic activity supposedly tied to the subsidies "falls far short of the subsidies' direct costs to the state."

Perspective: The nearly $1.5 billion in direct Hollywood giveaways doled out every year since 2010 by state governments is equivalent to "the salaries of 23,500 middle school teachers, 26,600 firefighters, and 22,800 police patrol officers."

It's the same story north of the border. Canadian Taxpayers Federation analyst Jordan Bateman reported that British Columbia's treasury "likely lost $220 million or more" in public film production funding "that should have gone to education, health care or tax cuts."

In Iowa, six officials were fired or forced to resign over allegations they squandered film tax credit funding on personal luxury goods, including a Land Rover, and steered the subsidies to unqualified recipients.

Louisiana's top film official went to prison for accepting bribes from a movie producer in exchange for state tax credits.

This whole stinking enterprise is a crime. When Big Hollywood and Big Government conspire to turn Jane Fonda and Robert Redford into welfare mooches at ordinary Americans' expense, it's time to yell "Cut!"-- permanently.