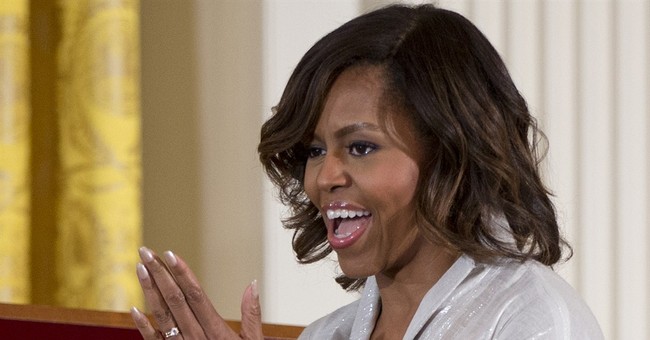 Look out, everyone: The nation's school lunch lady, Michelle Obama, is mad. With her federal nutrition program under fire across the country and now on Capitol Hill, Mrs. Obama put out a "forceful" call to arms this week to "health activists," according to The Washington Post.

She's cracking the whip. Her orders are clear: There must be no escape. The East Wing and its sycophants zealously oppose any effort to alter, delay or waive top-down school meal rules. Big Lunch must be guarded at all costs.

Progressives blame kid-hating Republicans and greedy businesses for the revolt against Mrs. Obama's failed policies. But the truth is right around the corner in your students' cafeterias. Districts are losing money. Discarded food is piling high. Kids are going off-campus to fill their tummies or just going hungry.

According to the School Nutrition Association, almost half of school meal programs reported declines in revenue in the 2012-13 school year, and 90 percent said food costs were up. Local nutrition directors are demanding more flexibility and freedom. Look no further than school districts in Los Angeles and Chicago.

As I noted in 2011, the L.A. Unified School District pronounced the first lady's federally subsidized initiative a "flop" and a "disaster." Principals reported "massive waste, with unopened milk cartons and uneaten entrees being thrown away." The problem has only worsened. The Los Angeles Times reported last month that the city's students throw out "at least $100,000 worth of food a day -- and probably far more," which "amounts to $18 million a year."

Draconian federal rules dictate calorie counts, whole-grain requirements, the number of items that children must put on their trays, and even the color of the fruits and vegetables they must choose. Asked for a solution, LAUSD Food Service Director David Binkle told the Times bluntly: "We can stop forcing children to take food they don't like and throw in the garbage."

Or you can do what Arlington Heights District 214 in Michelle Obama's home state of Illinois just did: Vote yourselves out of the unsavory one-size-fits-all mandate. Last week, the state's second largest school district decided to quit the national school lunch program altogether. Officials pointed out that absurd federal guidelines prevented them from offering hard-boiled eggs, hummus, pretzels, some brands of yogurt, and nonfat milk in containers larger than 12 ounces.

The district will deliberately forgo $900,000 in federal aid and instead rely on its own nutritionist to devise healthy choices that students actually want. One local parent summed it up well: "(T)he government can't control everything."

As more schools look to withdraw, you can bet on the White House to ramp up the Republican-bashing rhetoric. Mrs. Obama's advocates have already taken to social media to complain about Big Business special interests. But let's remember: Mrs. Obama has been working the food circuit since 2005, when the wife of newly elected Sen. Barack Obama was named to the corporate board of directors of Wal-Mart processed foods supplier TreeHouse Foods Inc. -- collecting $45,000 in 2005, $51,200 in 2006, and 7,500 TreeHouse stock options worth more than $72,000 for each year.

Fact: The first lady has been the most insatiable crony at the center of the Fed Foods racket. Her nonprofit Partnership for a Healthier America has reported assets of $4.5 million from secret donors. It's not just mean conservatives pointing out her Big Business ties. The left-wing documentary "Fed Up" made the same point before being edited under pressure. Hello, Chicago Way.

Mrs. Obama's allies also have accused opponents of wanting to repeal "science-based" standards. But the first lady herself was caught spreading false claims that her program was responsible for reducing childhood obesity, when the decline began a decade ago.

Waste, failure, lies and special interest ties. If federal food policy were really about the children, the East Wing would be embracing change. But this is not about protecting the kids. It's about protecting Michelle Obama. Her thin-skinned response to criticism is telling: