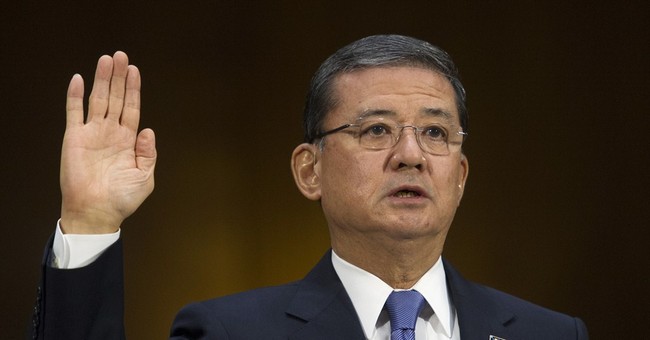 At least 40 American veterans are dead thanks to bureaucratic delays at Veterans Affairs clinics. But you wouldn't know it from VA Secretary Gen. Eric Shinseki's bland and bloodless demeanor at a Senate hearing Thursday. He droned on like an apathetic office manager fielding complaints about the copier being jammed.

Shinseki told the Senate panel he "can't remember" getting warnings from federal watchdogs last fall about ghost clinics and double-scheduling schemes. He said he was "not aware" of explosive book-cooking allegations like the ones at a Fort Collins, Colo., VA facility, where employees were ordered to make their records show that veterans got appointments within 14 days of the day requested, whether or not it was true.

In response to bipartisan disgust with the VA's serial incompetence and fatally long wait times, oblivious Shinseki blathered about "customer satisfaction surveys." And when it came time to deliver his calculated sound bite about being "mad as hell" at mounting allegations of criminal fraud and neglect, Shinseki's perfunctory tone echoed a jaded 411 operator: "City and state, please?"

Asked whether VA employees who alter records should be fired, Shinseki's deputy Robert Petzel said he didn't know "whether that's the appropriate level of punishment." Shinseki interjected that a whopping 3,000 VA workers, including senior managers, had been "involuntarily removed" for misconduct last year -- only to admit that an unknown number of those had simply been reassigned or allowed to retire.

In true paper-pusher form, the VA's top brass have ordered yet another study to assess how and why the VA ignored years of other studies, reports and audits of the department's waste, fraud and abuse. Showing even more tone-deafness, Shinseki bragged openly about his close friendship with top White House aide Rob Nabors, who is now overseeing the kabuki "review" of his department's failures.

Can you spell crony whitewash?

Pressed on why he hadn't reported illegal data falsification to the FBI, Shinseki demurred that it was the inspector general's call, not his.

In other words: The buck stops somewhere else.

Attorney General Eric Holder hid behind the VA inspector general, too. There are no plans for a DoJ probe into the secret waiting lists at the Phoenix VA hospital, where scores of sick vets languished for months before perishing. Question: Why is activist zealot Holder so content to wait for the IG?

Given this administration's shady record of crushing whistleblowers, railroading IGs and replacing them with dirty lapdogs, Shinseki's vow to "get to the bottom" of this latest deadly scandal while Holder and the FBI sit on the sidelines stinks to high hell.

Taking care of the nation's war veterans is an obligation that has existed since the days of the Continental Congress. But for decades, under both GOP and Democratic administrations, the men and women who served our country have been literally left to die by government caretakers.

Fifteen years ago, I reported on VA bureaucrats who took better care of administrative buildings and vacant hospitals than their own patients. Back then, an independent General Accounting Office found that the agency was spending more than $1 million a day to sustain unneeded hospital buildings. Another $35 million was squandered annually to perform upkeep on empty space, including unused lots and warehouses, while vets were forced to file malpractice suits over substandard care.

We "have created the damnedest country club in America," one VA watchdog activist I quoted said at the time. "Whatever toys they want, they get. Nobody is watching what they spend these millions of dollars on, and obviously, no one cares."

Fifteen years later, it's the same old, same old. More empty excuses, feckless denials and deadly red tape. The names change, but the game's the same: "Support the troops" platitudes and photo-ops at 1600 Pennsylvania Avenue. "Screw the troops" in the bowels of the VA bureaucracy, where book-cookers were busy collecting bonuses instead of saving lives. And everyone at the top refuses to resign.

It's self-serving government as usual. I'd ask how "hope and change" is working out for the affected veterans. But they're not around to answer. Their chilling silence speaks volumes.