John Murtha: Requiem for a Corruptocrat 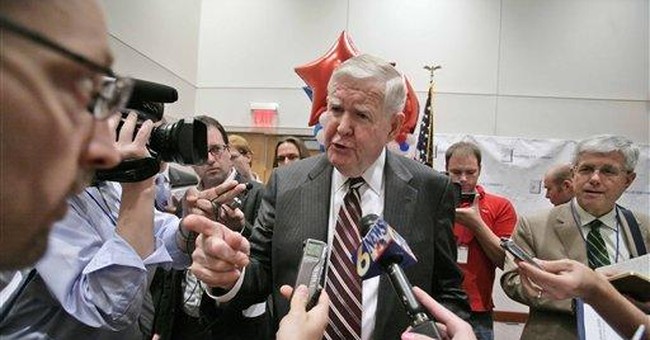 We are not supposed to speak ill of the dead. But those whom the deceased viciously smeared and humiliated deserve to be defended. Entrenched Democratic Rep. John Murtha passed away on Feb. 8 after a botched gallbladder surgery. He has been hailed as a "military advocate" (Associated Press) and "one of the greatest patriots ever to serve in Congress" (former Democratic Rep. Harold Ford Jr.). These obsequious obituaries leave out inconvenient truths:

John "Jack" Murtha was an unrepentant smear merchant and corruptocrat to the bitter end.

In May 2006, during an MSNBC TV show appearance that Marines and their families will never forget or forgive, Murtha accused U.S. troops of wantonly killing some two dozen civilians, including children, in the terrorist stronghold of Haditha, Iraq. Bellowed Murtha: "Our troops overreacted because of the pressure on them, and they killed innocent civilians in cold blood." Murtha publicly indicted the Marines before military investigations had been completed. His remarks opened military-bashing floodgates around the world.

In the wake of Murtha's reckless blabbing, MSNBC executioner Keith Olbermann accused the Haditha Marines of "willful targeted brutality." The Nation magazine claimed that "members of the 3rd Battalion, 1st Marine Regiment perpetrated a massacre." The New York Times dubbed Haditha the "defining atrocity" of the Iraq war. International papers piled on with Vietnam-era "My Lai" allusions. Murtha cold-bloodedly sat back and enjoyed the ride while the Marines were left twisting in the wind.

By 2008, seven of the Marines charged in the incident had been exonerated or had charges against them dropped. Lt. Andrew Grayson was acquitted. Lance Cpl. Stephen Tatum, Capt. Lucas McConnell, Lance Cpl. Justin Sharratt, Sgt. Sanick Dela Cruz and Lt. Col. Jeffrey Chessani all had their cases dismissed. Sgt. Frank Wuterich, the last of the Marines facing charges, awaits a long, dragged-out trial this year.

Murtha, the so-called "military advocate," went to his deathbed refusing to apologize or retract the attacks on the Haditha Marines (several of whom unsuccessfully sued him for libel to restore their honor). Decent people would call this intransigent treachery. Murtha's friends apparently consider it great patriotism.

First, foremost and forever, Jack Murtha took care of Jack Murtha. The glowing encomiums from his liberal colleagues have glossed over the 19-term Democrat's defining moment of political self-service. In 1980, Murtha was an unindicted co-conspirator in a massive bribery probe -- in which undercover FBI agents videotaped Murtha entertaining a $50,000 bribe from agents posing as emissaries for Arab sheiks trying to enter our country illegally. From transcripts of those conversations published by the late newspaper columnist Jack Anderson, Murtha's true colors shined:

"I want to deal with you guys awhile before I make any transactions at all, period. … After we've done some business, well, then I might change my mind. …"

Murtha worried not about his integrity or how his constituents might be harmed, but about getting ratted out:

"You give us the banks where you want the money deposited," offered one of the bagmen.

"All right," agreed Murtha. "How much money we talking about?"

By the time of his death, Murtha had been caught intervening on behalf of a law-breaking Pennsylvania company convicted of selling military equipment parts illegally overseas; had steered unprecedented billions in federal earmarks to friends, family and donors; had earned multiple "most corrupt in Congress" designations from both the left-leaning Citizens for Responsibility and Ethics in Washington and the right-leaning Judicial Watch; and had remained intimately tied to PMA Group, a former lobbying firm under federal investigation, and Kuchera Industries, a defense contractor also under federal investigation.

From his character assassination of innocents to his insatiable appetite for pork and power, Jack Murtha embodied everything that is wrong with Washington. If only the culture of corruption he serviced could be buried six feet under with him.