The Selective Transparency of Barack Obama 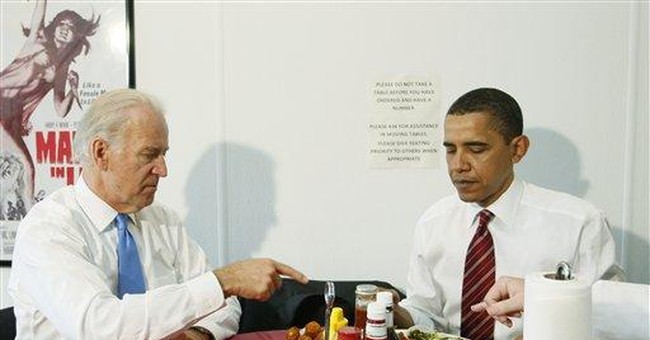 Sunlight is for suckers. The New York Post reported on Tuesday that the White House will not release the $328,835 snapshots taken of the president's Boeing VC-25A that buzzed lower Manhattan. The entire world has seen news and amateur photos and videos of the incident, but if President Obama has his way, taxpayers won't be able to see the flyover photos they paid for with their own money.

This will make for an interesting response to my Freedom of Information Act requests. After the bizarre mission caused distress and panic among countless New York City residents who were intentionally left in the dark about the photo-op stunt, I filed public records requests with the Office of the Secretary of Defense and the Joint Staff FOIA Requester Service Center.

The first one requests any and all communication -- including e-mail and other public records and including any and all correspondence between the White House Military Office, Department of Defense and other agencies -- related to the planned federal aerial mission over New York City on April 27, 2009. Specifically, I requested all public records related to and including the flight manifests and related to the origin of the request for the mission. The second filing requests any and all photos taken during the planned federal aerial mission approved by the White House Military Office.

What rationale could they possibly use to stifle public disclosure? National security? These were glamour shots to enhance the Air Force One photo portfolio. That's no secret. The White House 'fessed up on that. Withholding the photos serves only one purpose: protecting the backsides of those involved in this botched PR mission.

From Day One, Obama has demonstrated a rather self-serving selectivity when it comes to transparency. The Obama White House rushed to reverse an 18-year ban photographing the flag-draped coffins of troops arriving back on American soil. And at the behest of the American Civil Liberties Union, his administration is set to release at least 21 classified photographs by May 28 showing detainee abuse in prisons in Iraq and Afghanistan. Openness in government is fine if it hurts America's reputation, but not if it harms Obama's.

Moreover, hostility to transparency is a running thread through Obama's cabinet:

-- Secretary of State Hillary Clinton for years fought disclosure of massive donations from foreign governments and corporations that filled her husband's library and foundation coffers.

-- Top Obama adviser David Axelrod ran fear-mongering campaigns in support of a huge utility rate hike -- and failed to disclose that the ads were funded for Commonwealth Edison in Chicago.

-- Labor Secretary Hilda Solis failed to disclose that she was director and treasurer of a union-promoting lobbying group pushing legislation that she was co-sponsoring.

-- Attorney General Eric Holder overruled his own lawyers in the Justice Department on the issue of D.C. voting rights (which he and Obama support) and refused to make public the staffers' opinion that a House bill on the matter was unconstitutional.

-- And as I reported last month, Obama's nominee for the No. 2 official at the Department of Housing and Urban Development, former King County, Wash., executive Ron Sims, has the distinction of being the most fined government official in his state's history for suppressing public records from taxpayers.

Obama set the tone, breaking his transparency pledge with the very first bill he signed into law. On January 29, the White House announced that the Lily Ledbetter Fair Pay Act had been posted online for review. One problem: Obama had already signed it -- in violation of his "sunlight before signing" pledge to post legislation for public comment on the White House website five days before he sealed any deal.

Obama broke the pledge again with the mad rush to pass his trillion-dollar pork-stuffed stimulus package full of earmarks he denied existed. Jim Harper of the Cato Institute reported in April 2009: "Of the eleven bills President Obama has signed, only six have been posted on Whitehouse.gov. None have been posted for a full five days after presentment from Congress…"

It's this utter disregard for taxpayer accountability that prompted hundreds of thousands of citizens to take to the streets on Tax Day for Tea Party protests. The trampling of transparency inspired signs that read: "No legislation without deliberation" and "READ THE BILL FIRST." Obama's response was first to claim that he hadn't even heard of the Tea Party movement, and then, on his 100-day celebration, to deride all those Americans he is supposed to represent for "playing games."

Projection, anyone? When it comes to toying with transparency, President Obama is a master at "playing games."