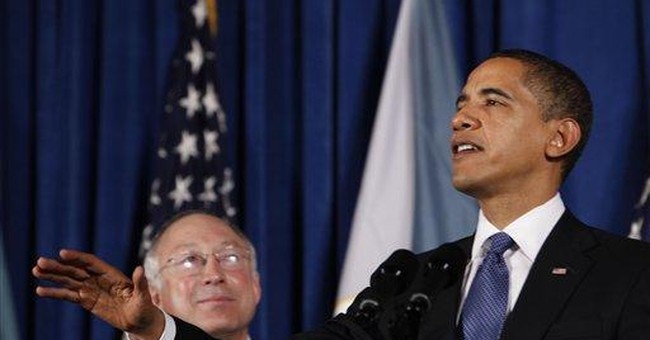 Enough. In a word, that is the message of disgusted taxpayers fed up with the confiscatory policies of both parties in Washington. George Bush pre-socialized the economy with billion-dollar bailouts of the financial and auto industries. Barack Obama is pouring billions more down those sinkholes. It isn't just the camel's back that's broken. His neck and four legs have all snapped, too.

Enough. Last Friday, thousands of Americans turned out to protest reckless government spending in the pork-laden stimulus package, the earmark-clogged budget bill, the massive mortgage-entitlement program and taxpayer-funded corporate rescues. Contrary to false left-wing blog smears that the hastily planned impromptu events were "Astro-turfed," the crowds were packed with first-time grassroots activists. They were people with families and day jobs whose usual definition of "community organizing" involves neighborhood yard sales or their kids' soccer matches. They were members of the silent majority who decided to be silent no more.

Enough. These "Tea Party" protests spanned the sunny Santa Monica pier to the icy streets of Chicago and Cleveland to rain-drenched Atlanta, overflowing the grounds of the St. Louis Gateway Arch, with massive turnouts in Greenville, S.C., and crowds of several hundred each in New York City and Washington, D.C., and all points in between. Like those who demonstrated before them in Seattle, Denver, Mesa, Ariz., and Overland Park, Kan., two weeks ago, the Tea Party participants held homemade signs that said it all: "Your mortgage is not my problem"; "Liberty: All the stimulus we need"; "No taxation without deliberation."

The speed and scope with which they mobilized were due not to nefarious outside conspiracists, but to social networking websites Facebook and Twitter, where a burgeoning network on Twitter called Top Conservatives became the central clearinghouse for information. Planning for a new wave of demonstrations on April 15 has begun at www.taxdayteaparty.com.

Enough. While they take to the streets politically, untold numbers of America's wealth producers are going on strike financially. Dr. Helen Smith, a Tennessee forensic psychologist and political blogger, dubbed the phenomenon "Going Galt" last fall. It's a reference to the famed Ayn Rand novel "Atlas Shrugged," in which protagonist John Galt leads the entrepreneurial class to cease productive activities in order to starve the government of revenue. (Not coincidentally, Rand's novel sales are up and John Galt references punctuated many of the Tea Party demonstrations.) Dr. Smith was inundated with stories like these:

"I have frozen hiring in my firm. … No investments will be made in taxable accounts -- only 401k/IRAs. I am buying silver and gold instead of CDs or stocks with non-qualified money and savings. I have stopped taking new clients, thus freezing my income. I barter more and more. Spend less. I stopped leveraging assets (don't borrow)."

"I have cut WAY back -- I'm no longer buying retail, driving out of a 10-mile radius, spending money on eating out or putting my money in a savings account. I am using the money to pay off all of our debt. It has made our family closer, more appreciative."

Another blogger wrote: "Last year my family paid nearly $1,000 a month in federal taxes, and we are not by any stretch of the imagination rich. I'm going to make it my business to cut that amount in half, using every legal means possible and reducing my income so there is less to tax."

Enough. Those business owners are not alone. This week, ABC News spotlighted upper-income earners going Galt in response to Obama's proposed tax hikes on families with incomes of $250,000 or more. A Lafayette, La., attorney told the reporter she was cutting back on her business to avoid the tax threshold: "Why kill yourself working if you're going to give it all away to people who aren't working as hard?" Tax hikes have consequences. Incentives matter. Only self-deluded wealth redistributors living in la-la land believe otherwise.

Another business owner, Dr. Sharon Poczatek, explained: "The motivation for a lot of people like me -- dentists, entrepreneurs, lawyers -- is that the more you work the more money you make," said Poczatek. "But if I'm going to be working just to give it back to the government -- it's de-motivating and demoralizing."

The perpetual Borrow-Spend-Panic-Repeat machine in Washington depends on the capitulation of the wealth producers. There's only one monkey wrench that can stop the redistributionist thieves' engine. It's engraved with the word: Enough.