GOP: Time To Get Things Undone 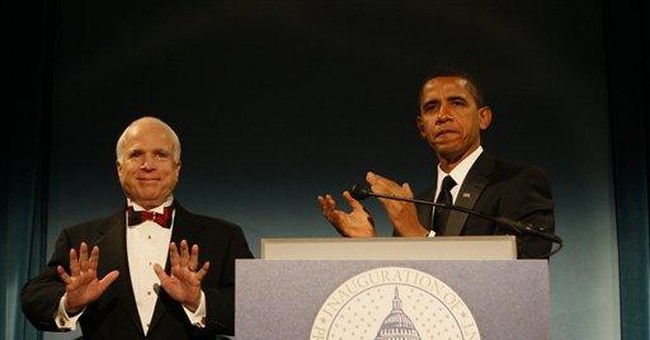 President Obama thinks he knows what the primary objective of Republicans in Washington should be: to "get things done." Bashing Rush Limbaugh last week, Obama urged GOP lawmakers to ignore the voices of obstructionism and sign on to his behemoth stimulus package: "We shouldn't let partisan politics derail what are very important things that need to get done." Meeting with GOP leaders on Tuesday, Obama repeated his entreaty: "I don't expect 100 percent agreement from my Republican colleagues, but I do hope that we can all put politics aside and do the American people's business right now."

Since when did it become the Republican Party's top priority to "get things done"? It was as annoying a campaign platitude when John McCain adopted it as it is now coming from Obama's lips.

History has shown us that "Get Things Done" is mindless liberal code for passing ineffective legislation and expanding government for government's sake. "Reaching across the political aisle" and "putting politics aside" always entail selling out the right and putting conservative principles aside. How about preventing the damage done by Democratic meddlers trying to get their "things done"? How about getting more things undone?

For the past year, I've chronicled the inevitable lard-up of bipartisan bailouts and stimulus boondoggles -- and the predictable Chicken Little dance in Washington when these massive emergency "fixes" have fallen short. Contrary to the belief that Obama is America's Lightworker who can defy political gravity, H.R. 1, the American Recovery and Reinvestment Act of 2009, guarantees more of the same old borrow-spend-panic-repeat cycle that got us into our current mess in the first place. This is not an investment in America's future. It's an unprecedented mortgaging of America's future -- which is why the bill is forever known in my book as the Generational Theft Act of 2009.

The ruckus over Nancy Pelosi's contraception funding (which still may sneak its way into the bill) is the tip of the iceberg. Despite Obama's vow to prevent earmarks from bogging down the bill, the package is stuffed with goodies for every special interest group from left-wing fraudsters ACORN and other subprime shakedown activists ($4 billion for "neighborhood stabilization") to Hollywood ($246 million in new targeted tax breaks) to universal health care promotion ($600 million) to dubious "green job" projects ($24 billion). More fundamentally, there is no there there.

On Monday night, the Congressional Budget Office sent out a full analysis of the House stimulus bill. The new report elaborates on what last week's partial analysis disseminated by Republican Hill sources illuminated: The vaunted infrastructure spending will take years and years and years to kick in. Just 7 percent of the total $800 billion-plus stimulus funding would enter the economy by the end of this year.

The nonpartisan CBO tells eternal truths about government spending in the past, present and future:

"Frequently in the past, in all types of federal programs, a noticeable lag has occurred between sharp increases in budget authority and the resulting increases in outlays. Based on such experiences, CBO expects that federal agencies, along with states and other recipients of that funding, would find it difficult to properly manage and oversee a rapid expansion of existing programs so as to expend the added funds as quickly as they expend the resources provided for their ongoing programs.

"Brand-new programs pose additional challenges. Developing procedures and criteria, issuing the necessary regulations, and reviewing plans and proposals would make distributing money quickly even more difficult -- as can be seen, for example, in the lack of any disbursements to date under the loan programs established for automakers last summer to invest in producing energy-efficient vehicles. Throughout the federal government, spending for new programs has frequently been slower than expected and rarely been faster."

Translation: They can't spend the stimulus money fast enough to actually stimulate anything other than campaign coffers, media buzz and bureaucratic paperwork.

And that must be the message of gimlet-eyed fiscal conservatives in Washington who should wear the "obstructionist" badge proudly. Obstructionism in the name of fiscal sanity is no vice. Panicked profligacy in the name of blind bipartisanship is no virtue.