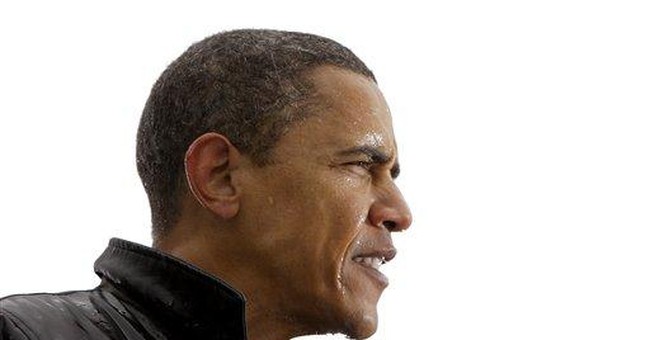 To paraphrase Queen Elizabeth II, 2008 is not a year on which honest journalists shall look back with undiluted pleasure. This has turned out to be even more of an annus horribilis than 2004, when Dan Rather's fake Bush/National Guard memo fiasco redefined the "BS" in CBS News. There were so many mainstream journalists swimming in the Democratic tank this year, the nation's newsrooms looked more like overcrowded aquariums at PetSmart.

In less than a week, the campaign season will be over. But the Obamedia's most shameful biases and notorious blunders shall not be forgotten. Here are my Top Five, by no means comprehensive and in no particular order:

1. The Los Angeles Times and the suppressed Obama/Jew-bash videotape.

Wallsten reported that the "event was videotaped, and a copy of the tape was obtained by The Times." But the news organization refuses to let readers watch the video of Obama and his left-wing terrorist friends and will not release the tape. It's "old news" now.

The paper had no problem, however, embedding a video clip of Sarah Palin's 1984 swimsuit pageant on its gossip blog and deeming it newsworthy.

In May, CNN posted "breaking news video" of female journalists on Obama's press plane fawning over the Democratic presidential candidate as he talked on his cell phone. The caption listed on the network's website: "Obama in jeans: Sen. Barack Obama surprises the press corps by wearing jeans."

In the clip, several members of the press corps yell at a Secret Service agent to "sit down" because she's obstructing the view of their beloved Obama. They giggle and sigh as Obama straddles over a row of seats and they furiously click away on their cameras. "You're killing us," one of them says breathlessly.

No, you're killing yourselves.

Runners-up for Most Drool-Covered Groupies: The journalist who squealed "He touched me!" at the UNITY minority journalists' convention in July; the MSNBC producer who broke down and shed tears of joy upon learning that The One had clinched the Democratic presidential nomination; MSNBC host Chris Matthews, who proclaimed that he "felt a thrill up his leg" after an Obama speech in February; Oprah Winfrey, who confessed she did a "happy dance" for Obama; and the writer for the German publication Bild, who worked out with Obama at the Ritz-Carlton in Berlin and reported: "I put my arm around his hip -- wow, he didn't even sweat! WHAT A MAN!"

Publisher David Bradley's once-esteemed magazine hired celebrity lens-woman Jill Greenberg to snap portraits of John McCain. Greenberg, an outspoken left-winger who goaded children into crying on film and captioned the images with anti-Bush slogans, sabotaged the photo shoot and gloated about it on a photo industry website.

After tricking McCain into standing over a strobe light to create ugly shadows on his face, she then posted vandalized versions of the imagery on her personal website with crude, vulgar labels. One featured McCain with fangs and blood dripping from his mouth -- with the Greenberg-added words, "I am a bloodthirsty warmongerer (sic)." Another piece of her "art" showed an ape (a favorite Greenberg subject) defecating on McCain's head. The highly respected editors at Atlantic professed shock despite Greenberg's notoriety. The name of her blog: "Manipulator."

4. The quote doctors and math-manglers at CNN.

In a botched attack on Sarah Palin, CNN reporter Drew Griffin cited National Review writer Byron York allegedly questioning Palin's abilities and character: "The National Review had a story saying that, you know, I can't tell if Sarah Palin is incompetent, stupid, unqualified, corrupt, or all of the above." York, however, was characterizing the press coverage of Palin.

In a botched tally, CNN anchor Soledad O'Brien proclaimed that an audience poll showed "overwhelming" preference for Joe Biden after the vice presidential debate. A freeze frame of the show of hands, however, showed the audience split. The mathematically challenged O'Brien also claimed that Palin slashed Alaska's special needs budget by 62 percent (which she recycled from the liberal Daily Kos blog), despite the fact that the governor increased special needs funding by 12 percent. Facts, schmacts.

The gossip mag's partisan slime job on Palin and her family ("Babies, lies, and scandal") last September opened the floodgates of Palin-bashing across the mainstream media and was the nadir of the year. Wenner -- a prominent Obama backer who ran countless hagiographies of him in sister publication Rolling Stone and featured the Obamas with the slavering headline "Why Barack Loves Her" on Us Magazine's June cover -- had his media flack e-mail the anti-Palin hit piece to all media in St. Paul for the Republican National Convention: "Might be useful as an illustration of how the news is playing out," the flack wrote.

Indeed, the side-by-side covers of the Palin smears and the Obamas' deification perfectly illustrate the year in Obamedia.