The Rage That's Not On Your Front Page 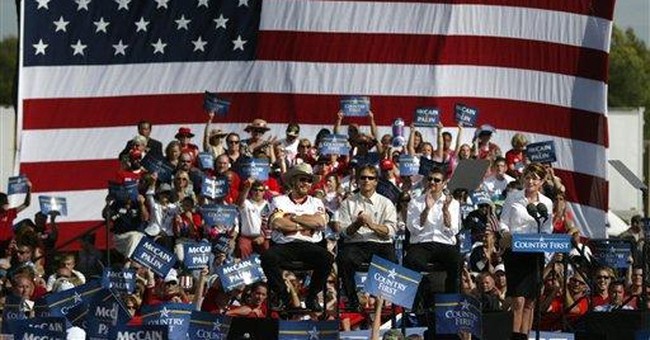 When a few unruly McCain-Palin supporters show their anger at campaign rallies, it's national news. It's an epidemic of "Weimar-like rage" and "violent escalation of rhetoric," according to New York Times columnist Frank Rich. It's the "re-emergence of the far right as a power in American politics," according to Washington Post columnist E.J. Dionne. It's a mass movement of GOP crowds "gripped by insane rage," according to newly minted Nobel Prize winner Paul Krugman.

Too bad they don't give out global awards for the Blindest Eyes in Punditocracy. We've just hit a trifecta.

Are a few activists on the right getting out of hand? Probably. Between massive ACORN voter fraud, Bill Ayers' and Jeremiah Wright's unrepentant hatred of America, and John McCain's inability to nail Barack Obama on his longtime alliances with all of the above, conservatives have plenty to shout about these days.

But a couple of random catcallers do not a mob make. And there's an overflowing abundance of electoral rage on the left that won't make it onto your newspaper's front page.

Last month on the Upper West Side of Manhattan, a small, brave contingent of McCain supporters marched through the streets with campaign signs. They were met by a menacing horde of New Yorkers who displayed their disapproval with a barrage of jeers and vulgar gestures. ("The number of middle fingers in the 'progressive crowd' is directly proportional to the number of Ph.D. degrees in the 10-block radius," one of the witnesses wryly observed.) A YouTube video of the confrontation now has nearly half a million views (www.youtube.com and search "Pro-McCain March in Manhattan"). But don't expect to find it on the nightly news. It doesn't fit the Angry Right narrative.

Neither does the near-riotous reaction of Obama supporters to a McCain-Palin sign in Democrat-dominated Prince George's County, Md. Buried in a back local section, The Washington Post reported this week that "pandemonium" broke loose when an unsuspecting businessman erected a "Country First. McCain/Palin." message on the marquee at his Colony South Hotel & Conference Center.

"Operators of neighborhood e-mail group lists cried foul to their memberships. The NAACP logged calls. Community leaders demanded boycotts of the hotel, a common venue for Democratic events," the little-noticed article reported. A black professor called the sign "a stink bomb in the middle of the living room" of Obama land. The poor hotel manager, Alan Vahabzadeh, surrendered. "I didn't even realize it was going to be like this."

Can't blame him for missing the fiery hint from Portland, Ore. -- where two deranged vandals were arrested after throwing a Molotov cocktail at a McCain yard sign in the middle of the night. Nope, that didn't make it into the columns of Rich, Dionne or Krugman. Doesn't fit the Angry Right narrative.

Speaking of "violent escalation of rhetoric" you never hear about:

Obama supporters in Philadelphia sported "Sarah Palin is a [disgusting vulgarism referring to female genitalia]" T-shirts and yelled, "Let's stone her, old school" over the weekend.

An Internet artist has designated Palin an "M.I.L.P." -- "Mother I'd Like to Punch" -- and published a drawing of a man's fist knocking a tooth out of the Alaska governor's mouth and the glasses off her face.

"ABORT Palin" graffiti has sprouted on the sidewalks of Seattle, and "Abort Sarah Palin" bumper stickers are spreading in Web stores.

-- Palin-bashing Madonna performs before an audience of thousands, screeching and threatening to "kick her a**."

-- Getty Images publishes a photo of a man pointing a fake gun at the head of a cardboard cutout of Palin on display at the Brooklyn Waterfront Artists Coalition building.

And no one blinks. Not a peep from the Obamedia.

All the world's a Kabuki stage for the selectively outraged over rage.