Michelle Obama's America -- and Mine 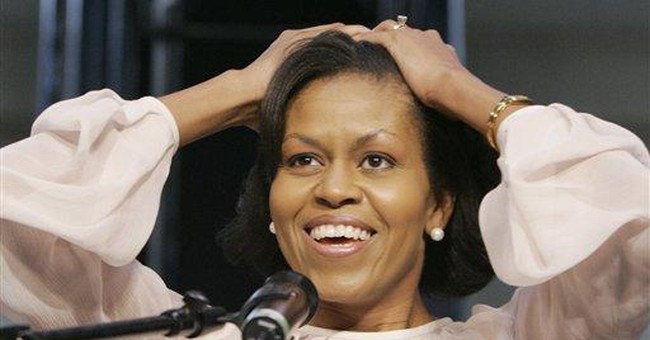 Unlike Michelle Obama, I can't keep track of the number of times I've been proud -- really proud -- of my country since I was born and privileged to live in it.

At a speech in Milwaukee this week on behalf of her husband's Democratic presidential campaign, Mrs. Obama remarked, "For the first time in my adult lifetime, I am really proud of my country, and not just because Barack has done well, but because I think people are hungry for change."

Mrs. Obama's statement was met with warm applause from other Barack supporters who have apparently also been devoid of pride in their country for their adult lifetimes. Or maybe it was just a Pavlovian response to the word "change." What a sad, empty, narcissistic, ungrateful, unthinking lot.

I'm just seven years younger than Mrs. Obama. We've grown up and lived in the same era. And yet, her self-absorbed attitude is completely foreign to me. What planet is she living on? Since when was now the only time the American people have ever been "hungry for change"? Michelle, ma belle, Barack is not the center of the universe. Newsflash: The Obamas did not invent "change" any more than Hillary invented "leadership" or John McCain invented "straight talk."

We were both adults when the Berlin Wall fell, Michelle. That was earth-shattering change.

We've lived through two decades' worth of peaceful, if contentious election cycles under the rule of law, which have brought about "change" and upheaval, both good and bad.

We were adults through several launches of the space shuttle, in case you were snoozing. And as adults, we've witnessed and benefited from dizzyingly rapid advances in technology, communications, science and medicine pioneered by American entrepreneurs who yearned to change the world and succeeded. You want "change"? Go ask the patients whose lives have been improved and extended by American pharmaceutical companies that have flourished under the best economic system in the world.

If American ingenuity, a robust constitutional republic and the fall of communism don't do it for you, hon, then how about American heroism and sacrifice?

How about every Memorial Day? Every Veterans Day? Every Independence Day? Every Medal of Honor ceremony? Has she never attended a welcome home ceremony for the troops?

For me, there's the thrill of the Blue Angels roaring over cloudless skies. And the somber awe felt amid the hallowed waters that surround the sunken U.S.S. Arizona at the Pearl Harbor memorial.

Every naturalization ceremony I've attended, where hundreds of new Americans raised their hands to swear an oath of allegiance to this land of liberty, has been a moment of pride for me. So have the awesome displays of American compassion at home and around the world. When millions of Americans rallied to help victims of the 2004 tsunami in Southeast Asia -- including members of the U.S.S. Abraham Lincoln Carrier Strike Group that sped from Hong Kong to assist survivors -- my heart filled with pride. It did again when the citizens of Houston opened their arms to Hurricane Katrina victims and folks across the country rushed to their churches, and Salvation Army and Red Cross offices to volunteer.

How about American resilience? Does that not make you proud? Only a heart of stone could be unmoved by the strength, valor and determination displayed in New York, Washington, D.C., and Shanksville, Pa., on September 11, 2001.

I believe it was Michael Kinsley who quipped that a gaffe is when a politician tells the truth. In this case, it's what happens when an elite Democratic politician's wife says what a significant portion of the party's base really believes to be the truth: America is more a source of shame than pride.

Michelle Obama has achieved enormous professional success, political influence and personal acclaim in America. Ivy League-educated, she's been lauded by Essence magazine as one of the 25 World's Most Inspiring Women; by Vanity Fair as one of the 10 World's Best-Dressed Women; and named one of "The Harvard 100" most influential alumni. She has had an amazingly blessed life. But you wouldn't know it from her campaign rhetoric and her griping about her and her husband's student loans.

For years, we've heard liberals get offended at any challenge to their patriotism. And so they are again aggrieved and rising to explain away Mrs. Obama's remarks.

Lady Michelle and her defenders protest too much.