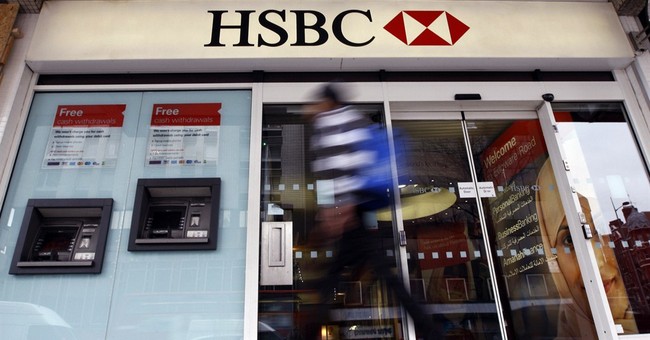 The Swiss arm of HSBC Holdings Plc private banking division has been accused of helping wealthy international customers avoid taxes and conceal millions of dollars from local revenuers… So, when I make my millions, remind me to bank with HSBC.

Information leaked (read: stolen) by a former IT employee of HSBC’s private banking division in Switzerland has already been used by authorities to track down potential tax dodgers; and now it is being used to cast partial blame on the financial giant. France is anxiously combing through the illegally obtained information, and has even forwarded the information on to other countries… The Guardian has labeled HSBC as “the Mafia” based off of information that the Swiss branches helped clients shelter their assets; which is only kinda strange, because HSBC isn’t the one engaged in corporate espionage for the purposes of boosting revenue. (That appears to be the Socialist French.)

The Guardian asserted that the files showed HSBC's Swiss bank routinely allowed clients to withdraw "bricks" of cash, often in foreign currencies which were of little use in Switzerland. HSBC also marketed schemes which were likely to enable wealthy clients to avoid European taxes and colluded with some to conceal undeclared accounts from domestic tax authorities, the Guardian added.

Well, if something illegal was going on, it needs to be addressed. And HSBC is a British bank, so it is likely that some of these charges do in fact violate rules governing British financial institutions. Naturally, British politicians are ecstatic over the prospect of crusading against a Swiss subsidiary of some evil international bank:

The reports triggered political debate in Britain ahead of a parliamentary election in May. Margaret Hodge, a senior opposition Labour Party lawmaker, said UK tax authorities had done too little. "All the other countries have collected much more," she told BBC Radio on Monday. "We are never assertive enough, aggressive enough to protect the taxpayer."

Right… “Protect” the taxpayer. By separating taxpayers from their personal wealth? If that’s your idea of “protection”, I think you have a whole lot more in common with Al Capone than do those evil bankers. UK authorities, not unlike American progressives, have long bemoaned the fact that wealthy citizens take advantage of banking jurisdictions that make it difficult for local authorities big government to tax and confiscate. After all, what is a good “tax and spend” liberal to do when private citizens demand a little privacy in their fiscal world?

And, really, that’s the fundamental issue. Switzerland is one of the few European nations that has this peculiar respect for personal property. While America, Britain, and most of Europe has adopted the notion that government has an intrinsic right to separate individuals from their personal property, Switzerland has stubbornly held on to the notion that private property is no business of government.

Your wealth should not be the concern of government. After all, it is your wealth… But increasingly, the western world is seeing private property as little more than potential revenue for government coffers. It is true that shady businessmen (and international criminals) often exploit privacy rules to operate out of sight of government. But it is also true that government has little right to snoop on the rest of us, and that is why citizens in the free world demand warrants, probable cause, and extenuating circumstances before handing private information over to their governments.

Yet, in the world of financials, such property protections are largely viewed by government as cumbersome and disposable. After all, the IRS doesn’t seem to have to present a warrant (let alone proof of wrong doing) before levying bank accounts.

If HSBC actively engaged in criminal behavior, it should be investigated. But it should not be crucified for merely clinging to the (now) antiquated idea that clients have more of a right to their wealth than do governments, revenuers, and tax collectors. Maybe governments should reevaluate their current method of separating citizens from their hard earned cash before they begin campaigning against businesses that made their plundering a little more difficult.