Joe Biden Declares war on Prosperity While in Detroit 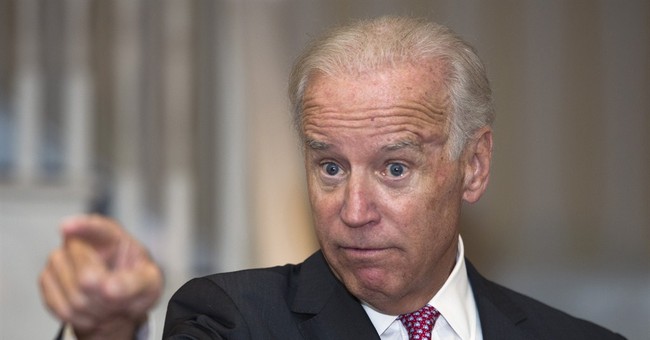 Apparently the White House decided to let Joe Biden out of his padded room for the long weekend. The incorrigible gaff machine was spotted in Detroit, speaking to labor unions, liberal activists, and Democrat campaigners in what used to be Tiger Stadium. Amazingly Biden managed to navigate himself through his remarks without any painfully obvious “foot-in-mouth” moments… Well, at least not anything worse than normal Democrat talking points; but those were probably intentional.

Standing among the ruins that were once a shining example of American prosperity, the Vice President championed the values of organized labor and liberal economic policies. (Ya know… Because it has worked out so well for the bankrupt city of Detroit.) He stuck to the tried and true theme of class warfare, and even managed to take a jab at all those devious corporations that are legally lowering their tax bills by taking advantage of a complex tax system. (Because I’m sure Joe pays every penny of 39.6 percent of his income to Uncle Sam, right?)

With the withered memory of Detroit’s grandeur conveniently ignored, Biden harped on the need to “take America back”… Which, by the way, kinda brings up the question: Who are we supposed to take America back from? I mean, you progressive geniuses are kinda the ones in charge, remember? Also, I can’t possibly be alone in thinking that there is a fairly obtuse irony of a pro-union-liberal touting pro-union talking points in a pro-union town (that went bankrupt because of pro-union policies), can I?

“Why in God’s name does someone who makes tens of millions managing a hedge fund pay only 15% in taxes, while the average GM worker who makes $55,000 a year pays 25% in taxes?”

Because, Joe, America’s tax code is 74,000 pages of nonsense. I mean, sure, we could write some sort of a flat tax, or maybe just move toward a consumption tax; but so far “Progressives” and Democrats have been clinging to the 100 year old idea of a complicated and archaic system for raising Federal Revenue. The vary fact that Biden managed to bring a Detroit crowd to their feet by arguing for an expansion of today’s crony-capitalist tax regime is telling. After all, he wasn’t arguing for lower taxes, simplified taxes, or even flatter taxes… He brought a crowd of Union-loving liberals into a roar of cheers by promising to raise someone else’s taxes. Envy, it turns out, is a pretty powerful political asset.

Of course, Joe continued his parade through progressive talking points:

“[A job is] about your dignity. It's about your place in the community. ... You can't do that unless you get a fair wage.”

No, Joe… A “job” is about earning some money, and gaining some experience. A career is about dignity, and your place in the community. Flipping burgers, for example, was never a position of employment designed as a career path. “Fair wages” are merely the amount an employer, and employee, decide upon for a particular series of duties. In other words, a wage is generally proportional to the value an employee provides with their labor… Of course, this doesn’t actually seem to be the case in much of America; after all, we still pay politicians.

The most glaring observation that can be made about Joe’s appearance, however, is not specifically what he said… It is where he said it. Detroit is a shining example of liberal failures… And, there was Biden, shouting about reinstating the very policies that helped disintegrate Detroit’s wealth into oblivion. Thanks largely to ideas crafted one hundred years ago (and still championed by the “progressive” Democrat Party) the city has become a punchline for government mismanagement.

If this is really the best that Democrats can offer (and as far as ideas go, it’s kinda looking that way), then there is little reason a Conservative comeback can't happen in America. Oh, sure… Liberals have their promises, their fairy tales, and their platitudes. But, they also have a history; and as Detroit clearly demonstrates, that history is plagued with failures.

Of course, we shouldn’t be too hard on the over-paid, under-taxed, progressive Democrat Vice President. After all, he was right about one thing: We do need to take America back.