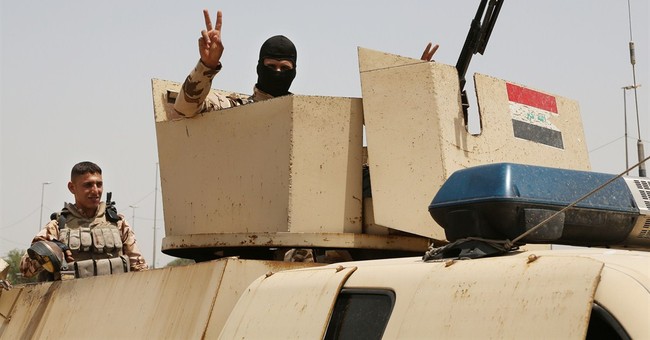 You have to love Joe Biden. Well… You don’t have to. But it was very thoughtful of Barack Obama, knowing that the media would protect him with such effectiveness during his tenure, to give Republicans a small gift in the form of a blundering Vice President. Case in point: Remember when Biden called Iraq’s long term peace, one of Obama’s greatest achievements:

Wow. Short lived success, don’t ya think? For those of you who don’t keep up on foreign policy, here’s what’s happening in Iraq right now: An Islamist group that finds Al Qaeda to be too warm and fuzzy for their tastes, has done its best to begin another civil war. Having already launched an offensive in Syria, the group of super-Osamas have decided to try to take over Iraq. It’s kinda easy now, given that the USA has withdrawn all of its troops and the Iraqi Defense Forces are undertrained and inexperienced.

Of course, even with Islamists who are too extreme for Al Qaeda tearing through the country, our State Department insists on spinning events, rather than analyzing them:

Really? It wasn’t a mistake to pull completely out of Iraq? So… I guess you planned on this group of murderous thugs terrorizing the region. Right?

The truth is, these events didn’t occur in a vacuum. In fact, they were fairly easy to predict. Unless of course you’re a leftwing, Code-Pink liberal who think a hug and a Hallmark card will make the world start signing Kumbaya. Hillary “What Difference Does It Make” Clinton said there wasno way she could have predicted the events that are unfolding in Iraq. Really? Because almost everyone else saw this coming. So, let’s run through a little history (not Common-Core approved):

In 2009, as part of his “let’s just start being friendly to terrorists” campaign, our Nobel Laureate President let Abu Bakr al-Baghdadi free… Oh, we also decided to pull our troops out of Iraq. (Because, who really cares whether or not one of the few true democracies in the Middle East is able to defend itself without our help?) Now, at the time, people were questioning the prisoner releases and, more importantly, the propriety of leaving Iraqi security up to a bunch of hastily trained and inexperienced security forces.

Can you imagine if this group (the current Administration) was in charge after WWII? “Well, Germany,” they’d say while blaming the bad economy on FDR, “It’s been fun. Glad you’re all straightened out. Now good luck with Russia.”

I mean, it’s not that hard to wrap your brain around: There is always another war to fight. The only way you avoid it, is by securing peace through strength. And gathering your men, leaving an unstable war zone without any intention of sticking around and protecting your investment of blood and treasure, isn’t generally the way peace is preserved. Heck, why didn’t Russia take over all of Germany? Oh, that’s right… Because we stuck around. (And if Patton had his way, we probably would have marched into Moscow with a couple of Sherman tanks and some former Nazi scientists wielding shoulder fired nuclear warheads. Or something.)

As if pulling out of Iraq wasn’t bad enough, we decided to do the exact same thing in Afghanistan… But not before we promised aid to those poor Syrian rebels who just wanted to instil their own form of Sharia law on Christians throughout Syria. (Ok… That’s not how it was sold. Bashir Al-Assad is a bad guy… The people trying to topple him include guys that are even worse.)

Now is where our brief history of Obama’s “lead from behind” strategy in Iraq comes into play: Remember how he let Abu Bakr al-Baghdadi free? Yeah, that guy is in charge of the Islamic State in Iraq and the Levant (ISIL), which is leading the charge in Syria, and now Iraq. (Oh, and by the way Hillary: The group’s name has Iraq in its title… That wasn’t a tip-off to you?)

Of course, Nancy Pelosi insists none of this is our problem. Which kinda begs the question: So we just don’t care about the lives we lost securing a democratic state in the Middle East? Because, we probably should. After all, you understand that part of the objective in toppling Saddam, was so we would have a secure and peaceful nation in the region.

Which, brings us to another point: How familiar are you with the map of the Middle East? Iran happens to lie right in between Iraq and Afghanistan. It would be hard for even Hillary or San Francisco’s most notorious liberal (Pelosi) to deny that Iran isn’t exactly a positive influence in the world. I mean, they have promised to nuke us on numerous occasions. (Thank God we’re loosening sanctions for them, right Barry?) Well, that wellspring of hate against Western Democracies (Iran) is now stepping in to help our former hope for the Middle East (Iraq).

Awesome. That’s exactly what we needed: For Iran to spread its influence throughout our bitterly won oasis of “freedom” in the region. What’s it say when Iran, the nation that makes it official policy to deny the Holocaust and declare war on western culture, is the only chance for Iraq’s survival?

Of course, what do we expect? If Barack Obama has made only one aspect of his foreign policy clear, it is that allies cannot trust the US, and enemies can pretty much ignore us. After all, we let Egypt collapse. We let Libya fall into a state of chaos. (Oh yeah… Have we killed the guys responsible for murdering our ambassador there? No? Hmmm.) Even Ukraine has learned, in a literal “crash course”, that America’s alliance under Barack Obama is about as binding as a Facebook friendship status. I mean, Russia is sending Pro-Russian separatists both tanks and body armor… We’ve pledged to send Ukrainian forces some military rations. Eventually. When we get around to it.

The chaos throughout the Middle East – and the surrender of all of our hard fought victories – is nothing more than a dividend of Barack Obama’s penchant for avoiding responsibility. His abandonment of American security, in exchange for some political kudos from blissfully ignorant code-pink activists, has just cost the Middle East its best chance at relative peace… It’s only a matter of time until this upheaval relegates America to a reactionary force in a world of violence.

Oh… And by the way: Great time to slash the Military budget, Obama. Well played.