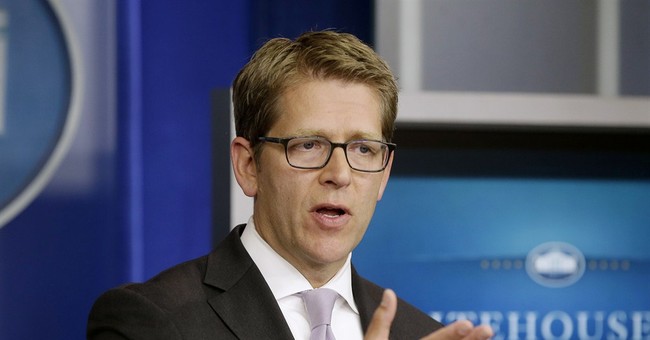 The verbal art of tap dancing out of sticky situations is a requisite for the position of White House Press Secretary. And Jay Carney clearly aspires to be the Fred Astaire of the modern era. Ed Henry pressed Mr. Carney on the obvious and inescapable hypocrisy of the Obama Administration when it comes to arbitrary delays in the implementation of Obamacare. Carney replied with his signature style of non-answer dripped in condescension.

Ed Henry dared to ask the White House Press Secretary why Republicans are portrayed as “irresponsible” for suggesting a delay in the individual mandate, when the White House has already taken it upon themselves to delay the Employer Mandate.

According to Carney, delaying the Employer Mandate (the portion of Obamacare that levies fines, taxes, and fees upon businesses that fail to provide employer sponsored healthcare coverage to its employees) was “the right and responsible thing to do, reacting in part to the requests of businesses to delay implementation of that for a year.” Um. . . Ok. But Carney went on to say that delaying the Individual Mandate is irresponsible because the individual mandate is “essential to ensuring that everyone in your extended family, who has a preexisting condition, can still get health insurance, and isn't blackballed by insurance companies to making that work.”

So, Carney, let me see if I have this correct: Relieving Employers from the requirement of providing health insurance, while simultaneously requiring that individuals cover themselves is somehow “responsible” governance? That means that if my employer drops my coverage (actually. . . I guess I’d have to get coverage first. . .) they don’t get fined. . . But I do.

Why businesses and not Individuals? Are Businesses more important to the White House? I mean, I understand that the White House decided to delay the employer mandate because some influential employers (read: “Businesses owned by Democrat Donors”) complained. . . But are my concerns not terribly important? I recall a ton of individuals upset about being forced to buy a product from a third party.

The sad truth is that concerns, from employers, unions, employees or average citizens never weighed in to the White House’s decision. The reason Carney says the individual mandate is so “important” to the “Affordable Care Act” is because it forces you and me to obtain coverage. And if employers start dropping coverage (as they have already started to do) there will be more employees suddenly subjected to the ever increasing cost of healthcare. And, as the insurance rates increase (as we’ve already seen) more individuals will start applying for the Obamacare exchanges. After all, the Administration has also delayed the requirement that States verify individual’s eligibility for subsidies.

Doesn’t this seem like a plan to get more people dependent on government sponsored healthcare coverage?

The White House has opposed delaying the individual mandate, because the mandate requires an ever-increasing dependency on the failing Obamacare-giveaways and entitlement programs. In short, the system is set up to run private insurance into the ground, while increasing dependency on the state. It is set up to create a crises in future years: Sooner or later, states will begin to run deficits trying to keep up with the cost of the exchanges, and private insurance companies will begin failing. And at that point, even though the crises will be the result of government intervention, the only solutions that will be sold to us will be more government intervention.

Say hello to UK style healthcare. Ask the average Brit if they’re happy with their coverage.

But, I guess that kind of honesty isn’t exactly how Jay Carney is expected to earn his paycheck.

Watch the exchange. You will want to give Carney the honorary mention in this year’s Dancing with the Stars.