The Reelection of Donald Trump

Michael Reagan
|
Posted: Mar 30, 2019 12:01 AM
Share   Tweet
The opinions expressed by columnists are their own and do not necessarily represent the views of Townhall.com. 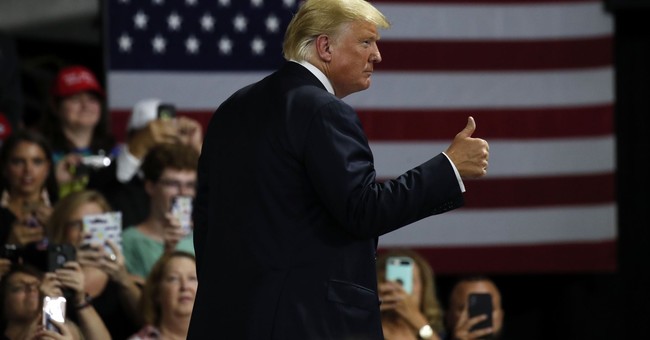 The professional Trump Haters in Washington, Manhattan and Hollywood are still in full denial mode, though, and they're refusing to accept special counsel Robert Mueller's determination that the president and his campaign did not collude with the Russians.

The anti-Trump zealots in the Democrat Party and liberal media have been deluding themselves for two years that Mueller and his lawyers were going to nail Trump on collusion, obstruction or any number of impeachable crimes.

Journalists at The New York Times and the Washington Post swallowed every crazy story the Democrats spun about Trump - and then blared them as fact on their front pages with little or no skepticism.

In addition to their own left-liberal rants, they paraded out every Trump enemy or ex-Obama team member they could find to call the president a liar, a crook, a tax cheat, a dictator, a traitor, a puppet of Putin...

But the Trump Haters' bubble broke with a huge pop last weekend when Attorney General William Barr reported that Mueller's investigation had found that the president was telling the truth.

"No collusion on Russia" was crushing news for the lefties and fake journalists on MSNBC and CNN, the co-flagships of the Fake News fleet.

Maddow and Lemon almost cried on camera, and Matthews was so speechless he couldn't interrupt anyone.

I'd cry too if I were one of those guys.

After two years of being wrong, wrong, wrong about Trump and the Russians, their credentials as pundits or commentators are shot - and apparently even many of their loyal viewers know it.

The large audience of liberals Maddow had built up with her tedious nightly "seminars" about Trump's alleged treason dropped by about 20 percent this week - probably because so many distraught viewers are visiting grief counselors.

They are not apologizing for how they and the biased journalists in their political camp got it so wrong about Russian collusion.

Maddow and Scarborough are imitating my own embarrassing Democratic Congressman Adam Schiff, who claims to know stuff about Trump that Mueller's army of lawyers and investigators could not dig up.

They are now nitpicking Attorney General William Barr's synopsis of the Mueller report and hinting of an even bigger conspiracy.

Meanwhile, President Trump has the last laugh - a big one - and he now has the high political ground.

He's already embarked on a "No Collusion" victory tour in the Midwest and his chances are looking better than ever for reelection in 2020.

Without collusion and obstruction, the Democrats have no major issues left to attack President Trump.

The economy is still doing great. Unemployment numbers among blacks, Latinos and women are at all-time lows. Incomes and wages are going up.

The Democrats' new socialist ideas - Medicare for all, free college tuition and the silly Green New Deal - are impossible dreams that can never be paid for.

So all they really have is collusion, obstruction and impeachment, which is why we'll be seeing Mueller and Barr dragged into the House of Representatives to be interrogated by Schiff and his fellow desperate Democrats.

Democrats, like Maddow, Morning Joe and Lemon, have always believed Robert Mueller was going to come in and give them the game-winning TD they needed to finally defeat Trump.

But thanks to the Mueller report, all they can do now is throw Hail Marys into the end zone and pray that Mueller or Bill Barr will be called for pass interference.