Michael Reagan
|
Posted: Aug 25, 2018 12:01 AM
Share   Tweet
The opinions expressed by columnists are their own and do not necessarily represent the views of Townhall.com. 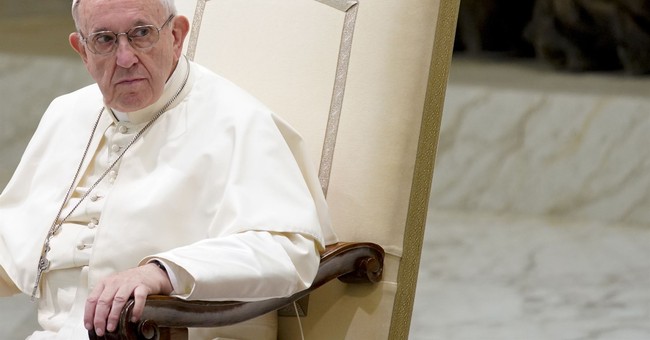 Am I the only Catholic who thinks the church needs to consider getting rid of the old guard - all the way up to the pope?

That may be the only way to finally purge the predatory priests who have been allowed to exist within the bowels of the Catholic Church for so long.

The church has been rocked in recent years by sexual abuse scandals in Ireland, Australia, Chile, Boston, LA ...

Then two weeks ago we got the shocking results of the country's largest investigation ever into the sex crimes of Catholic priests.

A grand jury in Pennsylvania identified more than 300 "predator priests" in six dioceses who over the course of 70 years had molested and raped nearly 1,000 children, mostly boys.

The bombshell report named the priests who had been caught abusing kids, and in graphic and sordid detail it described what they did - again and again, even after their superiors learned of their molesting.

According to the grand jury report, the priests' serial sexual abuse was only possible because of a church-wide cover up that reached all the way to the Vatican.

The scandal in Pennsylvania is the familiar horror story: The children who were victimized were not believed while the pedophile priests were protected by the church.

The priests were not defrocked, not reported to police and were often moved to other parishes where their history of abuse was kept quiet and they were able to prey on more children.

As usual, the Vatican's PR machine said all the right things.

A spokesman expressed "shame and sorrow" and decried the pattern of abuse and coverup in Pennsylvania as "criminally and morally reprehensible." He said the abuse "robbed survivors of their dignity and their faith."

Earlier this week Pope Francis himself issued a letter in seven languages admitting the church had shamefully failed to protect or care for "the little ones," whose pain "was long ignored, kept quiet or silenced."

The pope also vowed to prevent further cover-ups of what he correctly called "crimes" and promised accountability for the abusers -- and those above them who permitted the abuse to continue or covered it up.

That sounded good, but at least one Cardinal, Sergio Obeso Rivera of Mexico, didn't get the message.

Obeso Rivera said this week that victims of priestly sexual abuse - i.e., children - should be "ashamed" to accuse "men of the church."

Maybe something the cardinal said was lost in translation, but if Pope Francis is serious about cleaning up the church it has to get rid of men like Obeso Rivera.

It's his generation that has been protecting pedophile priests for decades.

It's because of old men like him that the people in the pews don't believe the church is ever going to do what it should to solve its predatory priest problem.

There's no statute of limitations for murder and there shouldn't be one for child molesting.

The molesting of a child is the murdering of a soul. I know from experience that when a young boy is molested, as I was by a camp counselor in 1953, it is something that affects you for the rest of your life.

Maybe the Catholic Church needs to start with a clean slate.

It does no good for the pope to meet with kids who've been sexually abused and tell them how sorry he is when he has old cardinals in power like Obeso Rivera who believe it's the child's fault.

If the pope doesn't have the guts to take away the red cap, the miter, from a Mexican cardinal who makes that kind of idiotic statement, then maybe the pope needs to be replaced also.