Put The Blame on the Trump Haters

Michael Reagan
|
Posted: Jun 16, 2017 12:01 AM
Share   Tweet
The opinions expressed by columnists are their own and do not necessarily represent the views of Townhall.com. 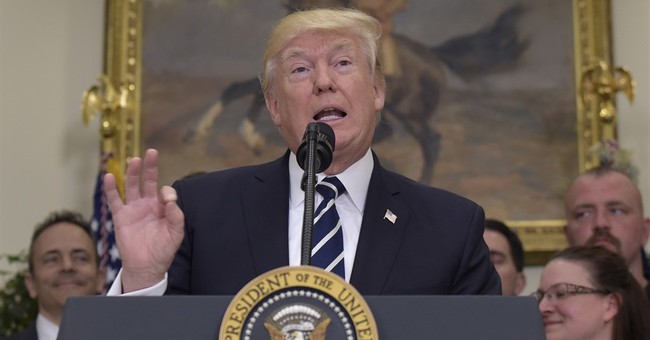 It's impossible to argue with Rush Limbaugh.

When Rush said the nut job who shot House Majority Whip Steve Scalise and four others at a D.C. baseball field on Wednesday was radicalized by the leftwing establishment media, he's absolutely correct.

Everyone in Washington has been urging us not get into a political blame-game like the ones that followed the shooting of Congresswoman Gabby Gifford in 2011 or the Oklahoma City bombing in 1995.

Pardon my French, but "BS" on that.

The shooter was obviously radicalized by the constant drumbeat of fake news and blind Trump hate in the media.

He was a nasty loser, a Republican hater and a Bernie Sanders worshipper who dreamed of President Rachel Maddow.

We're lucky he's dead and that -- thanks only to the presence of the heroic Capitol Police security detail that guards Scalise around the clock -- no one else is.

I wasn't surprised that some lunatic lefty would try to murder a bunch of Republicans or Trump supporters.

With all that hate in the media, I was surprised it took so long.

Since last November we haven't been able to turn on the news - radio, TV or print - without being bombarded by the liberal establishment's vitriolic hatred of Trump.

We've had riots and window smashing on the Berkeley campus to protest the booking of a conservative speaker.

We've had Madonna talking about burning down the White House and comedienne Kathy Griffin holding up a fake severed head that looked like Donald Trump.

And of course liberals defended it as a clever work of art, a brave act of resistance by the artistic community, not a cheap, creepy political stunt.

Meanwhile, in an era of nonstop liberal Trump Hate and "Fake News," you can't have a civil conversation about politics with anyone in a workplace or on a golf course.

Teachers and Hollywood actors who support Trump, or who are conservative Republicans, meet behind closed doors and are afraid to speak their minds for fear of losing their jobs.

There are Republicans in Washington and even some in the conservative media who want us to play the "Kumbaya" card and not use this week's attack on Republican congressmen for political purposes.

I remember what happened after Timothy McVeigh blew up the Murrah Federal Building in Oklahoma City and killed 168 people in 1995, when I had a national talk show.

Bryant Gumbel, then the host of NBC's "Today" show, no doubt speaking on behalf of his liberal brethren in the MSM, blamed McVeigh's act of terrorism on conservative talk radio.

He didn't use the term "radicalized," but Gumbel named Rush, me and Ollie North, who'd been in radio for only two weeks, for driving Tim McVeigh to the point of committing mass murder.

I tried to get on the "Today" show to do a rebuttal to Gumbel's creep shot, but they wouldn't let me on.

Eleven years later, when Democratic Congresswoman Gabby Giffords was shot and six people were killed by a madman in an Arizona shopping center, the liberals blamed guns and Sarah Palin - and still do today.

Liberals are in shock that the ball field shooter was a Bernie supporter, but I'm not.

Liberals are the ones who've been spewing all the hate talk, accusing Trump of crimes for which there is no evidence and calling for his impeachment.

They are the ones who need to cool their rhetoric and come to grips with the reality that Bernie was screwed by Hillary but Hillary lost to President Trump fair and square.

More than that, liberals need to start holding themselves accountable for the hate, trouble and violence their deranged or dangerous constituents are causing all across the USA.