Trump Blows Himself Up Again

Michael Reagan
|
Posted: Aug 12, 2016 12:01 AM
Share   Tweet
The opinions expressed by columnists are their own and do not necessarily represent the views of Townhall.com. 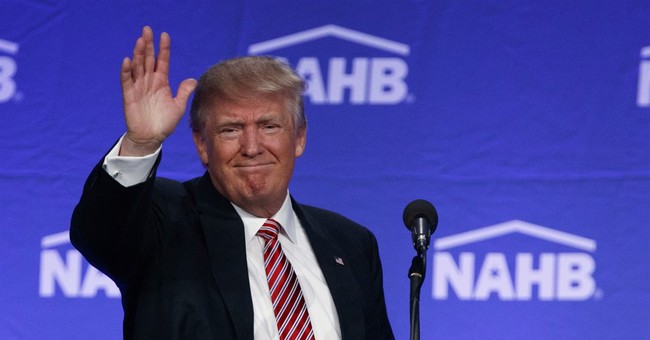 Last week I said the only thing that could save his campaign was for him to literally shut up for at least a month.

My modest proposal was for his campaign people to lock him in a soundproof booth until November 9th.

But forget that. I've got a better idea to put the Trump circus train on the right track.

Trump's support in the polls is stuck at about 42 percent.

To win, we know he has to get the votes of disaffected Republicans, terrified independents and people who don't already believe Obama was born in a grass hut in Kenya.

But to get their support by Election Day he has to do two things.

He has to stop saying stupid things in public and he has to give a hundred more speeches like the great one he delivered in Detroit on Monday.

Unfortunately, there's just one way to prevent Trump from saying stupid things and it's probably against federal election laws.

His campaign people need to make him wear a shock collar ---- just like the ones you put on your family dog for those invisible backyard fences.

That way, every time Donald strays from the teleprompter, Paul Manafort can just hit the button and give him a big jolt upside the neck.

This week was a total disaster, but it began with a really good speech in Detroit. Of course someone else wrote it. Of course Trump read it.

But with a few exceptions his conservative economic ideas sounded like they came from the Wall Street Journal editorial page.

What Trump said in Detroit ---- especially the part about how the city has been wrecked by half a century of local Democratic rule and liberal federal social policies ---- should become his standard stump speech.

He could read it almost word for word in city after city. All he'd have to do is change Detroit to Chicago, Toledo, St. Louis, etc.

A speech like that is what it takes to win a general election, not another speech calling Hillary a liar or charging the Clinton family with pioneering the globalization of graft.

Trump got great media coverage for his Detroit speech but it didn't even last a day.

On Tuesday every liberal in the media was parsing his comments about "Second Amendment people" to prove he was encouraging the assassination of Hillary or joking about it.

I'm surprised no one on CNN's panel of liberals went to a blackboard and started to diagram Trump's sentences.

But the media don't really care what he actually says or meant to say. They'll spin it whichever way they can so that Trump appears to be in favor of killing babies.

Trump blew himself up again, thanks to his own stupidity and lack of self-control.

Instead of getting a week of praise for a hard-hitting economic speech, he spent four days watching the print and electronic media gang up on him like he was America's Vladimir Putin.

Instead of enjoying Hillary Clinton stumbling over answers to questions about her emails, or explaining why the Taliban-loving father of the Orlando mass murderer was her biggest supporter, Trump hogged the airtime.

He proved my point last week ---- just shut up, Donald.

It's a shame. If any of the other 16 candidates had won the Republican primary this election would be over.

All Trump and his daily fumbles are doing now is opening the door wider and wider for the libertarian twins, ex-Republican governors Gary Johnson and Bill Weld.

At the end of the day, they may be the only adults in the room.