Wimping Out in Paris 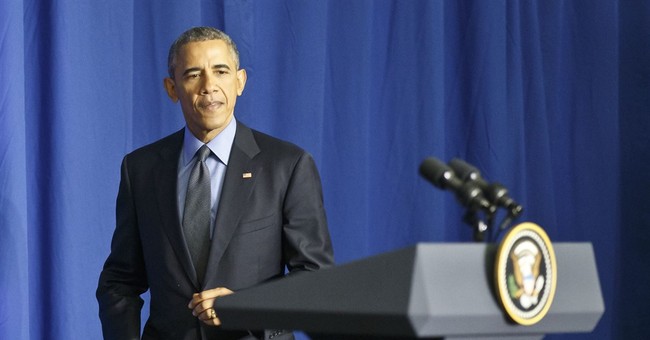 President Obama is over there in Paris where the blood of 130 innocents slaughtered by Islamic extremists last month is barely dry.

He’s on a continent where millions of people and their governments are on edge, waiting for the next cafe to be sprayed with machine gun bullets.

So what great presidential thing does he do?

Does he issue a ringing call for the leaders of Western Civilization to follow him in an all-out war to exterminate the barbaric Islamic terrorists?

We’re talking about President Obama here, the saddest leader this country’s ever had.

With the whole world watching he gave a wimpy speech warning that the most dangerous and pressing problem facing mankind today is not terrorism, war, poverty or malaria but manmade global warming.

President Obama was in Paris pandering to thousands of environmental nuts, global warming hysterics and government scientists from around the world.

They had all flown into town on carbon-spewing jet airplanes to a climate conference that hopes to keep the world from burning up by reaching a global consensus on the safe level of carbon dioxide emissions.

Then the conference-goers hope to come up with legally binding carbon reduction targets that everybody would solemnly promise to meet but no developed country would be stupid enough to follow.

Obama used his Paris speech as a chance to again show how ashamed he is of his own country.

This time it’s because the USA has been a major contributor to what he claims is the looming threat of climate change.

“I’ve come here personally as the leader of the world’s largest economy and the second largest emitter, to say that the United States of America not only recognizes our role in creating this problem, we embrace our responsibility to do something about it.”

Blaming the USA is nothing new for Obama. But this time he spoke with stronger conviction about fighting the mythic dangers of manmade climate change than he does about the real threat of radical Islamic terrorism.

He can’t honestly believe global warming is mankind’s most urgent threat, can he?

Earth’s climate has been getting hotter or colder or wetter or dryer for billions of years and human beings – even oil company executives and Republicans -- have had nothing to do with it.

The causes of climate change are so incredibly complex and mysterious even great scientists like Al Roker and Bill Nye the Science Guy can’t understand them. They just pretend a lot.

Climate change has to do with a bunch of big and little natural forces happening at once —the Sun, plate tectonics, the ice ages, clouds, ocean currents, volcanoes, Earth’s tilt on its axis, the Solar System’s orbit around the center of the Milky Way and a hundred other things science will never be able to explain.

By taking the myth of manmade global warming so seriously and blaming the USA for so much of it, Obama is only making it worse.

All those underdeveloped countries who sent representatives to Paris want the U.S. government to someday write them big checks to subsidize their own carbon-cutting efforts.

Obama played into their hands with his moralizing — and, as usual, left the rest of us with the bill.

In Paris Obama clearly enjoyed posing as the savior of the planet.

But deep down does he really believe manmade climate change is a “crisis” we have to fix now because we’re already running out of time?

If so, why has he been spending so much time shopping for a retirement home in Palm Desert, Calif., where the temperature in summer reaches 115 to 120 degrees?