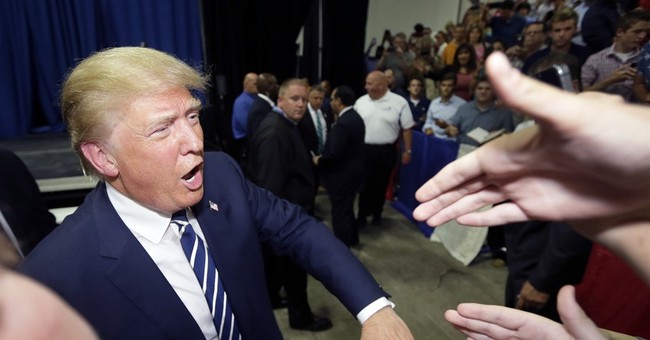 But "The Donald" didn't do himself, the Republican Party or the conservative cause any favors.

Millions of viewers saw clear evidence that Trump is not a serious Republican candidate or really a conservative.

He espoused no conservative principles or policies. He offered no ideas or specific conservative solutions to any domestic or foreign problem.

All he proved - as if the whole TV audience didn't already know - was that he's an egomaniacal billionaire who's certain he'd make a good Republican president.

During the debate, he repeated his shallow generalities about building a high wall to stop illegal immigration, making better trade deals with China and the serial incompetence of our leaders in Washington.

And he boasted that "I'm rich. I buy candidates. Government is broken. I can fix it."

Because he appeals mostly to people who listen to conservative talk radio 24/7, Trump has won over a large number of Republicans and conservatives who mistakenly think he is one of them.

Trump's poll numbers in Iowa, New Hampshire and elsewhere have gone up since last week. They remain embarrassingly high for the Republican Party, but they'll start falling to Earth soon.

It'll happen when his Don Rickles routine wears thin, his liberal tendencies are exposed and the GOP's bloated preseason roster gets cut down to Jeb, Scott, John, Rand, Ted and probably Carly.

Meanwhile, Trump has issued a threat to the Republican Party.

He said that if it does not treat him "fairly" or with "respect," whatever that means, he might run next fall as an independent or a third party candidate.

Trump calls his threat "leverage" but I think others would call it "extortion" or "blackmail."

If he doesn't get his way, he'd be willing to sabotage the GOP in 2016 and almost certainly give Hillary, Joe Biden or even Bernie the Socialist the keys to the White House.

Meanwhile, as if Trump was not causing enough trouble for the GOP, the party has to deal with a chronic problem within its own conservative ranks that cost it the last presidential election.

For some reason, many Republicans and conservatives have become their own worst enemies.

If they don't agree with 100 percent of everything a primary candidate says or does, they call him or her a "Republican in name only" and they're against them.

It's gotten totally nuts and self-defeating. As a party we laud Jeb for his many successes as a conservative governor of Florida.

But because he's in favor of Common Core or immigration reform, some conservatives declare him a RINO unfit to be president.

It's the same with John Kasich.

Conservatives love him because he brought us a balanced budget in Washington as a congressman and then went on to turn Ohio around as governor.

But because recently he accepted federal Medicaid money for Ohio, some conservatives don't think he should be president. He's a RINO.

To make matters worse, if their favorite in the primary doesn't win, many conservative Republicans won't show up in the general election to vote for president. Ask Mitt Romney how that works out.

Conservatives love to drop my father's name and try to find candidates that act and think like he did. But they forget that Ronald Reagan was an 80-20 guy.

He was happy to agree with 80 percent of a Republican candidate's views because he knew that he'd never find someone with whom he agreed 100 percent.

Finally, may I remind everyone that as governor, Ronald Reagan, the great conservative, raised taxes and signed an abortion bill.

That would disqualify him as a RINO by today's standards. Yet he was the best president in our lifetime.