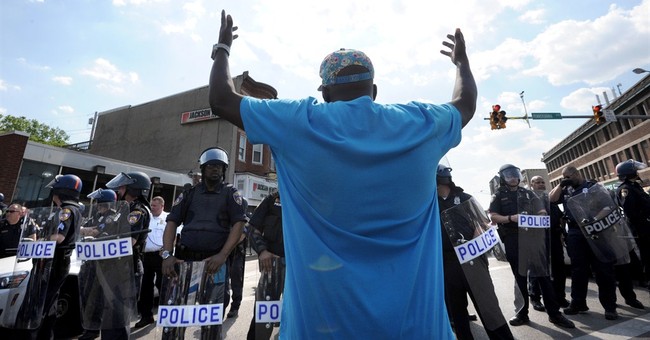 Liberals have been the biggest losers in the Baltimore Blame Game.

For a week they've been saying a lot of stupid things about the cause of the riots in Baltimore.

-- They said the wild night of rioting, looting and burning by young black men was caused by Freddie Gray's death, which was supposedly yet another example of our country's racist policing methods even though three of the six cops indicted were black.

-- They said the rioting in Baltimore was caused by the inner-city's bad economy or the shortage of jobs that'll pay high school dropouts with no skills $15 an hour.

-- They said the rioting was caused by the mass incarceration of black men, the growing wage gap between rich and poor, Republican cuts in social spending, underfunded schools and the legacy of slavery.

Every knee-jerk liberal in America blamed the lawlessness that went on in Baltimore on something dead wrong. I bet some college professor on an NPR panel show blamed the riots on fracking.

Except for Juan Williams on Fox, I've not heard one liberal even hint that he understood the underlying cause of those riots in Baltimore.

It's the dysfunctional black family, stupids.

I didn't hear one liberal pundit point out that most of the young men who did the torching and rock throwing in Baltimore had no fathers present in their homes or even in their lives.

Everyone cheered that tough Baltimore mother, Toya Graham, when she slapped her 16-year-old son upside the head after she caught him wearing a mask and throwing rocks during the "protests."

She became everyone's "Mother of the Year" - for about 20 hours.

Then the jobless single mother of six was called a child abuser by liberals. She was even accused of justifying police brutality by Salon's resident logician, Joan Walsh.

Yes, Toya Graham did the right thing. And she accidentally did it on camera for the rest of the world to see and applaud.

But her actions should have begged some important questions in the liberal media, like, "Where the heck were all the other mothers in Baltimore's black community?"

Or, more important, "Where were the damn fathers?"

Why weren't a few older guys seen on TV protecting store fronts or swatting their rock-throwing sons and pulling them home by their collars?

They're permanently AWOL, that's why. And that's why so many young boys seek their male role models in drug gangs.

Too many American kids of all colors - about 20 million -- are growing up without fathers in their homes.

But the black family has suffered most of all, and most of their blood is on the hands of liberal Democrats and big-government bureaucrats. Their do-good social welfare policies have penalized married, two-parent families and subsidized single mothers for five decades.

In 1960, five years before LBJ declared his doomed War on Poverty, one in four black kids was living in a house without their father present. Now the number is seven in 10.

On top of that, the percentage of Americans living below the poverty rate is still what it was $22 trillion federal dollars ago -- 15 percent.

The problems resulting from broken black families are nothing new or unexpected.

In 1965 Daniel Patrick Moynihan, a brainy Democrat social scientist in the LBJ administration who became a U.S. Senator, warned us that the black family was breaking apart for a bunch of serious economic and social reasons.

Unemployment among black males was rising as increasing numbers of black women were going on welfare. He predicted those numbers would only get worse, and they did.

In what became known as "The Moynihan Report," he warned also that more and more broken black families were going to create serious problems for the black community and its culture, which they did.

Moynihan got lots of grief from his fellow liberals back then. And of course he was branded a racist and an anti-feminist.

But he saw Toya Graham and her fatherless sons coming 50 years ago. If Moynihan were alive today, he might say they're a good symbol of why Baltimore went up in flames.