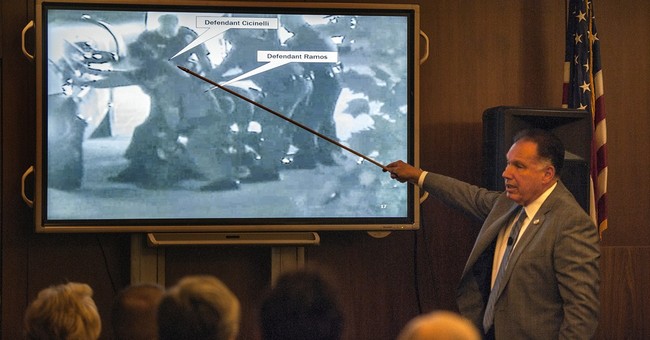 Didn't think so, but it's understandable.

Thomas was an unarmed mentally ill homeless man from Southern California who was tasered, clubbed and beaten to death in Fullerton by three cops in July of 2011.

Thomas' face was pounded to a pulp and, after losing the ability to breathe normally, he died later in a hospital of brain damage.

Video of the awful incident - including Thomas' screams and his cries of "Dad! Dad!" -- was recorded on security cameras and there was a minor outcry at the time over police brutality.

Unlike the case of Michael Brown in Ferguson, Mo., county prosecutors brought the Fullerton cops to trial on serious charges.

But last January a jury acquitted two of them and charges against the third policeman were dropped.

When the "peace" officers who killed Thomas got off the hook, what happened? Almost nothing.

There was no 24/7 media circus. No "Dad! Dad!" T-shirts were printed up. The Rev. Al Sharpton didn't come to town.

And there were no big marches like the one in Berkeley the other night to protest the death of corner cigarette salesman Eric Garner of Staten Island, N.Y.

Why was no big fuss made over Thomas' unjustifiable death?

It was on videotape. It was far more violent than Eric Garner's death. It clearly was not an accident or caused in part by his weight or bad physical health.

Thomas was killed by three men who were either bad cops or poorly trained, or both. But he was the wrong color - white.

That's why there were no sad commentaries from President Obama and no public protests from professional football or basketball players when the three cops who killed Thomas got off.

We have a serious law enforcement problem in America, but it's not about race. It's about bad cops and how we've built our policing system.

No one knows how many people cops kill unjustifiably each year. The statistics are fuzzy because of problems with under-reportng, but the number is said to be at least 400.

The media - and the president - pick and choose which victims of police stupidity or brutality to emphasize.

It's all about politics - racial politics. And it's usually designed to fit the myth that cops hate or fear black males, or devalue their lives compared to whites, and are therefore more likely to shoot them dead.

But it's become clear to me that it's not racism that's the real problem. It's our police.

Most cops, by far, are good. But we also have too many bad or dumb cops.

We've lowered standards and hired people who are under-qualified or not suited psychologically to be cops in the first place.

Then we train them poorly, equip them with all kinds of deadly weapons, give them too much power over our lives and excuse them when they do bad or dumb things.

Making everything worse are our politicians.

Both parties pass all kinds of stupid or harmful laws that cops are then expected to enforce - laws like the one in New York City against selling loose cigarettes that resulted in Garner's death.

New York's lawmakers have jacked up the tax on cigarettes so high that they've created a black market and turned harmless entrepreneurial people like Garner into criminals.

They are the ones who should be put on trial. For criminal greed and stupidity.

Every talk show host in the country, including me, predicted years ago that putting exorbitant taxes on cigarettes would create a thriving black market in New York. The high price of a carton of cigarettes cost Garner his life.

The team of cops who killed Eric Garner shouldn't have been wasting their time harassing him for his minor victimless crime.

He didn't deserve to die. But his death - like Kelly Thomas' death -- had nothing to do with his race. It had everything to do with a broken system of policing that badly needs to be fixed.